Can No Drama Obama Stare Down A Confederacy of Dunces? 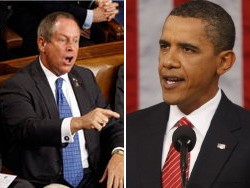 Moderate voters are baffled, liberals are protesting, and progressives are despairing, “Obama’s a puny reform-change agent, hardly a good liberal, and no antidote to enduring Bush-Cheney crimes. The raving right can’t stand him, the activist left is up in arms, and the mushy center isn’t holding.” Yikes.

After my own bellyaching, I understand these outbursts, quipping this pragmatic, “devout non-ideologue” is tarnishing both pragmatism and devout non-ideology. How can “pragmatism,” work when devoutly allergic to risk-taking and inclined to “let’s make a deal” giveaways? Forget kinship with FDR or LBJ: here’s another naïve outsider Washington bullies pick on like the famed 90 lb. weakling. Without more chutzpah, Obama risks Clinton’s fate, set up as bulls-eye for every redneck pipsqueak brandishing his popgun? Obama’s vacant “yes, we can” call to now evokes for many Kris Kristofferson’s acerbic lyrics, “freedom’s just another name for nothing left lose.” Could Professor David Michael Green possibly be right, “Eight months into it, it now seems pretty clear that the Obama Administration is finished”? So soon?

I pulled back and waited for a Howard Beale moment, the chance I had it wrong. What if Obama isn’t weak-kneed but omniscient and strategic, as subtle and sly as Bush-Cheney twins were coarse and crude? What if presidential nobility can eventually paint renegade rednecks in a corner, where they shoot themselves in the foot? Two reversals came just this week: paranoid parents fretting Obama would “indoctrinate” munchkins were routed, shown up as pathetic bullies by Laura Bush; likewise, Joe Wilson’s “You lie” incivility was slapped hard by GOP hardliners as even too hard for them.

Howard Beale was that distraught newscaster in the brilliantly dark, 1976 satire “Network,” so “mad as hell” he wouldn’t take it any longer. With astonishing prescience about our Age of Corporatocracy, the oracular scene shows Beale’s outrage transfigured by the god-like Arthur Jensen, the “business-is-reality” prophet whose sermon illuminates the last eight years – and the last eight months:

There is only one holistic system of systems, one vast and immanent, interwoven, interacting, multivariate, multinational dominion of dollars … the international system of currency which determines the totality of life on this planet. That is the natural order of things today … There is no America. There is no democracy. There is only IBM, and ITT, and AT&T, and DuPont, Dow, Union Carbide, and Exxon. Those are the nations of the world today … The world is a college of corporations, inexorably determined by the immutable bylaws of business … one vast and ecumenical holding company, for whom all men will work to serve a common profit, in which all men will hold a share of stock.

This oration of course satirizes corporate paternalism with workers blessed as full owners – dream on, then or now! Say what you will about Obama’s top-down band-aids, however, he does understand the underlying tectonics of world capitalism, with bankers’ capital needed to power energy and climate change solutions. Thus speaks the 50% rally worldwide by stock and bond markets. Compare Obama, the rainbow internationalist, getting these “interwoven, interacting” business realities vs. primitive Republicans whose blinkered, profit agenda stops at our borders. Recall John McCain’s utter economic illiteracy, and imagine Sarah Palin overseeing the Federal Reserve chairman or G-8 finance summits. Like Obama any better now?

The GOP, on a Train Looking Backwards

What the last months dramatize is how wedded are reactionary Republicans to outmoded, self-defeating “frames:” government is the enemy, greed and business are good, and there’s only one hammer for every problem: lower taxes and cut regulations. Jensen’s sermon puts the lie not only to the delusions about self-reliant nations, but related deceptions: that self-made, “rugged individualists” conquer the world by themselves, like isolated dragon-killers. No business invented the Internet, the spawn for billionaires. What about invisible, “foreign” elites that formulate what we eat and wear, how new are our cars or spacious our houses, all keyed to the “price of money” (read: interest rates), over which the lone cowboy has zero control? While Obama is missing his big chance for structural economic reform, inviting the next crash, he gets the complex variables at work, rejecting one-note panaceas from GOP midgets as uncaring as they are ignorant.

We all suffer from hardening of the categories, dragging around feel-good daguerreotypes that serve our biases. So, can we imagine Obama’s restraint gives opponents enough rope to hang themselves, allowing diehards to over-react and display to all how racist, self-absorbed, and medieval they are? I question if Republicans in lockstep with Teabaggers, Birthers, Truthers, Deathers, Tenthers, and Irate, Inveterate Shouters garner independents by 2010. Yes, a few scores and noisy brouhaha have damaged Obama, but his popular rebound after last week’s speech indicates the discontented didn’t lurch rightward, just moved apart.

Staring Down the Infidels

There is a Gandhi quality to Obama, an evolved self that offers grace, mercy, and forbearance when accosted with arrogant boors. What a compelling contrast between Obama’s Christian restraint vs. unholy zealots who cynically, uncharitably exploit religious terms and dogma, only to brag off camera how often they get away with wickedness. The leader who can graciously “stand and wait” embarrasses the tantrum throwers.

As with the school speech flap or calling Obama a liar, there are real, if hard to measure payoffs when the right goes off the deep end (about every week). Bad form doesn’t drive out good in every debate, and the Republican Party now deserves the old joke about South Carolina, “too small for a republic and too large for a lunatic asylum!” What favors Obama are fulsome fulminations from the lunatic fringe, so let’s hope those “makin’ it up” keep shoveling the manure. Let us recognize that measured optimism, even competence, from a sane White House that resides in our recognizable universe, are together antidotes both to the darkness of the last eight years and the rightwing terrorists who pal around with each other, geared for disruption, not resolution.