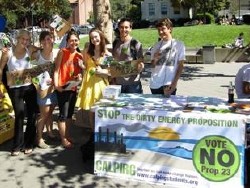 A new poll finds young voters, many of whom cast their first votes for Barack Obama in 2008, are among the least enthusiastic of any constituency about voting in November. Considering that record high student turnout in November 2008 was key to many Democratic victories, Organizing for America and other groups are prioritizing campus outreach (which is why President Obama held a rally at the University of Wisconsin at Madison this week). The most ambitious student voter drive is likely in California where the grassroots activists at CALPIRG, Environment California and the Energy Action Coalition are running a joint campaign. Using students’ strong opposition to Prop 23 (the Koch brothers funded measure that overturns California’s landmark anti- global warming law) for motivation, the coalition expects to have face-to-face interactions with 400,000 voters, collect 160,000 signed No on Prop. 23 pledges, and ultimately g0t 25,000-40,000 students to vote “No on 23” who otherwise would not have cast ballots.

As activists press to build enthusiasm among the Democratic Party base, the campus-based PIRGS are moving to duplicate their great success getting students to the polls in 2008. In California, campus activists are seeking to rally students to help defeat Prop 23, and the joint campaign of three groups with strong track records of success expects to mobilize over 2,000 student volunteers.

According to CALPIRG State Director Emily Rusch, the coalition has already reached 43,624 youth voters through face-to-face interactions, generated 23,056 signed no on 23 pledge cards and have recruited 680 volunteers.

Meanwhile, Environment California is conducting daily citizen outreach efforts on Prop 23. It has six offices around the state (San Diego, two in Los Angeles, Berkeley, Santa Cruz, Sacramento and San Francisco), as well as a telephone outreach project calling its members about Prop 23. This has already resulted in face-to-face interactions with over 16,000 California voters statewide, and phone conversations with over 4,000 voters about the “No on 23” campaign.

In Berkeley in the 1970’s, progressive activists felt that students might not be sufficiently motivated by political candidates and so put initiatives to legalize marijuana on the local ballot. The assumption was that once students got to the polls, they would vote for the entire progressive slate.

On California campuses in 2010, global warming has replaced legalized drugs as the hot button, voter turnout issue. If traditional patterns hold true, progressives in all races will benefit from the No on 23 campaign, which could also boost voter turnout among young people who are not students.

Focus on Prop 23 could also hurt Meg Whitman’s chances, as her support for a one-year moratorium on the measure Prop 23 seeks to repeal (AB 32) is unlikely to be popular with environmentally conscious voters.