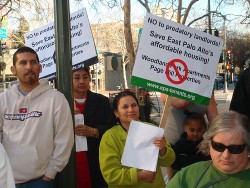 After gobbling up half the rental housing stock of East Palo Alto and aggressively raising rents, Page Mill Properties has invoked the controversial Ellis Act to evict tenants in the small city of East Palo Alto. Page Mill has targeted buildings with outspoken local activists, prompting accusations that the evictions are retaliatory.

Those familiar with the Ellis Act were not surprised to see it used in this way. “This is how the Ellis Act is used — it’s a horrible law that needs to be repealed,” said Ted Gullicksen, director of the San Francisco Tenants Union.

Originally justified as a way for small landlords to get out of the rental business, the Ellis Act has become a favorite tool of real estate speculators to turn a quick profit by buying rent controlled housing, evicting all tenants and reselling the units.

Tenant advocates and EPA officials have been urging CalPERS to intervene since last year. According to Dean Preston, Executive Director of Tenants Together, California’s statewide organization for renters’ rights, “CalPERS hasn’t done a thing to protect these tenants, some of whom are CalPERS members. CalPERS should start protecting the public employees of California, rather than just financing their eviction.”

In the last few years, Page Mill has acquired over 1700 rental units in East Palo Alto. The company immediately began imposing huge rent increases and evicting tenants at unprecedented rates. The company has repeatedly sued the city over local laws protecting tenants and filed unsuccessful petitions to raise rents. The company also tried to exploit a “mom-and-pop” exemption for small landlords from the local rent law, a claim that is the subject of a class action filed by tenants.

Many tenants in East Palo Alto have stood up to Page Mill. Page Mill likely invoked the Ellis Act this month because its attempts to push tenants out of their homes through other means have not been entirely successful. Tenants have successfully challenged some of Page Mill’s eviction attempts, as well as many invalid rent increases.

“This is a battle for the soul of our city,” remarked Chris Lund of the East Palo Alto Fair Rent Coalition. “We will not simply stand by quietly while this CalPERS-funded speculator ruins the lives of the residents of East Palo Alto.”