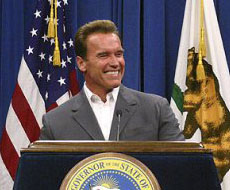 Earlier this month, Governor Schwarzenegger vowed he wouldn’t sign any legislation before a budget was passed, an obvious attempt to blackmail Democrats into hurrying along the process and accepting a Republican-driven result. Since then, mainstream coverage of the budget battle consistently includes hand-wringing over the looming deadline – this Saturday – for placing or altering measures on November’s ballot. This sort of coverage goes on to cite all the ‘major’ initiatives that wouldn’t go before voters due to the current logjam. Yet of the four big initiatives that must meet Saturday’s deadline to move forward, none are essential to a progressive Democratic agenda, and all were initiated at least in part by Schwarzenegger himself. State legislators should let the deadline pass … and let the Governor eat crow.

There’s no doubt that vital legislation remains trapped due to the Governor’s freeze on signing bills. A variety of important health care initiatives, for example, would benefit immediately from the budget passing. Landmark bills involving farm worker protections and electoral reform are also winding their way through the process, and deserve immediate attention by the Executive once they’re ready.

However, when it comes to items that must be approved by Saturday in order to go before voters, the ‘Big Four’ shouldn’t make progressives lose any sleep. They include:

Water: The Governor and Senator Dianne Feinstein want voters to okay a $9.3 billion water bond, which would go towards a slew of major infrastructure improvements. For starters, the bill remains woefully inadequate in terms of utilizing simple, cheap and effective strategies like water conservation, efficiency and recycling, which has earned it the ire of many major environmental groups. But even more important, Democrats have not had ample time to develop a counter proposal. There’s no question California faces severe challenges concerning its water supply, but at this point waiting a year for a good proposal is far preferable to rushing a bad one.

Lottery: Back in May, the Governor proposed borrowing $15 billion from state lottery income over the next three years. While Democrats continue to seek legitimate and progressive sources of new revenue to ensure a sustainable budget, Schwarzenegger continues to push this one-time fix with dubious certainty of success. Assembly Speaker Karen Bass hit the nail on the head when she called it “a Rubik’s Cube budget, not a long-term, structurally balanced budget.”

Not only that, but it would give more flexibility to the state lottery to grow its operation. This would come in the face of a recent California Budget Project report citing studies that show “individuals with lower incomes spend more on lottery tickets per capita than those with higher incomes,” and that “lottery sales are higher for individuals who have little or no formal education, are residents of urban areas, are between the ages of 45 and 65, and are not white.” Essentially, it’s a proposal to borrow our future on the backs of those least able to afford it.

Spending Cap: Creating a state spending cap has been a state Republican priority for years, and while it’s sold as a fiscally responsible move to the average voter, it’s a thinly guised attempt to annihilate public services. While some Democrats have toyed with the idea of agreeing to a cap in order to satisfy state Republicans and pass a budget, progressives have rightly stood firm against the idea, and should continue to do so.

High Speed Rail: Of the four, changes to the high-speed rail measure represent the only thing that might be an unfortunate casualty. The initiative would allow development of the rail line along its entire proposed route, rather than just between San Francisco and Los Angeles. It would also create more oversight to ensure the bonds get spent efficiently.

However, the measure continues to poll above 60 percent as it is, and changes to it could cause confusion on the ballot by creating a ‘Prop 1A,’ or even a new ‘Prop 12,’ instead of a the existing and simple ‘Prop 1.’ In addition, building the first leg of the route first could generate immediate public support for high speed rail, potentially making it easier to build the extensions to Sacramento and San Diego later on. Ultimately, the benefits aren’t significant enough to fight for it, particularly considering they were all Schwarzenegger’s ideas in the first place.

Given the nature of these measures, why would Democrats lift a finger to ensure they make it to the ballot? More specifically, why would they rush to pass a budget by continuing to negotiate with a Republican legislature with no intentions of compromising, simply to further a conservative agenda?

Instead, state Democrats should be working to ensure the measures don’t make it on the ballot. For starters, it robs Republicans of the ability to achieve some major policy goals. It also robs the Governor of the spotlight this election season should his water bond and budget-related proposals make it on the ballot.

Even better, it lays the responsibility for the measures failing to make it to the ballot directly on the Governor’s doorstep. It was him and him alone that dreamed up the ban on not signing legislation until a budget is passed. That he didn’t stop to think that the first casualties might be his pet projects is no one’s fault but his own. Even worse for Schwarzenegger, it’s becoming increasingly clear that it’s not the Democrats holding up the budget process, but blindly anti-tax members of his own party – politicians who continue to refuse to even offer a budget proposal of their own.

There’s no question Republicans will try and blame ‘obstructionist Democrats’ from preventing these measures from reaching voters. But the fact will remain that the entire debacle represents some serious egg on the Governor’s face. Rather than letting the deadline come and go quietly, Democrats should be relentless in pointing this out.