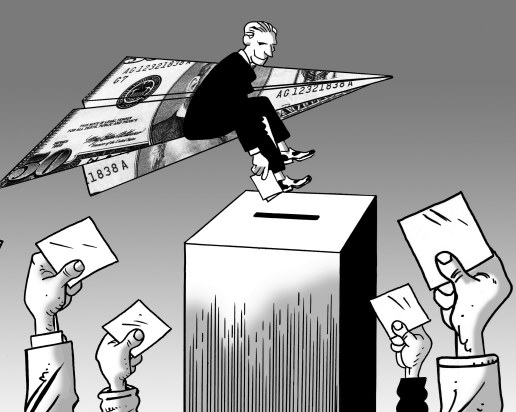 A record-low percentage of Californians bothered to cast ballots last November, and there is no shortage of explanations being offered. Everything from voter apathy to sophisticated micro-targeting by political campaigns has been cited as the reason for the abysmal 42 percent turnout among registered voters.

This is an encore posting from our State of Inequality series

But a new analysis of voting statistics and economic data suggests that California’s surging poverty and inequality rates are also partially to blame for the poor turnout.

“As home prices soar throughout the state and the middle class shrinks, we are increasingly creating a democracy where a growing number of people on the lower rungs of the socio-economic ladder are not participating,” says Mike Madrid, president of GrassrootsLab and author of a forthcoming study on poverty and voter turnout. “The result is a political system that increasingly ignores the political needs of poor people.”

Socioeconomic status has long been a good predictor of voter-participation, Madrid adds. Wealthy Americans vote at much higher rates than those of lower socio-economic status. During the 2008 presidential election, only 41 percent of eligible voters making less than $15,000 a year voted, compared to 78 percent of those making $150,000 a year or more.

“Poorer people by and large vote in smaller numbers than more affluent people,” he says. “It is no accident that turnout has decreased as our underclass grows.”

The record-low participation comes as California’s poverty rate is surging. About 24 percent of the state’s 38 million residents live in poverty, according to the latest U.S. Census Bureau report.

Poverty is not a perfect measure of likely voter turnout. Parts of the Central Valley, for example, have higher poverty rates than Los Angeles and higher voter turnout.

“Nonvoters surveyed who are renters were more likely to say they are too busy with work,” found a study from the California Voter Foundation. But home ownership doesn’t tell the entire story, either. Ownership rates are higher in the Valley than they are in the Bay Area, even though Bay Area participation rates, and income levels, are higher.

The Central Valley is also the heart of Purple California, where more competitive races and cheaper media markets lead to more voter contact in down-ticket races. But in many ways, the region is a different animal than Los Angeles and San Francisco — the two urban centers and economic engines of the California economy.

What else is contributing to the decline?

Some voter-participation advocates, such as Kim Alexander, president of the California Voter Foundation, say more sophisticated micro-targeting of voters by political campaigns is also part of the problem. Data companies offer likely “turnout universes” and give campaigns the ability to speak to a refined universe of likely voters.

But even the most sophisticated analysis boils down to a basic fact — economic status is one of the major determinants of a person’s propensity to vote.

“You can do 85 percent of voter targeting by age and home ownership,” says Paul Mitchell, vice president of Political Data Inc., which provides data and turnout models to hundreds of political campaigns. “If you were to create a universe of older homeowners and line that up to the most sophisticated voter-targeting universe, they’d look remarkably similar.”

But overlaying those facts with the current trends in the state’s economy paints a bleak picture, says Madrid.

It is a problem that is vexing to California’s elected officials. Assemblywoman Lorena Gonzalez (D-San Diego) said she will try to address some of the problems through the legislative process this year. Secretary of State Alex Padilla said boosting turnout is also a priority for his new administration.

“We have our work cut out for us to get more people to cast ballots,” said Padilla in an interview. “[Last] year’s turnout rates were very disappointing.”

Padilla says his office will be focused on encouraging more voters to register as permanent absentees, particularly in places like Los Angeles, which traditionally has been behind other counties in registering permanent mail voters.

As a state senator, Padilla authored legislation that allows people to register when they come into contact with government services. Citizens who receive health care through Covered California or receive food stamp benefits now have the ability to register when they enroll in those programs.

Others are already trying to target voters dismissed by most campaigns as low-propensity voters. Tom K. Wong, a political science professor at the University of California, San Diego, says groups had success in targeting those voters this past cycle, and may have even helped Democrat Scott Peters best Republican Carl DeMaio in a contested San Diego congressional race.

Wong says he is researching ways to target so-called unlikely voters — and having some success. Many of those voters cast provisional ballots. While DeMaio led among the ballots counted on Election Day, it was the provisional ballots that put Peters over the top.

Political campaigns generally discount low-propensity voters, arguing it is too expensive to target them. But Wong and his partners in a grassroots organization called Alliance San Diego developed a way to micro-target subgroups of voters that they say were painted with too broad a brush by traditional voter-data analysis.

“The unfortunate byproduct of this sophisticated, data-driven campaigning is that communities of color and those with lower incomes tend to be ignored,” he said.

In his research, Wong found that foreign-born Latinos, for example, were more likely to vote than native-born citizens in the same socioeconomic bracket. Getting a better understanding of who, specifically, is not voting and why is the key to increasing engagement, and worthy of investment from political campaigns.

“Our democracy is better when all people participate or have the opportunity to participate,” said Wong. “When campaigns and candidates ignore entire swaths of the electorate, our democracy is not functioning as well as it could be.”