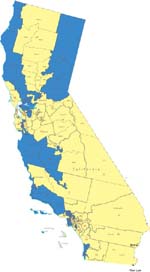 Ultimately, the race for the Democratic presidential nomination is a fight for delegates. Both campaigns admit this, and both expect the race to go all the way to the National Convention. And while we don’t know what will happen tonight, it’s fair to predict that Hillary Clinton and Barack Obama will receive an equal number of California delegates. That’s because most of our Congressional Districts have an even number of delegates – so unless one candidate blows the other one out of the water in a few districts, we’re likely to have stalemate in the statewide total. But that’s not the case in New York (Clinton’s home turf) – where 23 out of 29 Congressional Districts have an odd number of delegates, which enables a clear mandate for the majority winner. And considering Clinton’s edge among the so-called “superdelegates,” the nomination fight is likely to go on for months – despite clear public momentum for Obama’s insurgent candidacy.

Under the Democratic National Committee rules, California gets 436 delegates. 114 are the so-called “super-delegates” – the state’s U.S. Senators, Democratic members of Congress, members of the DNC and other party leaders – who get to vote for whomever they want at the Convention. 81 delegates are allocated to each presidential candidate based on the statewide primary vote – so if Obama gets 46% of the vote statewide, he’ll get 37 of these delegates and Clinton gets the rest.

The remaining 241 delegates are apportioned by Congressional District – each district getting anywhere from 3-6 delegates, based upon how well John Kerry did in 2004. So Nancy Pelosi’s district in San Francisco gets six delegates because it’s solidly Democratic and has a high voter turnout, whereas heavily Republican districts – or low-turnout districts such as Xavier Becerra’s district in Los Angeles – only get four. Theoretically, how well a presidential candidate fares in each district affects how many delegates they will ultimately get.

But whether your Congressional District is apportioned an odd number of delegates or an even number affects how much your vote will count in today’s election. In Pelosi’s San Francisco district – where Clinton and Obama will be fighting over a share of six delegates – Obama must get at least 59% of the vote to win a fourth delegate. If he gets less than that, then they each get three – even if he beats Clinton by a 58-42 margin. In a district that only has four delegates, the “winning” candidate must get 63% of the popular vote to win the delegate count – an even tougher hurdle.

Even in San Francisco, it’s tough for progressives to get close to 60% of the vote when there’s a tough fight with a moderate establishment type. Obama could still win the City by carrying the eastern neighborhoods (thanks to the Bay Guardian endorsement and the City’s more progressive politicos), but still get the same number of delegates as Clinton.

Compare that with congressional districts that have an odd number of delegates, like Ellen Tauscher’s in Walnut Creek which has five. Assuming Clinton wins that suburban area, all she needs is a simple majority to get 3 of the district’s 5 delegates. While you only need 50%-plus-one to win the delegate count in “odd” districts, you need a super-majority (up to 63%) to win more delegates in “even” districts. Somehow, that doesn’t sound equitable.

Bob Mulholland of the California Democratic Party explained to me yesterday that the National Party sets the rules – and gives each state three different methods for complying. It’s not a grand conspiracy, he said, just a mathematical formula. I also don’t expect that anyone thought about how it was unfair – after all, we haven’t had such a close fight in 40 years.

And there doesn’t seem to be any method to the madness for why some parts of California matter more than others. When Iowa and Nevada held their caucus, the state parties put more weight on the rural counties – but that was done intentionally: they did not want presidential candidates to parachute into the major cities and ignore the rest of the state. Which is why despite Clinton winning the popular vote in Nevada, Obama’s wider appeal in the northern half of the state helped him win more delegates.

But there’s no real reason why Contra Costa County should be an easier place to grab delegates than San Francisco. Delegates were simply apportioned throughout the state by Democratic voter turnout, and some districts got luckier than others. For the fortunate few, a 50%-plus-one victory has a bigger impact than elsewhere.

In California, most districts (32 out of 53) will have an even number of delegates – which as Slate Magazine noted, makes some voters more equal than others. But that’s not the case in other Super Tuesday states – Georgia, Missouri, Arizona and Tennessee are all on rough parity between “odd” and “even” districts. And in New York, only six of the state’s 29 Congressional Districts have an even number of delegates.

That New York voters will have a greater impact in the delegate count is disquieting – given that Hillary Clinton has home-court advantage. It’s unclear why New York has so few districts that require a super-majority to win more delegates, but the practical effect is that Clinton can blunt Obama’s surge in the Empire State by retaining a healthy majority of the delegates. Obama can do well in New York City – but without an outright majority in these Congressional districts he will not benefit by keeping the delegate count to a stalemate.

Moreover, Clinton has another trick up her sleeve – the “super-delegate” math. Regardless of what happens in each state tomorrow, every Democratic Governor, U.S. Senator, member of Congress and member of the DNC get a delegate vote at the National Convention. As you can imagine, more of these establishment types support Clinton over Obama – and if they stick together could even potentially broker the nomination for her. And as blogger Chris Bowers has warned, the super-delegates may hold the margin of victory.

In a normal presidential primary cycle, none of these delegate machinations really matter – because the establishment candidate has racked up such an insurmountable lead that to argue it is futile. But this is not a normal year: Barack Obama has inspired the grassroots of the Democratic Party, and the establishment may be stuck using “fuzzy math” to retain the Clinton dynasty. We’ll get a clearer picture after tonight if they can get away with it.

EDITOR’S NOTE: In his spare time and outside of regular work hours, Paul Hogarth has been volunteering on the Obama campaign’s field operation in San Francisco.