California Tenants Have No Friends in Governor’s Race 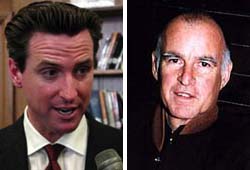 Last Friday at 5:00 p.m. (which he’s apt to do when releasing bad news), San Francisco Mayor Gavin Newsom vetoed three pro-tenant ordinances designed to help renters facing hard times. He even nixed a relatively mild proposal to limit “banked” rent increases to 8% – despite it being consistent with existing policies at the Mayor’s Office of Housing. Newsom’s record on tenant issues in San Francisco has always been bad, and his latest act does not bode well for next year’s statewide elections. California’s 14 million renters need a champion in the Governor’s Mansion after six years of a hostile Republican Administration, but Newsom currently only has one opponent for the Democratic primary – state Attorney General Jerry Brown. Based on his record as Mayor of Oakland, Brown can be counted on to be just as anti-tenant – if not worse – than Newsom. There is no excuse why a deep blue state like California can’t have a pro-tenant Governor, and the current field of Democratic candidates creates an opening for a new person to jump into the fray.

Sacramento Politics Out of Step With Renters

When Schwarzenegger became Governor in 2003, the tenants’ rights agenda in the State Captiol – which had made some progress in the Gray Davis years – came to a grinding halt. Arnold owns rental property in Santa Monica, and made it clear from the very start that he views California law as too “pro-tenant.” Besides the legislative victory of 60-day notices for “no-fault” evictions, renters have made virtually no progress in Sacramento ever since.

And it has been a nightmare. The Governor has vetoed legislation to help tenants in foreclosed properties, and single-handedly killed the renters’ tax credit. We can’t get the state legislature to pass desperately needed Ellis Act reform, because too many Democrats are afraid of angering realtors in their districts – if they know Schwarzenegger would not sign the bill into law anyway. We are at a standstill.

For a state whose voters soundly defeated Proposition 98 last year, there is no excuse why we can’t have a pro-tenant Governor. A wide coalition opposed Prop 98 (it was so extreme that even Pete Wilson and the Chamber of Commerce opposed it), but polling throughout the campaign repeatedly showed a majority of Californians support rent control – suggesting we should be making more progress.

Unfortunately, neither of the two Democratic candidates for Governor are pro-tenant.

San Francisco tenant activists know that throughout his career, Gavin Newsom has not been an ally. Newsom was a landlord when he served on the Board of Supervisors, and the City’s conflict-of-interest rules prevented him from taking a stand on many pro-tenant ballot measures. But his consultant, Eric Jaye, made his mark in June 1998 by running the unsuccessful campaign to pass Prop E – which would have repealed rent control and eviction protections for owner-occupied buildings with four units or less.

In 2001, Newsom was one of three Supervisors to vote “no” on Jake McGoldrick’s T.I.C. legislation – which was designed to curb Ellis Act evictions. In 2002, he signed the main ballot argument for Prop R – the measure that would have resulted in mass condominium conversions. The SF Tenants Union prioritized its defeat, and Prop R lost by 20 points.

As Mayor, Newsom has vetoed most pro-tenant measures. In 2004, he vetoed the Housing Preservation Ordinance – which stopped the mass demolition of rent-controlled properties. In 2006, he vetoed two measures designed to curb Ellis Act evictions: (a) one that would have allowed the Planning Commission to weigh in on such cases, and (b) one requiring real estate brokers to disclose a prior Ellis Act eviction to potential T.I.C. buyers at open houses. The voters passed the latter ordinance in the next election, a “veto override” that remains law today.

But Newsom has been willing to do the right thing – if it serves his political purposes. In 2006, he signed into law a measure that effectively halted condo conversions on buildings with a prior Ellis eviction. He also let an ordinance preventing landlords from arbitrarily taking away services become law. Newsom did this because: (a) tenant activists effectively publicized an eviction epidemic and (b) Supervisor Bevan Dufty – who had been the fourth vote to sustain the Mayor’s vetoes – was up for re-election, and he hoped to deter a serious challenger.

What does this prove? Newsom may not be “pro-tenant” – but if renters organize to shift the political dynamics, they can occasionally push him to respond. A Governor Newsom would probably not advance legislation to curtail the Ellis Act or strengthen rent control, but by working with friendly Democratic legislators tenants could score the rare victory.

It’s instructive to see what occurred in San Francisco after tenant issues died down in prominence. Besides vetoing the “renters’ relief” package, Newsom is pushing a very dangerous idea to fast-track thousands of condo conversion applications. Billed as a way to “raise revenue” for the City’s coffers, the measure would encourage more Ellis Act evictions down the road – and cannibalize our rental housing stock. Newsom even ditched recent City budget talks to meet at Medjool’s with the pro-gentrification group Plan C to discuss this proposal.

Newsom opposed Proposition 98. At the time, he said it would “effectively gut local land use planning and severely weaken environmental protections,” and a “disaster for cities and counties.” But now, his gubernatorial campaign has taken $25,000 from Thomas Coates – a real estate investor who gave one million dollars to the Prop 98 effort. Expect landlords and realtors to heavily fund Newsom’s gubernatorial campaign.

Progressives who remember when Jerry Brown was Governor – from 1974 to 1982 – are inclined to believe he would be pro-tenant, and thus better than Gavin Newsom. And it’s true that in 1976, he vetoed AB 3788 – which would have pre-empted rent control in California. (Other states were not so lucky, where the legislatures have forbidden cities from doing so.) But Brown waited until the very last minute to veto the legislation, and it was a very tough call what he’d do – he opposed blanket preemption of local governments, but was against rent control.

Brown is notorious for being quirky and unpredictable, and his politics have drastically changed over a very long career. Therefore, it’s not very helpful to look at his career as Governor in the 1970’s and 80’s. A more accurate prediction is to see where he’s been since 1998 – when he made a political comeback by getting elected Mayor of Oakland.

If Gavin Newsom has been a bad Mayor for tenants, Jerry Brown was a real nightmare. Oakland had rent control, but no “just cause” protections – which meant a landlord could simply ask a tenant to leave in thirty days for no reason at all. In the late 1990’s, as the dot-com boom gentrified Oakland (and Brown promoted massive downtown real estate development), tenants pushed for a “just cause” ordinance. When the measure qualified for the 2002 ballot, Brown vehemently opposed it – but the voters passed it, after a tough campaign. In 2004, Brown campaigned against pro-tenant Councilwoman Nancy Nadel.

During the mass real estate boom of the Brown years, Oakland had no inclusionary housing ordinance – which meant that private developers were not required to build any “below-market rate” units. Brown resisted any efforts to impose modest requirements, and his final act as Mayor in 2006 was to veto an inclusionary ordinance. In contrast, San Francisco passed an inclusionary ordinance in 2001 – which over the years has been strengthened to have higher affordability levels. Supervisor Gavin Newsom voted for it.

As Oakland Mayor, Brown was an unapologetic cheerleader of condo conversions – even if it displaced tenants. In November 2006, City Councilman Ignacio De La Fuente – who had been Brown’s endorsed candidate for Mayor to replace him that year – proposed such legislation, and attempted to pass it in a hurry while Brown was still in office. This effort, however was thwarted by Mayor-elect Ron Dellums. Brown’s position is disturbing, given that real estate speculators are taking the fight to Sacramento. Would a Governor Brown sign state legislation that preempts cities from passing restrictions on condominium conversions?

As far as I can tell, Jerry Brown never took a stand on last year’s Proposition 98 to ban rent control – even though practically everyone else opposed it. It cannot be because Brown was California Attorney General – since that didn’t stop him from opposing other propositions. But Brown used his position as Attorney General to write the measure’s official ballot title, and opted not to mention that Prop 98 would abolish rent control in California. A couple tenant groups sued him for an abuse of discretion, but a judge refused to require Brown to re-write it.

Can a “Pro-Tenant” Democrat Win the Governor’s Race?

Gray Davis was not exactly a “pro-tenant” Democrat, but as Governor he signed bills that the state legislature passed – such as (a) one-year Ellis eviction notices for seniors and the disabled, (b) strict habitability standards, (c) restrictions on re-renting property that had been Ellised, (d) exempting residential hotels (SRO’s) from the Ellis Act, and (e) 60-day notices for “no-fault” evictions. The latter law expired in 2005, and it took two attempts by tenant advocates in the Schwarzenegger years to successfully have it re-instated as permanent.

It is questionable if Governors Gavin Newsom or Jerry Brown would sign such bills into law. As for Brown, there is an added danger that he could even enact laws that would be a step backwards for tenants. But there are “pro-tenant” Democrats in California who could get elected Governor – if they bothered to run. Antonio Villaraigosa bowed out of the race, which is unfortunate – given his track record as Los Angeles Mayor at enacting some good legislation. Time is running out on politicians to enter the Governor’s race. Will anyone else jump in??

EDITOR’S NOTE: Paul Hogarth was an elected Commissioner on the Berkeley Rent Stabilization Board from 2000 to 2004, and has been a tenant activist for years. He is now a tenants’ rights attorney living in San Francisco.