California Rising: The Life and Times of Pat Brown 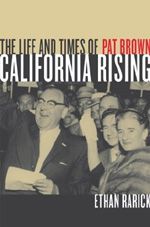 Pat Brown has in many ways become an anachronism. The glad-handing politician rose to prominence in the 1950s in large part due to his ability to connect face-to-face with voters, an ability that would prove no match for the television-friendly Ronald Reagan in ’66. But Brown’s political style is not the only dated aspect of his career. He fought for causes quite liberal even by today’s standards in an era when California’s political center sat farther to the left. And he was the last prominent Democrat to preside over the state before the turbulent 1960s radically altered California’s political landscape, triggering a conservative backlash that spread nation-wide.

Brown grew up in San Francisco, the son of a gambling father and Catholic mother. After an adolescence spent working for his dad in a series of failed business ventures, including running numbers, Brown entered a local law school that didn’t require a Bachelor’s for admittance. He graduated and began a relatively successful law practice.

A political man at heart, it didn’t take Brown long to throw his hat in the ring, and after a failed attempt for state assembly, Brown won a spot as District Attorney. From there he moved to state office as Attorney General, and after two relatively uneventful terms, staged a successful campaign for Governor.

Upon entering office, Brown declared an ambitious agenda for the state that reveals much about the political climate in the 50s as compared to today. Brown announced that he wanted to ban racial discrimination in hiring, expand publicly funded medical care for the poor, establish a minimum wage, improve campaign finance reporting, offer treatment to drug addicts convicted of crimes, improve public schools, and research the dangers of smog, amongst a host of other liberal causes.

Back then, ‘liberal’ wasn’t a bad word, and Brown had focused his campaign message on highlighting his strong leftist credentials. In fact, current Democrats would do well to take up some of the issues Brown raised so long ago, particularly concerning Brown’s emphasis on rehabilitation of criminals rather than locking them up longer.

Brown also took up an issue long abandoned by Democrats – the death penalty. Rarick devotes large amounts of text to Brown’s bumbling of the Caryl Chessman execution, but more important is that Brown spent his entire second term commuting every death sentence that came before him due to a profound moral opposition to the practice.

Brown achieved a great deal in his first few years, presiding over the creation of the Master Plan for Higher Education, implementing more progressive forms of taxation, and working to ensure funding for state-wide social programs. One accomplishment of Brown’s, highlighted then as a product of his liberalism, will likely raise the eyebrows of many modern-day readers — his building of dams and aqueducts throughout California. Before the environmentalist movement began in California, damns represented cheap power for the working man and aqueducts represented cheap water for the small farmer. Brown considered himself a proponent of both these constituencies.

This type of infrastructure-building became a trademark of Brown’s administration. Brown oversaw a massive population boom in the state, and worked to secure the public funding necessary to build the highway systems, universities, and waterways to accommodate the onslaught. Brown thought big, and Californians benefited immensely.

Perhaps the most controversial of Brown’s accomplishments was his support of the Rumford Act, which sought to eliminate racial discrimination in the selling and renting of housing. After a hard-fought win in the legislature, opponents of the Act quickly organized to put the now notorious Proposition 14 on the ballot.

Prop. 14 won in 1964, negating any effect the Rumford Act would have had and setting the stage for a conservative resurgence that would soon rage through the state. Every county in California except for two voted for Prop. 14. Remarkably, every Bay Area county, including San Francisco, voted this blatantly racist ballot measure.

Rarick’s book deals with the first seven years in a rollicking style that often errs towards the general instead of the specific. Most attention is paid to various political personalities and battles in Sacramento, the stuff of interest to political aficionados rather than the average reader. The common criticism of many historical works as tales of Great White Men could easily be leveled at “California Rising’s” first 250 pages.

However, all this changes completely when Rarick reaches the end of Brown’s second term. The book begins focusing on the minute details of both the Berkeley Free Speech Movement and the Watts Riots, events that split California in two.

Brown is left fumbling during both situations. Not used to dramatic displays of civil disobedience or riots, he strives for a middle ground between a police state and a recognition of the protesters demands. Ultimately, he pleases no one, and sets himself up perfectly as the fall-guy for the conservative backlash that would ultimately put him out of office.

Brown was a unifier, someone who was often personally quite liberal, but worked hard to maintain support from conservatives, both Democrat and Republican. The 60s destroyed that unity he had created. People on the left believed he came down too hard on the college kids, people on the right not hard enough.

As for Watts, many of those who had supported Proposition 14 revealed a distinct, though not necessarily open, racism. These beliefs blossomed with the riots, as images from the Los Angeles streets struck fear in the hearts of white Californians. They believed Brown did not act quickly or decisively enough against the rioters, further cementing their opposition to him.

To Rarick, these events destroyed the previous image of California as a sunshine state of dreams, instead marking it as a bell-weather for the conflict that would soon spread throughout the country. As the fight for social justice during the 60s began in California, so did the reaction to it, with Ronald Reagan ousting Brown from the governorship in 1966.

Certainly the 60s can not entirely account for Brown’s demise. While he accomplished much simply by being likable, Brown ate up attention, and constantly required assurance that he was liked. The California governor would often vacillate at key moments – the evening of a high-profile state execution, for example – because he would talk to many people and follow each one’s advice in succession in the hopes of currying their favor.

Rarick also points out Brown’s failure as a party leader, flubbing his roles as leader of the California contingent of Democrats to the National Democratic conventions during his terms as governor. Brown proved unwilling to exercise the steely resolve and employ the harsh threats of political retribution necessary to keep an often divided party in line.

Rarick writes well, keeping the reader engaged throughout “California Rising.” However, it’s obvious his passion lies in the events of the 60s rather than the rest of Brown’s administration. The prose is livelier, the events dealt with more extensively, and Brown becomes a much more human character.

Perhaps the greatest critique of “California Rising” is Rarick’s inability to provide a distinct, in-depth picture of Brown as a person. The best political biographies document both the subject’s political strategies and accomplishments as well as the personal convictions, dreams and emotions that drove them to get into politics in the first place. One finishes Rarick’s book with an excellent understanding of Brown as politician, but little else.

Ultimately, Brown will likely be remembered as California’s last great Democrat before the 60s fractured the party, sparking a nation-wide Republican resurgence. Progressives may look back with pride at many Brown’s past accomplishments. But to look towards Brown for direction in the future will likely prove unfruitful, for he truly is an anachronism, a man from a different time.