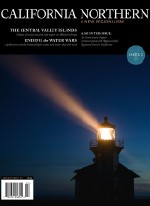 Join a group of independent writers, poets, and photographers (including former BeyondChron.org Managing Editor Casey Mills) for a celebration of the release of Issue 2 of California Northern Magazine. The event will begin at 7:00 p.m. this Thursday, January 27th, at Diesel bookstore in Oakland. The program includes readings from poet Jesse Nathan and editors Paul Barrett and Richard Mills, a presentation of photography appearing in the issue, and a discussion with the magazine’s founders.

California Northern Magazine is a biannual publication exploring the region’s cultures, environments, histories, and identities. It provides a rare California-based forum for exceptional essays, long-form journalism, literature, and photography, and distinguishes itself from traditional regional media by balancing its local emphasis with a level of sophistication and depth typically found in larger national publications.

The second issue features articles on the environmental threats of the upcoming water bond; charges made by isolated communities in the Central Valley of racial discrimination at the hands of their government; and an exploration of the debate about where the border between northern and southern California truly lies. Also included is an in-depth interview with Wanderlust author Rebecca Solnit and a look at writer Raymond Carver’s connections to Northern California.