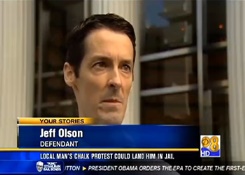 No, I’m not making this up.

Jeff Olson, the 40-year-old man who is being prosecuted for scrawling anti-megabank messages on sidewalks in water-soluble chalk last year now faces a 13-year jail sentence. A judge has barred his attorney from mentioning freedom of speech during trial.

According to the San Diego Reader, which reported on Tuesday that a judge had opted to prevent Olson’s attorney from “mentioning the First Amendment, free speech, free expression, public forum, expressive conduct, or political speech during the trial,” Olson must now stand trial for on 13 counts of vandalism.

In addition to possibly spending years in jail, Olson will also be held liable for fines of up to $13,000 over the anti-big-bank slogans that were left using washable children’s chalk on a sidewalk outside of three San Diego, California branches of Bank of America, the massive conglomerate that received $45 billion in interest-free loans from the US government in 2008-2009 in a bid to keep it solvent after bad bets went south.

The Reader reports that Olson’s hearing had gone as poorly as his attorney might have expected, with Judge Howard Shore, who is presiding over the case, granting Deputy City Attorney Paige Hazard’s motion to prohibit attorney Tom Tosdal from mentioning the United States’ fundamental First Amendment rights.

Oh, and, yeah, the defendant’s attorney is not allowed to talk about that pesky free-speech-first-amendment thing during the trial. Seriously.

Upon exiting the courtroom Olson seemed to be in disbelief.

Tosdal, who exited the courtroom shortly after his client, seemed equally bewildered.

“I’ve never heard that before, that a court can prohibit an argument of First Amendment rights,” said Tosdal.

Yeah, this is beyond insane. Apparently, Darell Freeman, Bank of America’s Vice President for Global Corporate Security (imagine the power trip issues this guy probably has with that kind of douchey title) thinks that someone using pharmacy kiddie chalk to protest corporate greed is the same as, umm, running a business?! Or, perhaps, Freeman just didn’t like the fact that Olson wanted to warn consumers about Bank of America’s insane debit card fees.

On October 3, 2011, Olson first appeared outside of a Bank of America branch in San Diego, along with a homemade sign. Eight days later Olson and his partner, Stephen Daniels, during preparations for National Bank Transfer Day, the two were confronted by Darell Freeman, the Vice President of Bank of America’s Global Corporate Security.

A former police officer, Freeman accused Olson and Daniels of “running a business outside of the bank,” evidently in reference to the National Bank Transfer Day activities, which was a consumer activism initiative that sought to promote Americans to switch from commercial banks, like Bank of America, to not-for-profit credit unions.

At the time, Bank of America’s debit card fees were among one of the triggers that led Occupy Wall Street members to promote the transfer day.

“It was just an empty threat,” says Olson of Freeman’s accusations. “He was trying to scare me away. To be honest, it did at first. I even called my bank and they said he couldn’t do anything like that.”

Freedom-hating Freeman (ironic name, huh?) pressured the San Diego police — over and over and over again — to attack Olson’s chalk-based activism with the same legal force used to prosecute violent gang members. And, well, because this is America (America!), he got his way, it seems.

Over the course of the next six months Olson visited the Bank of America branch a few days per week, leaving behind scribbled slogans such as “Stop big banks” and “Stop Bank Blight.com.”

According to Olson, who spoke with local broadcaster KGTV, one Bank of America branch claimed it had cost $6,000 to clean up the chalk writing.

Public records obtained by the Reader show that Freeman continued to pressure members of San Diego’s Gang Unit on behalf of Bank of America until the matter was forwarded to the City Attorney’s office.

On April 15, Deputy City Attorney Paige Hazard contacted Freeman with a response on his persistent queries.

“I wanted to let you know that we will be filing 13 counts of vandalism as a result of the incidents you reported,” said Hazard.

Uh, and $6,000 to wash some chalk off a sidewalk?! Was it Bank of America CEO Brian T. Moynihan pissing pure gold water to wash off the protest slogans?

If you want to tell Bank of America what you think of their wasting our tax dollars to attack the First Amendment rights of a citizen, you can contact them here: