California is Still a Blue State 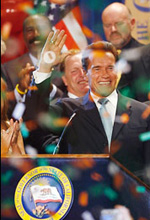 With Democrats taking back the House (and possibly the Senate) and talk of a “renewed” national Democratic Party, it was embarrassing for California – one of the most reliably blue states – to re-elect Governor Arnold Schwarzenegger by a 17-point margin. Expect the media, especially the Chronicle, to follow up in the next few days with puff pieces about how Arnold was able to buck the national trend. Republicans will no doubt renew their efforts to amend the constitution so that the Austrian-born actor can someday become President, and the media honeymoon with a Governor who last year threatened to “kick nurses’ butts” will unfortunately persist.

But Schwarzenegger’s victory was already a foregone conclusion that progressive activists had already conceded. With all the talk that an Arnold victory would give other statewide Republican candidates coattails and shift the political dynamics of California, last night’s election results don’t prove that this happened. And while the state propositions were a mixed bag, progressives have a lot to celebrate with the defeat of Propositions 85 and 90, the passage of Prop 1C, and Secretary of State Debra Bowen.

California’s Democratic Party is a moribund institution with the same old elected officials who are used to winning every time. This year, every statewide officer chose to play a transparent game of “musical chairs” as they jockeyed for higher office. The Insurance Commissioner (John Garamendi) ran for Lieutenant Governor, and the Lieutenant Governor (Cruz Bustamante) ran for Insurance Commissioner. The former Governor (Jerry Brown) ran for Attorney General, and the Attorney General (Bill Lockyer) ran for Treasurer. And, of course, the Treasurer (Phil Angelides) ran for Governor after winning a brutal primary with the Controller (Steve Westly) that has relegated both to private-citizen status.

Most won their respective races – largely due to name-recognition and the high number of Californians who vote the straight Democratic Party ticket. While the Angelides campaign certainly hurt the chances of down-ballot Democrats, voters were not about to elect a right-wing conservative like Tom McClintock to statewide office. Only Cruz Bustamante – who has his own share of troubles – lost his race.

While the “old boy network” of Democratic officials ran for the other statewide offices, State Senator Debra Bowen won her race for Secretary of State by 200,000 votes. A long-time champion for voting rights, Bowen’s victory over Republican incumbent Bruce McPherson was one of the most exciting things to happen last night. In the state legislature, Bowen wrote the law requiring electronic voting machines to have a paper trail – as well as the option for voters to register “permanent absentee.” While Republican voting machine companies try to rig election results, California will be lucky to have such an able overseer of our elections as Debra Bowen.

Easily the greatest news on the state ballot last night was the defeat of Proposition 90. The most deceptive, draconian and extremist measure on the ballot failed by about 300,000 votes, despite a slick campaign effort to “protect our homes.” Sponsored by Howie Rich, a New York libertarian real estate millionaire, Prop 90 would have changed the state constitution to redefine a “taking.” It would have made state and local government powerless to regulate private property because landlords and developers could sue for any “lost profits.” For example, it probably would have made San Francisco’s Proposition H unconstitutional.

Californians also rejected Proposition 85 – the Parental Notification Initiative that would have endangered the lives of many teenage girls. Given that voters rejected an almost identical initiative last November, it is disgusting that the religious right would place it on the ballot again just twelve months later.

There were some disappointments with the statewide propositions. Voters overwhelmingly approved Proposition 83, the so-called “Sex Offender Reform” law that will put an Orwellian tracking device on all former sex offenders – and prevent them from being within 500 feet of a park or a school. The practical effect of this law would be that thousands of San Franciscans would have to leave town, and it will cost the state an ungodly amount to enforce. Unfortunately, Prop 83’s outcome was never in doubt. Hopefully, it will be thrown out in court.

Nevertheless, progressives should generally be happy with the statewide results of last night’s elections. California is still a very blue state, and all indications show that it will remain that way. Now we’ll have to see if the Terminator will truly govern as a “moderate,” or it was all just a cynical act to get re-elected.