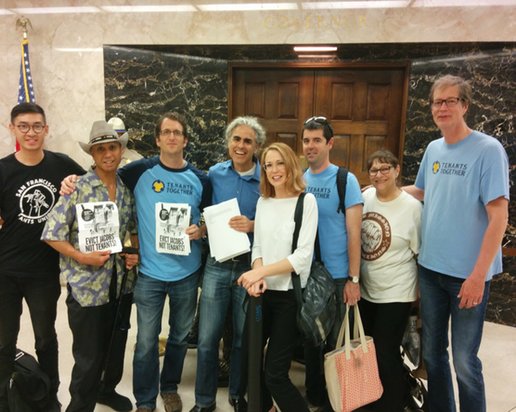 Tenants Together celebrates the victory

On July 14, the Chairman of the California Housing Finance Agency (CalHFA) announced his departure following a two-month campaign by tenant activists demanding his ouster. Matthew Jacobs, the head of a state affordable housing agency, was himself doing mass evictions of Los Angeles tenants using the state’s controversial Ellis Act. Tenants Together members rallied in Sacramento at the bi-monthly CalHFA meeting in the moments leading up to the announcement of Jacobs’ departure.

Tenants Together (TT) learned of Jacobs’ eviction activity from the Coalition for Economic Survival, a TT member organization in Los Angeles.  “This is a tremendous victory for tenants,” said Coalition for Economic Survival Executive Director Larry Gross. “There is no doubt that the overwhelming outcry from tenants and affordable housing advocate across the state put Jacobs in situation that left him no choice but to step down.”

Tenants Together organized tenants statewide to demand Jacobs’ removal. Tenants across the state called the governor and sent nearly a thousand letters demanding that governor remove Jacobs. Initially, CalHFA staff responded to media inquiries by claiming that Jacobs’ business dealings were unrelated to his work to support affordable housing at CalHFA. Tenants Together stepped up efforts to oust Jacobs given the agency’s inaction.

On Tuesday, tenants rallied at the CalHFA meeting in Sacramento, distributing flyers showing Matt Jacobs as a wrecking ball destroying affordable housing. Tenants provided powerful testimony inside the hearing room highlighting the horrors of Ellis Act eviction and the need for Jacobs to step down.  Among the tenants who attended the hearing was Steven Luftman, a Los Angeles tenant being evicted by Jacobs. Tenants Together members from across the state raised the funds within hours to cover Luftman’s travel costs so he would have the opportunity to confront Jacobs.

Patricia Kerman, a senior who successfully fought against Ellis Act eviction to stay in her San Francisco home, testified, “I came to Sacramento to support someone from L.A. because I’ve been through this struggle. I know what happens to people that are going through this. You can’t sleep. You can’t eat. You have panic attacks. You think you are having a heart attack.” Representatives of SF Tenants Union and Eviction Free SF testified as well.

Jacobs announced at the meeting that he would not seek reappointment when his term was up this September.

Tenant Steve Luftman welcomed the news as a good first step, but urged Jacobs “to do the right thing: to rescind the eviction notices and let me and my neighbors live here in peace.”  Larry Gross of CES shared that sentiment, noting “the decent thing for Jacobs to do now would be to rescind the evictions and allow his tenants to remain in their long-term rent controlled units that they have called home.”  Unless the evictions are withdrawn, tenant activists are planning to protest at Jacobs’ final CalHFA meeting in September in Burbank.