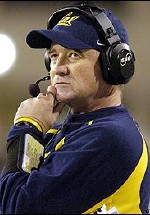 Last week, the UC Regents voted to raise student tuition by 8%. Many UC Berkeley students protested the hike, and some were arrested. But while Cal Berkeley students join the rest of their UC colleagues in paying more, the school’s football coach, Jeff Tedford, has a $2.5 million contract that makes him the highest paid state employee. Tedford earned $2,831,653.50 in 2007-08, and currently earns $2.3 million. He was given a contract extension at this exorbitant amount through 2015, despite not having taken Cal to a major bowl game in several years. While no state money is used for Tedford’s contract (it is paid by donations to the athletic department), it has no buyout provision; this means that Cal would have to use public funds — as much as $10 million — if they now fired him. The only hope for long suffering Cal football fans is that Tedford looks in the mirror, realize he’s taking advantage, and resigns.

I wrote on November 18, 2008 that Cal’s football program under coach Tedford was “going in reverse,” and that “Cal is further than ever from a Rose Bowl.”

It did not take the national embarrassments in back to back weeks of 1. Faking injuries against Oregon and 2. Suffering the most one-sided Big Game loss since 1930 to confirm my points. It has been clear for at least two years that Tedford’s best days are past and he has no ability to take Cal to the next level.

It’s no big news that the University of California has misguided spending priorities, but Cal’s athletic program deserves a special category. Here the school cuts five sports including baseball, and yet inexplicably makes a football coach with a mediocre record the highest paid state employee.

Did Cal fear that another school would steal Tedford away by paying him more? And what was the rush to extend his contract until 2015?

And his $2.3 million deal has no buyout clause!

I hope Tedford is sharing his money with Tom Holmoe, his failed predecessor. Many Cal alums have forgotten the team’s glory years under Mike White and Bruce Snyder, and see the school as either having a complete failure like Holmoe or a much better though mediocre Jeff Tedford.

Fear of another Holmoe keeps many alums in Tedford’s camp. And, to be perfectly honest, I thought of these folks sitting through the Stanford’s humiliation of Cal last Saturday and said to myself — maybe this will wake them up.

Face it, Tedford defenders. Our coach is unable to recruit or coach quarterbacks, is a weak recruiter, and had atypical success because star players like Marshawn Lynch and Jahvid Best wanted to go to school near where they grew up.

True, Tedford got DeSean Jackson out of Los Angeles. But that has proved the exception. Cal is no longer getting prime recruits, and now stands in the lower half of the Pacific 12 in its ability to secure top players.

Cal made the great decision to replace basketball coach Ben Braun with Mike Montgromery. It now must figure out some way to rid the football team of Tedford. Unfortunately, given the lack of any other teams anywhere willing to pay him $2.3 million a year, we could instead be looking at half-filled stadiums and losing seasons for years ahead.

Randy Shaw is the editor of Beyond Chron, and attended Cal during the great Chuck Muncie, Wesley Walker, Steve Bartowski and Joe Roth years.