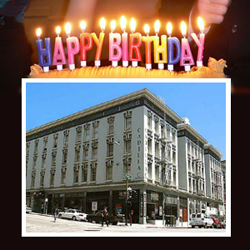 In 1985, the future of San Francisco’s Tenderloin neighborhood looked bright. The community won legislation protecting its residential hotels from demolitions and tourist conversions in 1981, and in 1985 the Board of Supervisors changed the community’s zoning from intensive high-rise commercial to strictly low-rise residential. A variety of economic development projects, including a Sizzler Restaurant, were on the horizon. The community had unified to reduce crime, and resident, business, and property owner involvement had never been greater. But the Tenderloin took a wrong turn after 1985, and two decades of stagnation followed. Today, the Tenderloin has been given an opportunity rare in the lives of people or neighborhoods to turn the clock back two decades and chart a new course. And as will become clear from the Cadillac Hotel 100th Birthday Party on September 19, in 2007 the community’s course will stay straight and the best interests of the people will prevail.

The best feature of Wednesday night’s (5-7pm) Cadillac Hotel Birthday Party is the opportunity it provides for people to learn about the Tenderloin’s past, and to understand the vision that Cadillac owners Leroy and Kathy Looper brought to the neighborhood in 1977. This vision has animated the Tenderloin for the past thirty years, and still sets its direction.

The Loopers believed that the Tenderloin’s large number of single-room occupancy hotels (SRO’s) becomes the neighborhood’s backbone. This was consistent with the historic uses of SRO’s, which had housed merchant seamen, truckers, and other blue-collar workers. But by the late 1970’s, SRO’s had lost most of their traditional senior and working-class population, and became increasingly known by the negative term of “flophouses.”

At the time the Loopers were seeking to revive SRO’s as a form of stable, long-term housing, New York City was demolishing tens of thousands of such units. And the San Francisco Redevelopment Agency was doing likewise in the South of Market.

This was an era when “the next new thing” was converting SRO’s into boutique tourist hotels, not improving them for the poor. But the Loopers did not let the surrounding destruction of SRO’s change or stop their dream. They figured that if they could transform the Cadillac into a model of what could be done, other hotels might follow.

We’ve all seen the bumper sticker quoting Margaret Mead as to the ability of a single person to make a difference in the world. In the Loopers’ case, this proved the case.

For several years after the Loopers’ 1977 takeover of the Cadillac, the building served as a symbol of a reviving community. And the Cadillac’s impact on attitudes toward SRO’s transcended the Tenderloin.

After Gordon Chin of the Chinatown Community Development Center saw the Cadillac’s success, he realized he could replicate this model in Chinatown and North Beach; the group’s acquisition of the Swiss American and Tower Hotels followed.

Once the Cadillac showed the value of preserving SRO’s, momentum built for a city law to stop the conversion or demolition of such units. With Chinatown activists now actively engaged in preserving SRO’s, they joined the Tenderloin in winning enactment of a critical hotel anti-conversion ordinance in 1981.

Leroy Looper was the key property owner supporter of the petition to rezone the Tenderloin into a residential neighborhood. Looper supported the downzoning of his property from a site that could allow a forty-story hotel or office building, to one that could only have an eight story residential building.

Looper’s support for the Tenderloin rezoning cost him at least $10 million. In the annals of San Francisco history, you will find few if any other owners willing to sacrifice such profits for the good of the community.

As I discuss in The Activist’s Handbook, the rest of San Francisco did not even view the Tenderloin as a neighborhood until a grassroots campaign to save the community was launched in 1980. By 1985, nobody questioned the Tenderloin’s future as a low-income residential neighborhood, and its future was seen as bright.

The original Hearst-owned San Francisco Examiner used to have an Image magazine as part of its Sunday paper. On November 1, 1987, the cover story announced “The Tenderloin Transformed,” and described the community as a “case study of urban renewal from the bottom up.”

But just as prosperity was not “around the corner” as backers of Herbert Hoover predicted in 1932, the Tenderloin’s fall happened quickly and without warning. A sharp decline in real estate (which led to the Savings & Loan collapse), rising urban crime, and federal funding cutbacks to inner cities suddenly changed the Tenderloin environment for the worse.

In addition, Mayor Feinstein’s “hotline hotel” program had transformed many Tenderloin SRO’s into shooting galleries with deplorable living conditions. The well-maintained Cadillac was becoming the exception for SRO’s, not a model.

The Cadillac’s prized Sizzler Restaurant was supposed to be a magnet drawing outsiders into the Tenderloin. But rising crime made this a life-threatening proposition, and the business eventually closed for lack of business (Street safety got so bad that Kathy Looper recalls telling Mayor Agnos that the only way customers would come is by helicopter.)

The Cadillac received a major upgrading in the early 1990’s, and ambitious plans for the Tenderloin were renewed, but it was SOMA and the Mission, not the Tenderloin that became developer targets during the 1990’s dot-com boom.

The Loopers continued to provide leadership, but other than Neveo Mosser, no new property owner came into the Tenderloin during the 1990’s to make a positive difference. The group of “best and brightest” young Tenderloin activists of the 1980’s were largely gone, and so was the paper’s once vital newspaper, the Tenderloin Times.

Also gone was the federal money that came into the Tenderloin from the resettlement of Southeast Asian immigrants following the end of the Vietnam War. The Tenderloin became a Vietnamese and Cambodian neighborhood almost overnight in the 1970’s and 80’s, but by the 1990’s young people raised in the community had moved on, leaving their younger siblings and older parents to walk fearfully on the community’s streets.

The Tenderloin was afflicted with absentee property ownership, a death knell for any community seeking to chart a new course. While the neighborhood’s nonprofits were expanding with additional city funds, the lack of landlord and business involvement in the community prevented the larger safety and economic development issues from being addressed.

In 2005, this latter problem was corrected with the creation of the North of Market Community Benefit District (NMCBD). The CBD not only brought key neighborhood stakeholders into community improvement efforts, but it brought NMCBD head Elaine Zamora into an important leadership role.

Today, the Tenderloin has an involved group of property owners and merchants, major resident involvement, construction is proceeding wherever one looks, and there is an optimism not seen in these parts for twenty years.

Join Mayor Gavin Newsom and learn the people’s history of the Tenderloin at the Cadillac at 380 Eddy Street on September 19 from 5-7pm, for a night that people will be talking about for years.