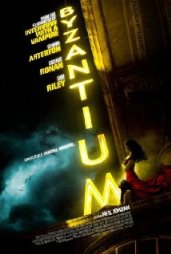 They were born 200 years ago — and they still are sucking blood out of their boyfriends neck. Well, you have to have some nourishment don’t you?

This story is ingeniously constructed and the cinema photography is absolutely stunning. There is a creepy mystery about this deserted Island. The Vampire Girls first plunge a long Thumbnail into their Toy Boys necks and they lead the men to a dark cave. Suddenly hundreds of dark birds flock around the person who just got their blood sucked out during this ritual. From the mountain top — a river of blood comes down to the Vampire Girls where they can enjoy all the blood they want. This is a ritual that you won’t ever forget.

Actually the appearance of blood was reduced for your enjoyment. This is not one of those “True Blood” kind of things. Nope, these are truly high class Vampire Girls. Men didn’t seem to get into it. Hey, how would they know what they are about to get into?

The film is directed by Neil Jordan and written by Moira Buffini (who also wrote the play that the film is adapted from.)

This film will not easily leave your mind. “It’s sexy, exhilarating and Lethal!” The movie itself is a thing of beauty, and very engrossing.