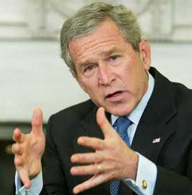 When is a national healthcare plan almost as bad as no healthcare plan at all? When it’s proposed as a desperate PR gesture by a president with the lowest public approval rating (35%) since Richard Nixon got caught knee deep in the Watergate mudslide.

President George W. Bush is knee deep in it himself, though it’s not mud that he’s stuck in. He unveiled his version of “health care reform” during his January 23 State of the Union address before the new Democratically-controlled Congress. As difficult as it is to imagine, his take on universal healthcare is even worse than his plan to send 20,000 additional troops to Iraq. Bush’s idea of “healthcare reform” is nothing short of a huge giveaway to corporate America. It’s a slap in the face to working-class people who can barely make it in an economy that has left them poorer than they’ve been in a long time.

The Bush proposal in a nutshell: Employees who are fortunate enough to have heath insurance would suddenly have to pay taxes on it. All those healthcare benefits packages that have been won through long years of struggle by the labor movement would be considered taxable income. Companies, too, would be taxed on the portion of those benefits that they pay for their workers. Those without health benefits would allegedly have an incentive for buying insurance: They’d get a tax credit every year.

Universal healthcare it ain’t. It’s hardly even “reform” of our healthcare system. It’s a windfall for health insurance providers. It’s a step backwards for American workers. It penalizes those who already have benefits. It gives their employers the most compelling reason to drop their insurance plans: profits. Why would any corporation want to continue providing insurance that costs big bucks to begin with and is taxable on top of it? Bush’s plan may ultimately result in American workers losing their benefits and then being forced to fend for themselves in the overpriced marketplace of health insurance.

As for those people who have no coverage at all, a tax break would not necessarily make healthcare affordable or feasible for them. Those barely making ends meet may not opt to take advantage of the tax break by buying expensive health insurance, when there are other priorities such as food and rent. The tax deduction may not cover the price tag on the insurance. And in the end, even if this plan worked, the playing field wouldn’t be level: some people would have great health insurance and many more would not. Only universal healthcare levels the playing field by giving everyone the same coverage.

The president’s “healthcare reform” is just more of what we’ve come to expect of a Chief Executive who the helped promulgate the myth that Iraq had weapons of mass destruction. Forget healthcare as a human right. In the Bush view of the world, it’s all about welfare to his corporate buddies.

Tommi Avicolli Mecca is a radical, southern Italian, working-class performer, writer and activist whose work can be seen at www.avicollimecca.com.