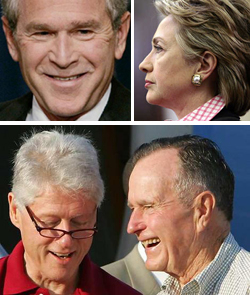 The Washington Post this weekend reported an off-the-record meeting that President Bush had at the White House with various pundits, where he predicted that Hillary Clinton will be the next President. Bush is shaping his legacy, said the Post, and is planning to make it feasible for his successor to keep us in Iraq. It’s a sharp contrast with Hillary’s support among Democratic voters, who think she’s more likely to get us out of Iraq and are more likely to view her as “liberal” than John Edwards or Barack Obama. But if you parse Hillary’s statements, she has left enough wiggle room for a Clinton Administration to stay in Iraq for a while. It is easy to dismiss Bush’s talk as delusional, but in recent years Hillary’s husband has developed a close personal friendship with the elder President George Bush as if 1992 never happened – suggesting a stronger tie between the two political families than one might imagine.

Last week, Bush invited top Beltway pundits – including ABC’s George Stephanopoulos – to the White House for a casual discussion. The media were told not to directly quote the President, but they could repeat what transpired in the talks. “Bush made no explicit election predictions,” reported the Post, “but clearly thought Clinton would win the Democratic nomination and talked in a way that seemed to suggest he expects her to succeed him – and will continue his Iraq policy if she does.”

That certainly flies in the face of how Democrats generally perceive Hillary Clinton – who has held a steady lead for the presidential nomination. Despite her initial support for the War, her refusal to apologize, and her late support for withdrawal, Democrats by a 2-1 margin think that she is more likely to get us out of Iraq. Clinton also pledged on yesterday’s “Meet the Press” that she will oppose further funding of the War as the Senate votes in the coming weeks.

But take a closer look at what Hillary says, and it is not certain what her plans would be about getting us out. Like the other candidates, she is crystal clear about saying she would begin withdrawal – but is vague about when all of our troops would come home. She promised on yesterday’s “Meet the Press” to “end our involvement” in Iraq, but qualified it “at the level that we’ve seen.” Clinton would have fewer troops than what we have right now, but her words imply keeping a residual force for an undetermined period of time.

Which is really not that different from what Bush – who has taken initial steps towards reducing the surge – told the Beltway reporters. “He indicated that he wants to use his final 16 months to stabilize Iraq enough,” said the Post, “and redefine the U.S. mission there so that the next president would feel politically able to keep a smaller but long-term presence in the country.”

According to Stephanopoulos, Bush analogized himself with Harry Truman and Hillary to Dwight Eisenhower. “He believes that whoever replaces him,” said Stephanopoulos, “like General Eisenhower when he replaced Truman, may criticize the president’s policy during the campaign but will likely continue much of it in office.” Hillary may talk tough on the campaign trail when attacking Bush’s Iraq policy, but when she becomes President will hesitate to withdraw our forces.

All of this sounds like farcical ramblings of a lame duck President, but Stephanopoulos recounted the analogy yesterday when he had Hillary Clinton on his TV show. Rather than deny it, Hillary replied that she would “likely continue a presence in Iraq” to fight Al-Qaeda, protect civilian employees and the U.S. embassy, train the Iraqi army, and protect the Kurds. When Stephanopoulos asked her to pledge that all U.S. troops would be out of Iraq by the end of her first term, Clinton refused.

While Bush believes that Hillary will succeed him and continue the occupation of Iraq, Bill Clinton – who would be the most powerful and influential presidential spouse in history – has cultivated a close relationship with the elder George Bush, a man he defeated in 1992. “They have come to consider each other to be family,” reported the New York Times, “spending time golfing, boating and kibitzing about foreign policy.”

This is not just an instance of two elder statesmen who bury the hatchet after retiring from public life. As the Times reported, the Bush-Clinton alliance has only one historical precedent – John Adams and Thomas Jefferson, who became friends after running against each other in the 1800 election. You did not see Franklin Roosevelt and Herbert Hoover becoming close friends after their rivalry, or Jimmy Carter and Ronald Reagan.

Other pundits have observed the growing alliance between Bush and Clinton – as if the 1992 election, which repudiated the trickle-down economics of the Reagan-Bush era, is now a distant memory in the minds of these two Presidents. Bush Senior is concerned about his son’s legacy, and Clinton wants to lay the groundwork for his wife’s political future. With Bill Clinton’s influence as President Hillary’s husband, progressives have reason to be worried.

While John Edwards and Barack Obama stake out more progressive positions on Iraq than Hillary, a Rasmussen poll shows that a higher number of Democrats view Clinton as “liberal.” With Bush predicting that Hillary will keep us in Iraq, and Bill keeping close ties with the Bush family, what reason do these voters have to view Hillary as “liberal” – besides mere perception?

But in politics, where most voters rely on low levels of information, “perception” can soon become “reality.” It doesn’t matter what the truth really says, as long as a certain line gets repeated so that it becomes accepted lore. Despite warning signs of what she would do with Iraq, Hillary could still win the Democratic nomination as the “liberal” candidate.