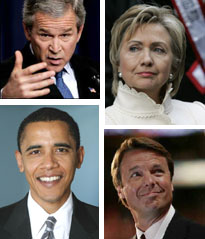 After both houses of Congress passed separate bills setting a deadline to get out of Iraq, the House and Senate passed a final budget calling for withdrawal and sent it to the President yesterday. Bush has vowed to veto the legislation, while having the nerve to blame Democrats for holding up funding for our troops. But despite overwhelming public support for what Congress is doing (and anemic approval ratings for the President), the media refuses to state the obvious – George Bush, not Congress, is jeopardizing the war’s funding by threatening to veto.

Today I leave for San Diego to attend the California Democratic Convention, where Hillary Clinton, Barack Obama, John Edwards and other candidates will address the delegates. As California voters prepare to pass a February 2008 proposition that calls for us to get out of Iraq, presidential candidates will be scrutinized this weekend on where they stand – and have stood – on withdrawal. With the current showdown between the President and Congress, presidential candidates must make a strong case to party delegates that they are worthy of support on this issue.

On April 25th, the House passed a $124 billion supplemental that would mandate that troops begin to leave Iraq no later than October 1st, with the goal of complete withdrawal by March 2008. Yesterday, the Senate passed the same budget 51-46, with every Democrat except Joe Lieberman voting “yes.” The vote breakdown was virtually identical to the House vote on the previous bill – as well as the earlier Senate vote – indicating that despite threats from the White House, Congress is holding the line.

Everyone knows that George Bush will veto because it calls for an actual deadline, despite overwhelming support from the public – who says they trust Congress more than the President on Iraq. But rather than blame the President for his stubborn arrogance, the media is putting pressure on Congress. In its coverage of yesterday’s Senate vote, the Washington Post reported how Democrats “must water down the bill to a point where Bush will sign it – or risk the political fallout of failing to fund troops on the battlefield.”

Why would Democrats be “failing to fund troops” when it is George Bush who refuses to sign a $124 billion spending bill? First, he said he would not meet with Democrats unless they preemptively agreed to drop a withdrawal date. When Pelosi and Reid refused, he said he was “open to negotiation” if they ultimately agreed to his terms and passed a “clean bill.” Then he sent his attack-dog Cheney to accuse Democrats of playing politics with the War. Why should the Democrats have to negotiate and remove any firm deadlines on the War when the burden is on the President to sign the budget?

As Barack Obama said, “we are now one signature away from ending the Iraq War. President Bush must listen to the will of the American people and sign this bill so that our troops can come home.” If anyone should negotiate, it is George W. Bush. But somehow, despite a 57-38 approval for withdrawing our troops by a firm deadline and a President at a 33% approval rating, the mainstream media says it’s Democrats in Congress who must compromise.

In California, voters will soon take the matter into their own hands. With our upcoming presidential primary in February 2008, State Senate President Don Perata has placed a statewide referendum calling for the United States to “end the occupation of Iraq and immediately begin the safe and orderly withdrawal of all U.S. forces.” San Francisco voters easily passed a similar measure in 2004. According to the latest poll, California voters approve it by a two-to-one margin. Among Democratic voters, it’s a 10-1 margin.

If the United States hasn’t started withdrawing by February (which is likely given the President’s attitude), California’s vote will send a strong message – and put more pressure on Republicans who fear an angry electorate in November 2008. It will keep the issue of an immediate withdrawal from Iraq as the top issue in the upcoming election. Meanwhile, the fact that California will be voting on this puts the pressure on Democratic Presidential candidates right now to come out and support it.

Which brings us to this weekend’s state party convention in San Diego. Hillary Clinton, Barack Obama, John Edwards, Bill Richardson, Chris Dodd, Dennis Kucinich and Mike Gravel are all scheduled to speak. Delegates at the convention are expected to pass a resolution in support of Perata’s ballot measure, and every presidential candidate should be asked to commit to their full support. Last week, Assembly Speaker Fabian Nunez endorsed Hillary Clinton for President. With party activists skeptical of her opposition to the War, can he use his influence to get her to sign on?

EDITOR’S NOTE: Paul Hogarth will be a delegate at the convention from the 13th Assembly District. Stay tuned on Monday for a full report of what happened at the Convention. Send feedback to paul@beyondchron.org