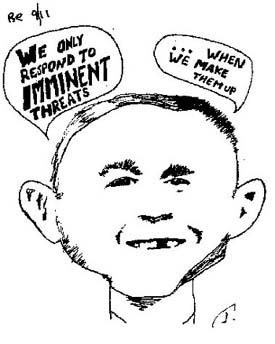 Two weeks ago, Dick Morris, advisor to both Bill Clinton and Trent Lott, wrote a widely circulated op-ed piece arguing that Bush had Kerry on the run. His evidence was poll numbers showing that Bush’s attack ads against Kerry had boosted the latter’s negatives and given Bush a lead in most polls.

But last week on the news show Hardball, Morris had a different view. Noting that Bush had dropped 9 points the past week in tracking polls, Morris explained “When you run a campaign as a war president you sort of have to win the war.”

While the most recent Newsweek poll found 57% of Americans still believing that the occupation of Iraq was a good idea, all other poll questions about Iraq spelled bad news for the President. Bush said last night that the Iraq situation may well get even more “difficult”which is hard to imagine since we have already seen people set on fire and hung from bridges.

Who would have thought that Karl Rove and company would appreciate the 9/11 hearings for diverting attention from a military campaign that many saw as ensuring Bush’s victory in November. But for most progressives, glee from Bush’s political decline is eclipsed by the horror of death and destruction that the US invasion has triggered in the Middle East.