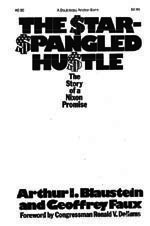 A common frame has emerged around the George W. Bush presidency: it is said to have exceeded any prior administration in its contempt for public opinion, incompetence, and use of outright lies to shape domestic and foreign policy. But as Arthur Blaustein and Geoffrey Faux showed in 1972, these exact traits were fundamental to the pre-Watergate Richard Nixon presidency. And Rumsfeld and Cheney were there, with the former using lies and deceit to kill the nation’s brief War on Poverty. Reading The Star-Spangled Hustle’s account of Nixon’s first term, especially the president’s plan for “Black Capitalism,” is like lifting headlines from today’s news—and the allegedly Nixon-hating media promoted that Administration’s lies just as eagerly as it has done for George W. Bush.

A few weeks ago I was talking to Arthur Blaustein about my disgust at government’s approach to economic development in low-income minority communities. He replied, “I wrote a book about that,” and gave me The Star-Spangled Hustle.

The book is a revelation.

Not surprisingly, it is also out of print. But very low-priced used copies are available on the Internet.

The book is a revelation for several reasons. First, it shows how the Nixon Administration engaged in the same pattern of outright lies and deceit, which our allegedly wonderful pre-Watergate media accepted at face value and then fed in large spoonfuls to the American people.

While Nixon is widely known for his lies about Vietnam and Cambodia, this book focuses on his domestic lies, particularly regarding government policy toward poverty and African-Americans.

During the 1968 election campaign, Nixon sought to offer a competing approach to helping African-Americans. Rather than rely on “Big Government,” he would emphasize “Black Capitalism,” which meant boosting African-American businesses and allowing the genius of the capitalism to lift blacks out of poverty.

A good number of “liberal” minded corporate leaders bought into Nixon’s reliance on private sector solutions for the black ghetto, but a problem emerged: the private sector was not interested in boosting black business, and never had been. The last thing these corporations wanted to do was invest their money into helping black capitalism—their idea of “helping” the poor was giving money to the Community Chest.

So what did Nixon do to make these corporate leaders feel good about doing nothing? He developed a series of mammoth tax breaks for corporate America to “induce” them to hire poor blacks. A federal program to benefit African-Americans in Oakland, California gave $10 million to World Airways, a former Oakland-based airline.

That $10 million was used to provide job training for fourteen disadvantaged blacks.

That’s almost one million dollars per job, and the company did not have to give any of the money back.

Are you beginning to see where Haliburton learned the game?

And what was so brilliantly malicious about Nixon’s misuse of federal anti-poverty funds is that when the media eventually exposed these scams, the message was that the government “shouldn’t throw money at problems.”

In other words, corporate America took money earmarked for the poor, misspent it, and the public was told that it showed that government spending on the poor had not accomplished its goals and should be reduced.

No book better explains the quick death of the War on Poverty than this one.

And who did Nixon put in charge of killing programs for the poor? Donald Rumsfeld, the man who thirty years later brought us the Iraq war and Abu Ghraib.

What were Rumsfeld’s qualifications to be Nixon’s Director of the Office of Economic Opportunity? As a congressmember, Rumsfeld had voted against antipoverty legislation, as well as funding for the agency he now headed. His mandate was to dismantle the OEO, which he largely succeeded in doing in only eighteen months after which a grateful Nixon gave him a promotion.

George W. Bush is clearly not the first President to reward officials for increasing human suffering.

Where was our intrepid Watergate-era media to expose Nixon betrayals of his 1968 campaign promises to the black community?

Playing the same role it exercised around Iraq—it quoted corporate and government officials and ignored what is really going on.

For example, Nixon instructed his Secretary of Agriculture to give speeches announcing that the Administration would have the “first complete, far-reaching attack on the problem of hunger in history.” But he also told the Secretary, “ Use all the rhetoric, so long as it doesn’t cost money.”

Nixon had already learned, as Bush would later demonstrate in the 2000 election campaign, the media is more concerned about what you say than what you do—or have done.

The authors offer many examples of the media’s failure to adequately inform the public. My favorite was the New York Times running a January 12, 1972 article, “Blacks, Looking at Economy, Voice Despair,” on page 16. Eight pages prior to this short two-column article was a major story titled, “In the World’s Richest Nation, Ongoing Problems.”

What problems were identified as the three most important? Not poverty. Not unemployment, racism, slum housing, the lack of economic development or lack of health care. No, the top three problems chosen by the Times were:

“Despite Need, Few Want to be Maids of Butlers”

“The High Cost of Medicine”

No wonder these Nixon alums running the Bush Administration thought they could lie with impunity and get away with it. They had seen this same strategy help deliver a landslide re-election victory to a deceitful presidential administration over thirty years earlier.

With the government and private sector practicing “benign neglect” of the poor, the “liberal” foundations needed to step up to the challenge. But they too offered more rhetoric than money. At a time when the nation’s black communities were facing steep unemployment, rioting, and despair, foundations were instead giving money overseas; one Mellon family foundation in New York City ignored Harlem to give thousands of dollars to study “Roman and Etruscan town plans.”

Because the authors combine their anger with a sarcastic and often humorous tone, the tragedy of what they are describing is more easily digested. But the consequences of what they describe—the premeditated killing of sufficient federal funding to meaningfully address poverty—are with us today.

When we read about murders in Newark, Oakland, or in our own Western Addition and Bayview-Hunters Point, its roots are in the legacy of federal neglect for urban America for which Nixon’s election in 1968 was a turning point. From 1968-70 there was still majority support for investing in low-income communities, which is why Nixon had to endorse “Black Capitalism” as an urban revitalization strategy in his campaign.

It took only a few years for Nixon, Rumsfeld and others to get the public to associate antipoverty efforts with wasteful government programs. America’s low-income population has never recovered from this deceit, and has paid a particularly steep price for the Nixon-Bush political agenda these past eight years.

The Star-Spangled Hustle is a brilliant work that should be read by all those wanting to know the truth about America’s War on Poverty.