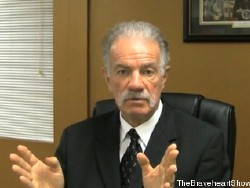 The same creepy Gainesville, Florida folks who gave us the “no homo mayor” campaign (to protest an openly gay candidate for mayor) and who claim that queers hate good ol’ American free speech because they “don’t want to hear the truth about their perverted lifestyles,” will now present “International Burn a Koran Day.” To commemorate the ninth anniversary of the tragedy that befell the Twin Towers in New York, the Dove World Outreach Center, a Christian denomination (it calls itself a New Testament Church, whatever that is), will take a match to the Muslim holy book this September 11.

The church has even set up a Facebook page for the event, and at this writing has garnered over 1,100 supporters. A page opposed to the event has almost 800.

Pastor Terry Jones, head of the church, told Hemant Mehta of the Friendly Atheist blog that he expects hundreds to attend his event, the culmination of years of anti-Islam activities that included authoring a book trashing the religion.

“We hope,” Jones said, “to reach Moslems and Non-Moslems to awake an awareness that the Koran is a book of lies and that the only true salvation is in Jesus Christ.”

Does Jones expect backlash from Moslems? “Of course we do because Islam has proven itself to be a violent religion and Mohammed promoted violence in the Koran.”

Perhaps Jones forgets the atrocities that Christianity has committed over the years, including crusades, pogroms, Inquisition, witch burnings, forced conversions, etc. When it really comes down to it, the Old Testament glorifies a lot of violence and inhumane behavior (slaughter of neighboring tribes, stoning of disobedient children, etc.) on the part of “god’s people.”

I’m not defending Islam. I’m an atheist and an equal opportunity religion basher. I have no love for any religion or sacred book.

But Jones strikes me as a pathetic publicity seeker and this his latest gimmick to gain another 15 minutes of fame and perhaps save a church that seems to be sinking. According to reports in April, Jones was facing “mortgage issues.” Last year, he was being investigated for possible violations of his tax-exempt status.

Obviously, Jones is not being ecumenical and trying to “reach Moslems” with his childish “my Jesus is better than your savior.” No one’s ever converted anyone else by burning their sacred books or calling their religion “of the devil.”

Unless they had armies and guns to back them up. Fortunately, Jones only has a crumbling church and a bunch of followers who think he has a direct iphone line to some deity in the sky.