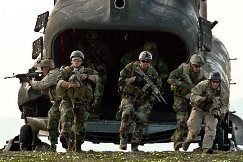 The Pentagon’s budget proposal for next year was announced last week by Secretary of Defense Chuck Hagel. In an interview with The New York Times, Hagel argued that to meet today’s national security needs, the Department of Defense (DoD) must shift its focus and capabilities away from “fighting grinding ground conflicts” and towards “new arenas of combat.”

To achieve these ends, the budget calls for a realignment of the military that would reduce the total number of ground troops to its lowest level since 1940 and discontinue some military equipment deemed obsolete or unnecessary. According to Hagel, current levels of both assets are “larger than we can afford to modernize and keep ready.” The proposed budget also includes reductions in personnel benefits and base services, as well as base closings. The targeted cuts, however, are only one aspect of the budget. The other involves the new sources of priority spending.

The budget plan includes a call for greater expenditures on computer-based technologies and special operations. The Nation’s Bob Dreyfuss reports that the “cuts would fund new projects including cyberwarfare capabilities, $1 billion for a more fuel-efficient jet engine, and plans for a new Navy surface ship.” Despite the cuts to traditional aspects of the military, the DoD has no plans to shrink or limit programs that would undermine America’s ever-growing hegemonic objectives. Dreyfuss writes, “Major weapons systems that might have been cut were sustained, the US special forces units are being increased substantially from already high levels” and “the US Navy would maintain all eleven of its aircraft carriers.”

According to National Priorities Project, a nonprofit, non-partisan federal budget research organization, even as Hagel is requesting “cutbacks in a number of military programs, the Pentagon isn’t planning any major reductions in spending any time soon.” While the cuts translate to savings in specific areas, “the new Pentagon budget does not project a commensurate decline in spending.” In fact, the United States will continue to carry a defense budget which exceeds that of the next 10 countries combined.

In a blog post titled “New War Budget and Strategy Announced by Obama Team,” Bruce Gagnon, coordinator of the Global Network Against Weapons & Nuclear Power in Space, points out that the Pentagon’s approach “actually calls for an increase of more than $115 billion for war making” and “for ‘sustaining’ the Pentagon’s nuclear triad – air, ground, and sea delivery systems of nuclear weapons.” Furthermore, this budget would bring about “an increase in drones and robotic forces as well as significant expansion in cyber warfare capabilities.” Gagnon warns that “We will see an expansion of US ‘hidden’ wars in the near future and the Obama budget reflects this reality.”

Hagel’s proposal is already receiving pushback from Congress. Most of the criticism has come from lawmakers who financially benefit from the business-as-usual paradigm of the military-industrial complex. Many of these politicians represent districts in which a military base is housed, and therefore both they and their districts could be negatively impacted by the cuts. Few lawmakers, though, are directing their criticism at the fundamental reason the budget is unreasonable and unacceptable; it will facilitate many more clandestine missions across the globe, effectively allowing the DoD and the Executive branch to be less transparent and accountable to the American people and the international community.

The Pentagon’s decision to shift attention to the latest and most deadly technologies should come as no surprise. It is a move that has been in the pipeline for some time, and is already reflected in the deployment of unmanned armed aerial vehicles (e.g., predator drones) and Special Forces or “kill teams.”

Why and how these tactics have been implemented over the past decade has been the subject of scrutiny. Among those who have raised moral and legal questions and warned about the implications of these operations is investigative journalist and best-selling author Jeremy Scahill. His most recent book, “Dirty Wars: The World Is A Battlefield,” which was made into a now-Oscar-nominated documentary film, tells the hidden truth behind America’s increasingly covert, privatized, borderless, permanent war machine. With this budget, we should expect much greater use of this machine moving forward.

Make no mistake. The Pentagon’s proposal to transform the military is a smoke and mirrors plan. It does not represent a dismantling of the military-industrial complex but a chilling morphing of it, and will advance American imperial power and further enrich war profiteers even as it cuts out the troops. Anti-war and peace activists who have long demanded meaningful cuts in the bloated military budget have little to celebrate after Hagel’s deceptive announcement.

This budget does not signal a change in U.S. foreign policy or the nation’s perceived or actual role in the world. The justification and implications of the new military budget reveal the frightening reality of the government’s intention to continue its quest for global domination. It once again exposes the true face of American Empire as it develops and employs new ways to control governments and natural resources under the veil of counter-terrorism and national security.