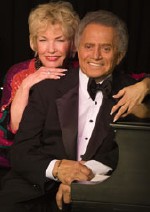 “THEY CAN’T TAKE THAT AWAY FROM ME”

George Gershwin and Ira Gershwin wrote the song in 1937. It was introduced by Fred Astaire in the 1937 film, “Shall We Dance.” Many others have recorded the song – Billy Holiday, Charlie Parker, Ella Fitzgerald, Louis Armstrong, Anita O’Day, Frank Sinatra, Tony Bennett and Diana Krall. Others have also covered the song – but having heard them all, the best and most convincing version I’ve heard so far is by Buddy Greco.

Greco, who was a friend of Sinatra’s, makes the words really mean something: Here is a sample of the words that require great sincerity: With a swing beat – he beats all the rest. He doesn’t yawn his way through the lyrics.

“the way you wear your hat,
the way you sip your tea,
the way your hold your knife, the way we danced till three.”
(each line ends with “no, no they can’t take that away from me.)

The story is that even if lovers part – the memories can’t be forgotten.

With a Latin beat to the song “I’ve Got You Under My Skin” — Greco really turned the audiences heads into bobble heads. They were twisting and turning in their seats along with the music. Watch Out! Keeping up with Greco could give you whiplash. He may be 83 yrs old, but sure looks like he is in his 60’s and moves like he is still 35. He is also a master wizard at the piano. It’s an extra treat that never plays out. Especially on the ending, when he plays the music of the world wide hit “MacArthur Park.” Greco’s arrangement is absolutely beautiful and intricate. Oh, by the way he has a recording out of MacArthur Park (CD) with the London Symphony Orchestra. He and his Son (on the drums) go at each other with relish. What a fantastic finish to a superb evening that you hate to see end!

A big surprise was Lezlie Anders, a singer that was discovered by Sinatra. “He was so impressed with her singing, that he took me to a really small club on the outskirts of Las Vegas to see her. Now I want you to meet Mrs. Greco. She is gorgeous.” – he said.
And – so she is — and Anders (wife #5) is a marvelous singer. Anders sang about seven songs. There was a couple of Peggy Lee songs, “Moments” and the classic “Fever”. Both renditions were sensational.

Greco ended with a swellagant rending of the Fab “The Lady is a Tramp”. It was a crackling star performance. Personally, as good as Sinatra was – I think Greco is better.

Greco was at the Rrazz Room at the Hotel Nikko. There are plans from him to come back. Now at the Rrazz is Kim Nalley with a tribute to the Great Billy Holiday.

FROM THE FLIRTY, DIRTY MIND BEHIND DIRTY LITTLE SHOWTUNES TOM ORR IS BACK WITH ‘TOM ORR A CRASS ACT’. Musical direction by Scrumbly Koldewyn and Directed by F. Allen Sawyer. Keep in mind that this is a musical comedy cabaret for consenting adults. You might be carded at the door. Aug 27 thru Sept 12. More info: www.nctcsf.org.

CUSTOM MADE IS “MOVIN’ ON UP” TO THE NEXT STAGE (1620 Gough Street/at Bush. “We had four great years at Off-Market, says Katz. But the opportunity to grow at The Next Stage is too good to pass up. They will produce five mainstage productions at The Next Sate in 2009/10 starting with “The Heidi Chronicles” by Wendy Wasserstein. Info: http://www.custommade.org/.

THE SAN FRANCISCO OPERA OPENS A NEW PRODUCTION OF IL TROVATORE AT THE OPERA HOUSE. In addition they are going to have another fabulous free showing at the Ball Park of Trovatore on Sept. 19, at 8Pm. Time. 3 hours (with one intermission). For best seats get there early – and you should register early with the Opera for your tickets.

In the Opera production — Quinn Kelsy as Count di Luna will replace Dmitri Hvorostovsky in two performances of Trovatore.

CAST — Marco Berti (Manrico), Sondra Radvanovsky (Leonora) Stephanie Blythe (Azucena). Burak Bilgili will play Ferando, Renee Tatum is Inez and Andrew Bidlack is Ruiz. Ticket prices from $15 to $310 and can be purchased on line or by phone.

For instant updates all the time: twitter.com/famereporter