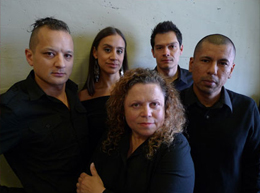 BRUJA (The Witch)
By Luis Alfaro

This amazing, sizzling play (based on Medea is Electrifyingly alive, and thrillingly memorable. We’ve all seen the Greek Tragedy Medea many times – but this translation has an undertow, that is tart as a cherry. There also are comic touches, that are iced with an ironic edge.

What you get here – is a masterpiece. There are moments of tenderness and unexpected betrayal. Men will do anything for money. However, the money train crashes and burns a relationship. Her hot Latin lover has given Medea two Children. The boys dress the same, they love to play Soccer, but they will not live through the night because their mother (Medea) is out to get revenge. Sabina Zuniga Varela (Medea) is very upset and she is hell bent to destroy everyone in her family with her fascinating Witch dances of the Palms.

Her housemaid, Wilma Bonet (Vieja) is pure exhilaration. She is one of the most unexpected and greatest discoveries on the stage. Vieja clings to the methods of the old Country. She spiritually clears the space around Medea, and then places a hand on Medea’s head, a ritual they have been doing forever. Medea and Vieja pray briefly in whispers that are so secret that we can hardly hear what they are plotting.

The men are not left out of this thrilling masculine world. They strip their shirts off to be ‘healed by Medea”. She touches the tight firm body of “Aegeus” (Armando Rodriquez), as Medea works her witchcraft to heal his body to get his wish to have a child with his wife. And it worked.

This terrifically exciting work b playwright Alfaro always has something spectacular to say in this exquisitely mounted production.

This is Theatre that throbs with life. Yes, that’s your pulse that you feel. If this show doesn’t move you – then you have my condolences.

100 SAINTS YOU SHOULD KNOW

Stories about ‘Heartbreak’ are not new but this production about love, a Priest and A young girl who thinks she is cool, messes up her life and heart in a big way. Not to mention religion. Could it be because of ‘Happy Pills?” And the answer is yes.

The play keeps us on the edge of our seats and why a Priest (Matthew) is on leave from Church. He carelessly left around some homoerotic pictures. The Church does not think that he should have the pictures, which really are just Art photos from a collection of famed George Platt Lynes photos from an Artsy, tasteful book – nothing shocking there in this day and age.

Then the Priest moves in with his overly religious Mother (Colleen). She is so religious that is it completely unbearable. Why her son Matthew stays with her, is beyond belief. To me – she is a way over the top with the religious business. Just short of climbing up on the cross. Where are the nails?

Matthew’s Dad — also an Irish Catholic Devotee – suspects that Matthew is Gay. We never did find that out for sure, but at times he comes close to being bi-sexual. Then there is the inquisitive boy next-door. He asks the Priest one afternoon – are you a “Fag”? – I heard that you are. Matthew answers – “No – I’m not!” Turns out. The young man is really searching for an answer – because it is him that is confused over his sexuality.

This play has many strange revelatory moments in it that will appreciate over time. It’s doesn’t get any more wistful and meditative. You could say that this is a coming of age story about boy meets girl and boy would rather meet another boy or man. The girl is drowning in booze and gets the boy to take way too many swigs. It doesn’t have a pleasant ending to that part of the story.

This very sensitive play about excessive morals between the two youngsters is a big mistake on their part. The stars (and they are STARS) flesh out some of the best extraordinary Acting around. They loom large in the small stage, to bring us the most exhilarating story telling around.

The Church will hold on to a Tragedy that saddens everyone, while they hold onto the cross. I see it as a powerful indictment of religion.

JOHN FISHER (Director) has produced a bold, lucid and insightful version of the play.

THE WHIP SMART ACTORS ARE: Ann Lawler, Wylie Harman, Kim Stephenson, Tamar Cohn and Michael Rosen. They made this “Gripping” play – “A Triumph!”

THE KATE FODOR PLAY WILL RUN THROUGH JUNE 17 at The Thick House at 18th Street @ Arkansas St. in SF.