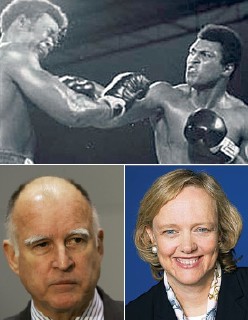 On October 30, 1974, wily veteran and former champion Muhammad Ali faced heavyweight titleholder George Foreman in Zaire in what became known as the “Rumble in the Jungle.” Foreman had youth, size and power on his side, and spent early rounds pummeling Ali. But Ali accepted this early punishment as part of his now legendary “rope-a-dope” strategy, by which he waited out Foreman’s early assaults and then waited for the champ to tire and ultimately fall. By the 8th round, the younger, bigger, and more aggressive Foreman was done – and Ali regained the title. Meg Whitman has assumed the George Foreman role in the California Governor’s race, while Jerry Brown plays Ali. Whitman has thrown millions and millions of dollars at Brown early in the fight, and in true rope-a-dope fashion Brown took the hits and did not respond. Now Brown is ready to go on the offensive – and Whitman, like Foreman before her, is ripe for the taking.

It’s clear Meg Whitman is not a boxing fan. Otherwise, she would not have repeated George Foreman’s tactical error in his now legendary title fight against Muhammad Ali, a battle that forever enshrined the phrase “rope-a-dope” in the popular lexicon. The fight was the subject of the 1996 Oscar-winning documentary, When We Were Kings, and is discussed in many other films on Ali.

Like Foreman in the early rounds against Muhammad Ali, Meg Whitman has poured millions into attacking Jerry Brown in hopes of dealing him an insurmountable blow. And just as radio announcers covering the fight were mystified at Ali’s refusal to mount a strong counter-attack, so the progressive blogosphere worries that Brown is killing his chances by not aggressively responding to Whitman.

But like Ali, Brown has not been hurt by Whitman’s barrage of early punches, most of which have missed the mark. Meanwhile, voters are already tired of Whitman’s media assault, and their impact – like Foreman’s blows – have started to weaken before the fight has really begun.

Nobody knew boxing strategy better than Muhammad Ali, and there is no California politician who knows the ropes better than Jerry Brown. I have been marveling at the pundits arguing that Brown is in deep trouble due to his rope-a-dope strategy, as if they have greater political savvy of a guy who has won election to more major California offices than anyone in history.

Just as Foreman gained little by using up all of his strength in early rounds, so has Whitman’s ad barrage failed to boost her poll numbers. In this case Jerry Brown is even better positioned than Ali, as the wily boxer lost the early rounds while the wily Democrat remains ahead.

Whitman’s Troubles on the Right

While Brown has conserved his resources for the heart of the campaign season – which typically begins after Labor Day – Whitman’s early ad blitz has actually weakened her potential base.

A July 25 Los Angeles Times story, “Radio hosts pounce on Whitman’s softening her tone on immigration,” describes the conservative backlash against Whitman’s new ad campaign that seeks to soften the anti-immigrant stance she adopted during the Republican primary. John and Ken (John Chester Kobylt and Kenneth Robertson Chiampou) are prominent conservative talk-show hosts on Los Angeles station KFI, and have been on a tirade against Whitman for her newly declared opposition to the Arizona anti-immigrant law and her backing off from her previous hard line stance.

The two influential hosts have even accused Whitman of “purchasing” a Sacramento talk show host so that he would denounce the KFI crew for risking Whitman’s defeat. The hosts believe that KTKZ-Sacramento talk show Eric Hogue was paid to criticize their attacks on Whitman, allegations based on a check Whitman’s campaign paid to Hogue for an online attack on them.

So Whitman’s ad barrage has alienated radio hosts who speak to conservatives five hours daily in Southern California. When Whitman appeared on the John and Ken show on August 4 to help repair the damage, it was by all accounts a disaster. Check out some of the comments on the conservative CalWatchdog website, which are more contemptuous of Whitman than what is typically found on progressive blogs.

If a Republican is doing battle with John and Ken and conservative bloggers, their chances of prevailing in a California statewide election are near nil.

And let’s not forget that it was Whitman’s expensive ad campaign that put her in the political pickle she now faces on immigration policy, not anything said or done by Jerry Brown. By not publicly fighting back and instead playing rope-a-dope, Brown allowed Whitman to be hoisted on her own petard – with Brown’s fingerprints almost nowhere near the accident scene.

I say “almost” because it was Brown’s appearance on the John and Ken show that pretty much forced Whitman to make what became a nightmarish visit to her tormentors. As one online commentator put it, “her dozens of consultants obviously knew they needed to put her on John & Ken, despite the risk, to avoid them calling her chicken after Jerry Brown has been on.”

Picketed by Latino groups, in a major public fight with the California Nurses Association and in trouble with Republicans over her stands on immigration and global warming (she opposes Prop 23), Whitman has spent millions of dollars to become less popular with the electorate. And having played Ali’s rope-a-dope strategy to perfection, Jerry Brown will soon unveil his own attacks to put the already weakened Whitman down for the count.