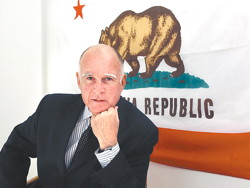 In an interview with Charlie Rose on “CBS This Morning” May 18, Governor Jerry Brown called for tax hikes to bring down a budget deficit of nearly $16 billion – while promoting the construction of a budget-busting $14 billion peripheral canal or tunnel.

Brown’s estimate of the cost of the canal at $14 billion is up from the “over $10 billion” estimate he made in January. However, the real cost of the canal, proposed under the Bay Delta Conservation Plan (BDCP) to divert more water from the California Delta to corporate agribusiness and Southern California, is much larger. Economist Jerry Kasower in 2009 estimated that the actual cost of the project would range from $23 billion to $53.8 billion, depending on whether a canal or tunnel is chosen.

The Governor defended both the canal project and his $68-billion plan to build a high-speed rail system, in spite of $15.7-billion deficit, as he promoted his November ballot initiative to raise taxes and defended his revised state budget. He claimed the $14-billion water project was necessary to “make sure we have a reliable water supply.”

“You know, this is where they put in, they invented Facebook,” he claimed. “Not in Texas, not in Arizona. Not in Manhattan, and certainly not under the White House or the Congress. This is still the Wild West, and we’re going to prove to the rest of this country and the world that we know how to do ‘it’”

Rose countered that Facebook was invented in Cambridge, Massachusetts, not California. Brown responded that after inventing Facebook there, “they learned fast to get on a plane and get out to California, where all the other innovative people are.”

Brown said his budget plan would increase the sales tax to 7.5 percent from 7.25 percent and raise income taxes on people making over $250,000.

“Combined with that, we’re making some very drastic cuts in almost every area of state government,” said Brown. “So we are going to start living within our means – something that hasn’t truly happened for the better part of 30 years.”

While Jerry Brown slashes the state budget, he is fast-tracking a government boondoggle that will deliver more subsidized water to corporate agribusiness interests so they can market the water back to the public for an enormous profit.

Not only will this canal put Californians in debt for decades to come, it will hasten the extinction of Sacramento River chinook salmon, Delta smelt, longfin smelt and other fish species, according to agency and independent scientists alike. This will lead to the loss of thousands of economically valuable jobs in the recreational and commercial fishing industries.

While the canal will result in unprecedented ecological destruction, Southern California ratepayers are alarmed by the canal’s enormous cost. The Metropolitan Water District (MWD) has admitted it would pay at least 25% of the cost of the project, which could go over $50 billion. MWD has already admitted that it will need to increase water rates every year for the foreseeable future.

Rose’s interview with Jerry Brown was one of the greatest examples of political cognitive dissonance I’ve ever witnessed. How can one call for draconian budget cuts and tax hikes while promoting a canal that will indebt Californians for generations to come?

Brown claimed in his interview that “We’re not some tired country of Europe. We’re a buoyant, dynamic society that will both discipline itself on a daily basis but it will on the long-term plant the seeds of future growth.”

In light of Brown’s renewed call for the canal’s construction, it is crucial for everybody concerned aboutCalifornia’s future to support AB 2421 (B. Berryhill). This bill supports an independent cost-benefit analysis before committing the public to pay tens of billions of dollars to build a peripheral canal or tunnel to divert more Delta water.

For more information about the campaign to stop the canal, go to http://www.restorethedelta.org.

This piece was first published at Alternet.