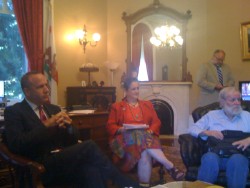 Low-income telephone customers won a brief reprieve last month, after the California Public Utilities Commission temporarily shelved a dangerous plan to gut the Universal Lifeline program. But the battle is far from over. While the AT&T backed plan is being “re-written” at the CPUC, the measure’s sponsor – Commissioner Rachelle Chong – is up for a confirmation vote by the State Senate to a full six-year term. Yesterday, a diverse coalition of advocates went to Sacramento to lobby against Chong’s re-appointment. Two residential hotel tenants from the Central City SRO Collaborative who were selected by their peers to go joined senior advocates, consumer groups, Latino leaders and faith based groups – to express strong opposition to a Commissioner who has disregarded the CPUC’s mandate to protect consumers. After a grueling day at the State Capitol, we met with four of the five members of the Senate Rules Committee – and all four of San Francisco’s delegation in the legislature. “I’m impressed,” said State Senator Gil Cedillo (D-Los Angeles), after we told him who else we had met with that day. “I can’t even get a meeting with four of my colleagues in one day.”

The California Public Utilities Commission is one of the most powerful bodies in the state, with a budget as large as the state General Fund. The five CPUC Commissioners are supposed to look out for consumers and regulate utility industries, but too often fall under the influence of PG&E and AT&T. Appointed by the Governor to a six-year term, the only “check” on the CPUC’s power is a confirmation vote by the State Senate – but rejections almost never happen. But we were going to try to stop Commissioner Chong.

Universal Lifeline is a program mandated by the state legislature – but regulated by the CPUC – which provides a “no-frills” telephone line at an affordable rate of $6.11/month – allowing poor people to keep in touch with doctor’s appointments, job interviews and loved ones. But Commissioner Chong’s proposal replaced the flat rate with 55% of the highest market price (when AT&T has jacked up telephone rates.) Only after hundreds of seniors and low-income tenants representing various organizations spoke out at multiple hearings did the CPUC suspend this proposal, but it will be back after Chong gets confirmed.

For Catalina Dean, who lives at the McAllister Hotel – where her income is $104/month under Care Not Cash – the idea of keeping Chong on the CPUC is absurd. “What else is her job,” she asked, “if it’s not to look out for low-income people who need a phone?”

But other groups oppose Chong’s confirmation. For the first time ever, the largest three consumer rights groups in California – TURN (The Utility Reform Network), UCAN (Utility Consumer Action Network) and the Greenlining Institute – are working together to oppose a CPUC nominee. Hene Kelly of the California Alliance of Retired Americans (and San Francisco Senior Action Network) also joined us on the lobbying trip to oppose Chong, as did Minister L.B. Tatum of the Los Angeles Metropolitan Churches.

And Chong has alienated many ethnic-based groups who had once supported her on the CPUC to represent their community interests. “When the Governor appointed Chong in 2005 [to complete Susan Kennedy’s unexpired term],” said Sam Kang of the Greenlining Institute, “a lot of us supported here confirmation.” But leaders like Faith Bautista of the Mabuhay Alliance, and Viola Gonzales of the Latino Issues Forum were there to explain how Chong had not reached out to their communities. “When I complained to Chong about diversity issues,” said Kang, “she said that it’s not her job to ‘enforce quotas.’”

Our delegation met with the four state legislators who represent San Francisco – Senators Mark Leno and Leland Yee, and Assemblymembers Fiona Ma and Tom Ammiano – all of whom had submitted letters to the CPUC opposing Chong’s deregulation of Lifeline. Although none of them are on the Senate Rules Committee, we dropped by to thank them for their support – and to ask them to help persuade their colleagues to oppose Chong.

We also met personally with four of the five members of the Senate Rules Committee – Democrats Darrell Steinberg (who is also President of the State Senate), Jenny Oropeza and Gil Cedillo, and Republican Bob Dutton. We also met with the Chief of Staff of Republican Senator Sam Aanestad. Before the State Senate gets to vote on Chong’s confirmation, it must first pass a hearing at the Senate Rules Committee – when our delegation will return to Sacramento, and speak out during public comment.

Chong’s confirmation was scheduled for next week’s Senate Rules Committee. But the hearing has now been postponed – along with all of Governor Schwarzenegger’s appointments – due to State Senate President Darrell Steinberg’s strong disapproval of Arnold’s “blue-pencil” budget cuts that hurt the most vulnerable Californians. Steinberg and other Democrats have filed a lawsuit against the Governor, alleging that these cuts are unconstitutional. I thanked Steinberg for his leadership on Arnold’s budget cuts, and reminded him that Chong’s actions at the CPUC are hurting the very same people.

The other two Democrats on the Committee might vote “no” on confirming Chong. Gil Cedillo has long been a champion for the poor (such as his controversial legislation to ban “patient dumping”), and we hope he will take a similar stand on CPUC appointees who are messing with Lifeline. Jenny Oropeza has also been willing to take a stand on commissioners. For example, she recently blocked the confirmation of a homophobic appointee to a public safety commission. We hope she will also do the right thing here.

By being the point-person for deregulating Lifeline telephone service, Commissioner Rachelle Chong has jeopardized her tenure on the CPUC. And for low-income people across California who are struggling in this economy, they’d be glad to see her go.