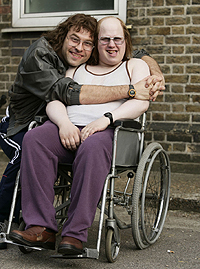 “Why would you ever want to leave? Anyone who goes on holiday abroad is a traitor! God, I love it here… The Sistine Chapel? British! The Pyramids of Egypt? British! The first moon walk? British! Yet none of those wonders would be possible without the people of Britain, and it is they that we do look upon now… Boom-Boom, shake the room!!”

That phase, and many more, are beautifully bellowed each week, by the famed British actor Tom Baker, (known in the late 1970’s as Doctor Who), who narrates the BBC’s hilarious runaway hit, “Little Britain”, my choice for the best comedy of 2005. The creation of comedians Matt Lucas and David Walliams, Little Britain is based on their award winning radio show. Beginning Christmas morning, BBC America will be broadcasting the first and second seasons of the show. Tape it, TiVo it, download it or buy it online, but don’t miss one of the funniest shows you will ever see.

An off-kilter look at modern life, Little Britain was a high-quality sketch show more consistent than most entries in the genre. Anthony Head (billed as Anthony Stewart Head when he appeared as Professor Giles in “Buffy The Vampire Slayer”) appears here as Michael, the Tony Blair-like Prime Minster, and Baker provides a God-like voice as the story linking narrator. Baker’s wit and comments throughout the show are simply unbelievable. “…England is full of Transvestites… I’m wearing a bra and panties right now, but I draw the line there.”

In “Little Britain”, viewers are met with an assortment of memorable characters: Andy, the annoying wheelchair-bound twit who, secretly, can walk without any problem but enjoys being waited on by his caring and endlessly patient friend Lou (these characters grew out of the Lou Reed and Andy Warhol characters the pair had created in “Rock Profiles” and on England’s “The Ralf Little Show”); Sebastian Love, the effete personal secretary to Prime Minister Michael, who has a huge crush on his boss; Vicky Pollard, the teenage ex-Borstal single-mom from the town of “Darkly Noone”, whose stream-of-consciousness speed-talking renders her virtually unintelligible; Daffyd, the Welsh gay who is convinced – despite overwhelming evidence to the contrary – that in Llandewi Breffi he is “the only gay in the village”, Marjorie Dawes, the merciless leader of the Fat Fighters diet club; Dennis Waterman, the actor (portrayed as “tiny”) who wants to compose and sing the theme song for every TV program he is offered, much to the frustration of his agent Jeremy Rent, Jason, a teenager sexually obsessed with his mate Gary’s grandmother and Emily Howard, the particularly unladylike transvestite; and the teachers and pupils of “Kelsey Grammar School” in Flange.

The success of Little Britain has been enormous, and news of a live road show in 2006 created a rush for tickets. Lovers, of “Monty Python’s Flying Circus”, “The Office”, “The League of Gentlemen”, “Absolutely Fabulous”, “Chef” and the classic MTV imported “The Young Ones” will die laughing at “Little Britain”. I watched one episode after learning about it from a British friend now living in New York, and can’t seem to get enough of them.

The British have produced some marvelous programs, many co-opted by the U.S., and not always successfully. “Steptoe and Son” became “Sanford and Son”, for example. “MI-5”, shown on here on A&E (known as “Spooks” in England), simply puts our series “24” to shame. Let me put it to you this way, in MI-5, 24’s “Jack Bauer”, would be dead after the first couple of episodes! So spice up your holiday with a little comedy cheer, and raise your glasses to “Little Britain”!