Bristol Palin and the Republican Double-Standard 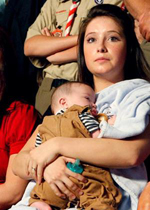 Barack Obama was right when he said Sarah Palin’s 17-year-old daughter is “off-limits” and deserves some privacy. Bristol Palin is not the issue here—it’s her mom’s hypocrisy. Both John McCain and Sarah Palin support “abstinence-only” sex education, so the fact that her unmarried daughter got pregnant is unfortunately relevant within that context. But what’s far more disturbing is how the moral crusaders on the religious right have chosen to respond. Rather than condemn Bristol for “living in sin” (as they’re apt to accuse others), they commend her for not getting an abortion—and planning to marry her boyfriend. On the other hand, when a black unwed teenager from the inner city gets pregnant, these same demagogues denounce it as evidence that our society is crumbling apart. Could there be some latent racism here, which creates this double standard?

You have to feel sorry for Bristol Palin and her boyfriend—whose private lives are now pushed into the limelight. And they have no one to blame but John McCain and Sarah Palin, whose opposition to sex education have made the two teenagers unwilling poster-children for a failed Republican policy. Sarah Palin said in 2006 that “explicit sex-ed programs will not find my support,” and in 2007 a spokesman for John McCain called abstinence the “only safe and responsible alternative” for educating young people.

Given this embarrassing revelation, one would expect the fire-and-brimstone crowd on the far right to throw Bristol Palin overboard—condemning her for bringing “shame” to the family. But you’d be wrong. “It doesn’t affect how I look at it at all,” said Gary Bauer of American Values. “Mistakes are made, and when that happens, the important thing is to love that daughter … and make sure she doesn’t make another mistake.”

The “mistake” that Bauer referred to would be for Palin to get an abortion—and the American Taliban is tickled pink that the 17-year-old will marry the father. “Bristol Palin and her family understand that a new life has been created,” said Bauer. “The commitment to bring that life into the world is a testament to their pro-life philosophy. I commend them for the example they are setting for other women in crisis pregnancies.”

Really? Now Bristol Palin is a role model for how pregnant teenage girls should react in such circumstances? Republican Congressman David Dreier even went so far as to suggest that it makes her “someone who understands the challenges of the real world.” Now we’re supposed to celebrate Bristol’s pregnancy about learning about the facts of life?

I wonder if Congressman Dreier feels the same when a black 17-year-old gets pregnant and chooses not to have an abortion. After all, he voted for the 1996 Welfare Reform Bill—which “discourages illegitimacy and teen pregnancy by prohibiting welfare to minor mothers and denying increased AFDC for additional children while on welfare, cut spending for welfare programs, and enact a tough two-years-and-out provision with work requirements to promote individual responsibility.”

When a teenage welfare mom gets pregnant and opts against an abortion, how many times do you hear Gary Bauer celebrate this as a “life-affirming” moment? When do we hear members of Congress go so far as to say that these girls are role-models? You don’t. They get derided as “parasites” on the public teat—and they re-write welfare policy to actively discourage these mothers from producing more offspring.

In the mind of these right-wingers, not all decisions to have an unwanted pregnancy are created equal. As long as it’s the white daughter of a right-wing Governor, that’s okay. But we don’t want a poor black teenager getting pregnant—for it creates more welfare babies. Is there some latent racism going on here—beneath the blatant hypocrisy?