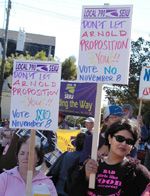 Saturday was shirt-sleeve weather as people from the Bay Area rallied in Mission Dolores Park to bring home our troops from Iraq. With temperatures in the low- to mid-70s, San Francisco anti-war/social justice activists were united with other activists from most of the nine counties as well as people from Washington State, Colorado, and as far away as Michigan and quite probably many others.

Ten rallies were planned and subsequently staged worldwide including the 10,000 people organized by London’s Stop the War Coalition who marched from Parliament to Hyde Park.

In the nation’s capital, ANSWER and United for Peace and Justice brought an estimated 100,000 people together from all over the country where Cindy Sheehan was the featured speaker. (Bush supporters numbered around 100, with one degenerate jerk holding a sign calling Cindy a “Nazi Witch.”)

Of the various speeches, the most memorable and passionate was delivered by Sup. Ross Mirkarimi, who confidently proclaimed: “This war is illegal. George Bush should be impeached.” The Supervisor’s speech could have set the tone for the rally, but others must have read his mind judging from the display of placards calling for not only the impeachment of Bush but of Cheney as well.

Another speaker mentioned Dick Cheney’s impending surgery to remove aneurysms behind his knees and said we could hope for the best. Unfortunately, the surgery was successful and Cheney survived.

Market Street was closed from Church Street to Van Ness Avenue for the contingent of caring people that stretched for at least a mile as a slowly-moving wave that local media stated took two hours to reach Franklin Square at Laguna and Turk Streets.

A local teacher’s contingent carried signs “Money for Schools Not War”, while still others remembered the victims of Hurricane Katrina with “Money for Full Recovery of the Gulf Coast – NOT WAR.”

Other memorable entries declaring the anger and frustration we feel because of the Bush administration’s policy included the comparison of George Bush with MAD Magazine’s Alfred E. Newman.

Finally, no matter what group you watched, someone carried a sign declaring that Bush and Cheney are war criminals.

More than 1,900 U.S. men and women have died thanks to Bush and his gang of neocons. Additionally, more than 20,000 Iraqi men, women, and children have been slaughtered since Bush invaded Iraq. Finally, with the Louisiana National Guard stationed in Iraq, almost 1,100 more U.S. men, women, and children died from Katrina because the Guard members were not home, where they belong, to act as first responders in a devastating emergency.

Last week Bush declared that now is not the time to leave Iraq because it would embolden terrorists; and in a statement regarding Katrina, Bush said terrorists were wishing they had caused the devastation and deaths along the Gulf Coast.

George Bush is responsible for the deaths in Iraq and along the Gulf Coast, and we must hold him personally responsible. Bloggers have been calling for Bush’s impeachment for quite some time now; but as the Washington Post’s Dan Froomkin wrote recently, Zogby will not mention impeachment again until someone in Congress brings up the subject.

Who will be the representative or senator with the courage to call for impeachment?