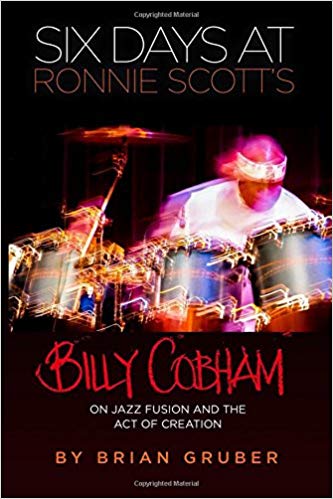 Brian Gruber’s fantastic new book about the legendary drummer Billy Cobham, “Six Days at Ronnie Scott’s”, is perhaps the greatest tome ever written about one of the most influential musicians of this, or any era. Cobham, now 70 plus years young, is quite well known to jazz lovers and drummers the world over. From his earliest days with Miles Davis and later with guitarist John McLaughlin’s Mahavishnu Orchestra, Cobham has blazed a musical path unlike any before him, or since. Over the years, there have been a plethora of articles and interviews with Cobham, spanning decades, a dozen languages and continents, however Gruber has captured Cobham’s anecdotes, insights, and humor like no one before him.

Gruber, like Cobham, was a native New Yorker who turned his considerable media skills (with C-SPAN, FOXTEL, and ShoGo.tv), toward writing. His earlier novel “Dauphin, Dorian and Dead”, and his love of jazz steered him toward his latest effort, “Six Days at Ronnie Scott’s: Billy Cobham on Jazz Fusion and the Act of Creation”. Gruber gives us a rare, behind the scenes look at the making of a six night performance, the musicians, the storied venue, Cobham’s wonderful wife Faina, and all of the people who were part of putting together this amazing event.

The majority of the book chronicles the dialogue between Cobham and Gruber; Gruber virtually puts the reader in the cafe, the nightclub, or in the car alongside him and Cobham. There are so many fantastic stories and so much musical history, that one wonders what didn’t make it into this book! Nevertheless, this isn’t a book just for drummers and jazz fans, (although they will love it too); The stories of Cobham’s journey, his relationships with some of the greatest musical geniuses of our era, are at times both breathtaking and inspiring. Cobham’s ability to poignantly convey them, and Gruber’s ability to precisely capture them are just a few of the things that makes this book so special.

Many of Cobham’s fellow musicians are also to be found in Gruber’s book, offering their own anecdotes and thoughts. Guy Barker, the legendary British bandleader who worked with Cobham for these performances has his own colorful past; Brilliant perspectives on working with musicians, arranging their material, rehearsing, and more; Bassist Ron Carter gives many candid accounts; keyboardist and fellow Mahavishnu Orchestra alum Jan Hammer is interviewed; Trumpeter Randy Brecker, one of Cobham’s oldest friends and member of some of his greatest groups; Drummer Bill Bruford and many, many more.

Gruber doesn’t stop there, as interviews with Cobham’s bandmates both past and present abound. From guitarists Carl Orr and Jean-Marie Ecay; Bassist Mike Mondesir and his drumming brother Mark; Keyboardist Steve Hamilton, (who previous toured extensively in the aforementioned Bruford’s Earthworks group). All of these musicians and more, offer not only their feelings about working with Cobham, but reveal to Gruber their own amazing journey and rise to musical prominence.

I first saw Cobham as a teenager with the Mahavishnu Orchestra beginning in 1973, and since that time, with everyone from George Duke, John Scofield, Alphonso Johnson, Larry Coryell, the Brecker Brothers, Stanley Clarke, Peter Gabriel, Bob Weir, (to name just a few), and dozens of his solo groups; from the Art of  Four, Paradox, Spectrum 40, to his latest Crosswinds Project. Despite being a fan for that long, Gruber’s book was filled with tales I’d never heard before, written with a freshness and candor not found in anything I’ve ever read about Cobham before.

Brian Gruber’s “Six Days at Ronnie Scott’s: Billy Cobham on Jazz Fusion and the Act of Creation”, will certainly stand the test of time alongside some of the greatest tomes ever penned about jazz musicians, and unparalleled when it comes to one of the greatest drummer of this or any era, Billy Cobham.

E.”Doc” Smith is a musician, producer and recording artist with Edgetone Records, who has worked with the likes of Brian Eno, Madonna, Mickey Hart and many others. He is also the inventor of the musical instrument, the Drummstick and makes his home in San Francisco.