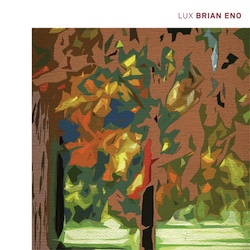 LUX is Brian Eno’s first solo album on Warp Records and his first solo album since 2005’s Another Day On Earth. It finds him expanding upon the types of themes and sonic textures that were present on such classic albums as Music For Films, Music For Airports and Apollo: Atmospheres and Soundtracks. Eno sees it as a continuation of his ‘Music for Thinking’ project that includes Discreet Music (1975) and Neroli (1993).

LUX is one of Eno’s most ambitious works to date; it is a 75-minute composition in twelve sections that evolved from a work currently housed in the Great Gallery of the Palace of Venaria in Turin, Italy. The album is Eno’s third for Warp, following two collaborative albums Small Craft on a Milk Sea (with Jon Hopkins and Leo Abrahams) and Drums Between The Bells (with Rick Holland).

Pitchfork’s Mark Richardson wrote that Eno’s new album, “was first created for an art installation… Lux consists of four tracks spread across 75 minutes, but you don’t really know where one ends and another begins and it doesn’t matter. Like Eno’s earlier works, a small number of sounds that complement each other are set loose in a space and allowed to move around in different configurations, with subtle patterns sometimes emerging from the randomness. The most prominent of these sounds is single piano notes played quietly, which further connects the work to Thursday Afternoon in the Eno lineage. But where the 1985 album felt submerged and ghostly, Lux is clear and bright, with the crisp higher harmonics allowed to come through…”