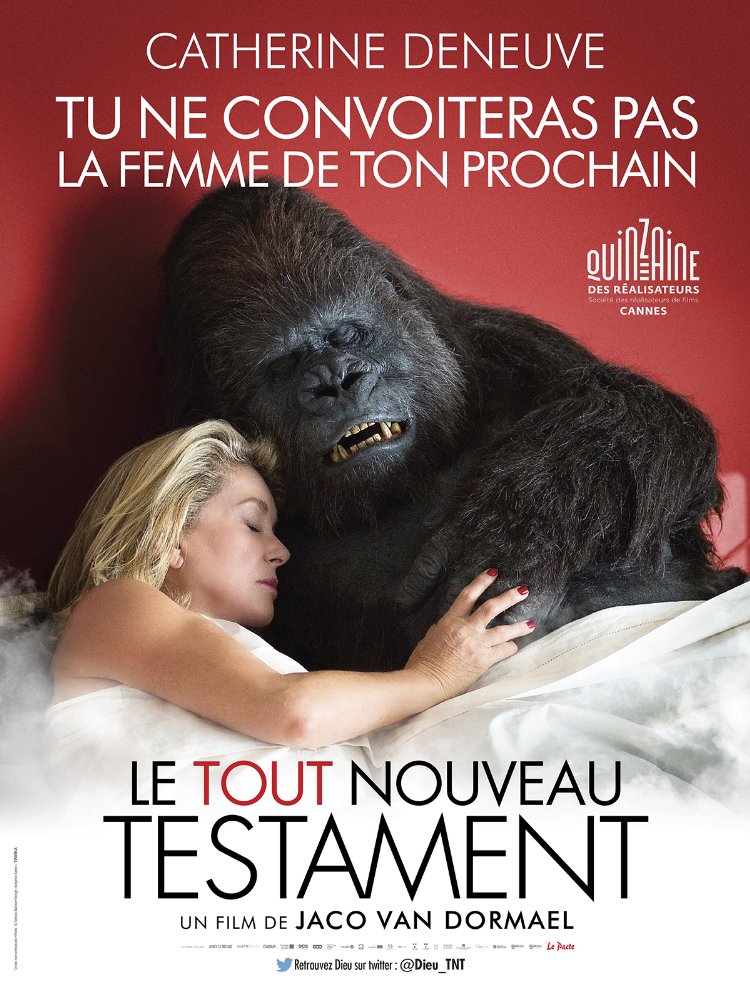 “God is a malign thug.”  This was award-winning fantasist Harlan Ellison’s summation of a point once made by revered American writer Mark Twain.  Wars, hunger, racism, religious intolerance, and glorified income inequality are some of the ills that have continually afflicted humanity.  A reasonable person taking note of all these ills would come to the conclusion that The Almighty delighted in inflicting such troubles on His creations.

The God of Jaco Van Dormael’s new film “The Brand New Testament” lives down to the malign thug label.  From His skyscraper apartment in Brussels, He relishes creating hardship and harassment for the humans He created.  Everything from fatal train crashes to having other lines move faster than yours are just a couple of the ills He enjoys inflicting on helpless humanity for His amusement.

Van Dormael’s portrait of God delivers plenty of arsenic bon bons to counteract the bad taste of this holiday season’s commercialized treacle.  Its scabrousness and irreverence is matched by such never in American film moments as seeing legendary actress Catherine Deneuve in bed with a gorilla.

For readers who haven’t started screeching that their Christianity is being openly disrespected, they’ll scream after hearing the film’s setup.  God (Benoit Poelvoorde) exists. He lives in Brussels, but is an utter bastard to humanity and His family.  Thanks to His all-powerful personal computer, the deity happily visits pointless destruction and petty harassments on the human race.  At home, He bullies His wife into cowed submission.  His 10-year-old daughter Ea (Pili Groyne) receives His threats and worse.

After God viciously beats Ea, she decides to strike back at her father.  Her sabotage of God’s computer informs every person on Earth how much time they have left to live.  After escaping from the apartment, she sets out to do a better job than her dad. Ea plans a brand New Testament with the words of six randomly chosen apostles.  The extremely furious God pursues His daughter, as her mass data leak robbed Him of His greatest weapon for intimidating humanity.

Van Dormael’s premise is not that outlandish.  Humanity being treated as the plaything of amoral gods has been a theme of classic Greek mythology.  What’s different is that “The Brand New Testament” doesn’t give the Christian/Islamic god a pass from exhibiting the maliciousness other gods have visited upon unwary humans.  This God has no higher plan other than controlling the universe through fear.

Ironically, this celestial bully and His family have far less power than claimed.  Without access to His celestial computer, He’s just a loud-mouthed a-hole.  His wife limits her powers to keeping the household supplied with food and beer.  Ea can move milk glasses with her mind and identify the theme music of a person’s life in their heartbeat.

The film’s God well-deserves the ridicule that accompanies His depowering.  Seeing a beer-bellied jerk running through the streets of Brussels in bathrobe and sandals doesn’t inspire awe or fear.   God’s sense of entitlement and arrogance hilariously gets whittled by His getting mace sprayed in His face and receiving a beatdown for attempting to jump a line.  The best comeuppance comes courtesy of a kindly priest who realizes that his alleged Lord and Savior enjoyed the tragedies of his life.

Another strong aspect of “The Brand New Testament” is its finding often dark comedy in humanity’s varied reactions to learning about their death dates.  A woman in a bathtub mounts a darkly fruitless attempt to avoid her demise.  The longest-living man decides to party as if there’s no tomorrow.  A running joke involves Kevin, whose life-threatening stunts end in highly improbable rescues.

Through the individual life stories of Ea’s apostles, the film considers the plights of those who won’t die in a short while yet do not have decades of life awaiting them.  Do they still do what they have done before until they have only a few years left?  Or should they just abandon their old life completely and use their remaining time on Earth to build an utterly new life?

The film does ignore the reality that not every human being in the world has a text message-ready device handy.  Ea sends out the notifications of death dates as text messages.  How do relationships change between people when some people know when they will die while others remain ignorant?  The homeless Victor’s admitting he never received the death text is not the same as dealing with this issue.

But the bigger implication of the film’s premise doesn’t get dealt with at all.  If humanity’s hardships aren’t a piece in some complicated celestial plan, then how should humanity handle the hardships in their lives?

Ea’s apostles could have answered this question indirectly through their recounting of personal experiences that set them apart from more respectable members of society.  Their numbers include the beautiful one-armed Aurelie, sex obsessive Marc, and Willy, the boy who wants to dress as a girl.

Yet “The Brand New Testament” winds up favoring sentiment over a deeper satirical bite.  The stories of these apostles’ lives never feel like a rebuke to the cautious terror that God nurtured in humanity.  Martine’s affair with the gorilla, for example, is less about glorifying bestiality than in her finally finding someone who truly loves her.  Niceness may bestow on a film the reward of audience popularity.  Yet if a filmmaker wants to have their work appreciated by audiences other than their immediate contemporaries, they have to be willing to risk enraging an audience.  Van Dormael’s film ultimately displays a failure of aesthetic nerve.

This doesn’t mean “The Brand New Testament” is utterly without merit.  The film would fit perfectly into the schedule of a future San Francisco Atheist Film Festival.  But its crowd-pleasing sacrilege will be instantly forgettable on exiting the theater.

(“The Brand New Testament” opens on December 16, 2016 at the Opera Plaza Cinemas (601 Van Ness, SF) and the Shattuck Cinemas (2230 Shattuck, Berkeley).  For further information about the film, go to www.musicboxfilms.com/the-brand-new-testament-movies-143.php .)