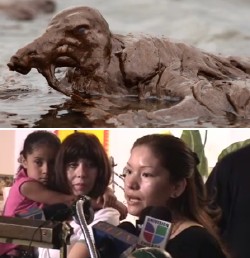 President Obama’s first Oval Office speech tonight addresses the disastrous BP oil spill, which has dominated the news for weeks. The event will show that Obama is on top of the situation, and he will unveil a plan to require BP to create an estimated $7.5 billion escrow fund for compensating victims. But the contrast in the public’s and government’s response to the oil spill and the immigration crisis highlighted by Arizona’s recent anti-Latino bill is striking. The arrest and/or deportation of hard-working immigrants never spawned the broad moral outrage that accompanied the New York Times photo of an oil-soaked pelican. This outrage demanded immediate action to solve the spill, while the drive for comprehensive immigration reform has stalled, with President Obama under little pressure to act.

The BP oil spill could become the worst environmental calamity in United States history. Even Sarah Palin has urged more government regulation of drilling, though she also praises Rand Paul for his libertarian views criticizing government intrusiveness on private business.

It’s no surprise that images of oil soaked pelicans and fish has aroused worldwide outrage. And that the plight of newly unemployed fishermen, and the destruction of local fishing economies, has given the tragedy an extraordinarily sympathetic human face.

But wasn’t it just four years ago that people across the nation were moved by massive street marches and stories of the break-up of immigrant families, and the often illegal deportations of longtime U.S. residents? Didn’t our country’s political leadership in 2006 pledge to solve this daily crisis faced by millions of undocumented immigrants, a commitment that Barack Obama adopted during his presidential campaign?

Unfortunately, inaction can diminish a sense of crisis. Inaction is not politically viable when thousands of barrels of oil are rushing into the Gulf of Mexico, but the ongoing failure to meaningfully address issues like immigrant rights and homelessness can diminish public outrage, leaving activists isolated in seeing an unacceptable status quo (since the foreclosure crisis, the shocking rise in the number of homeless families nationally is a non-story, as is the millions lacking affordable rental housing).

That’s why the Obama Administration felt no obligation to act after Arizona passed its anti-Latino law despite pressure raised by immigrant rights activists. And when Obama did act, it was to send 1200 National Guard troops to the border, which led him to be further criticized by the Center for Community Change and its network of immigrant rights groups.

Neither civil disobedience, nor the Arizona boycott, has convinced the broader public that resolving the plight of millions of undocumented immigrants is a moral imperative.

And given polls showing majority support for the Arizona law, activists will not get politicians to vote for comprehensive reform until a new, broader organizing drive translates the cause into a moral issue.

I think SEIU and other reform backers believe that strong Latino turnouts in November, particularly if it saves the Nevada Senate seat of Harry Reid, will change the current political dynamic. But increased Latino voting in 2006 and 2008 has not improved the prospects for comprehensive reform.

In my book on the ongoing legacy of the United Farm Workers, I describe how Latino electoral outreach strategies pioneered by the UFW helped decide a key congressional battle in Colorado in 2006 where immigration reform was the top issue. Also in 2006, Arizona Congressmember J. D. Hayworth was also defeated due to his strong anti-immigrant views.

Yet increased Latino voting that ousted Republican congressional incumbents in 2006 did not broaden Congressional support for immigration reform in 2007 or 2008. Nor did a massive Latino vote for Obama and other Democrats in 2008 improve the climate in the current Congress.

I have no doubt that Latinos will be taking out their anger at anti-immigrant Republicans at the polls in November. And they will make California’s Meg Whitman rue the millions she spent during the primary on sweeping anti-immigrant radio ads.

But just as Hayworth’s defeat did not stop Arizona Republicans and John McCain from moving sharply right on immigration, record Latino voting in 2010 is not alone sufficient to pressure the next Congress to pass comprehensive reform.

That requires the reframing of immigration reform as a moral imperative, and new grassroots organizing to emotionally connect non-Latinos across the nation to the cause. That’s how the UFW build a broad movement in the 1960’s and 1970’s, as Cesar Chavez understood that farmworkers needed to build support beyond the Central Valley.

It would be great if Latino election turnout in 2010 could ensure reform, but as legendary organizer Fred Ross Sr. put it, “short-cuts usually end in detours which lead to dead ends.” The oil spill has submerged immigration reform for now, but the contrasting response to the two issues shows that there is no short-cut to undertaking the nationwide organizing essential to winning comprehensive reform next year.