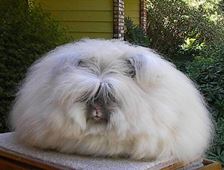 It would be dishonest of me to say that I recommend watching PETA Asia’s video exposing the barbaric methods employed by Chinese laborers in the manufacture of angora fabrics. Even by the standards of animal cruelty investigative videos, PETA Asia’s footage is hard to watch. If you’re not prepared to see it for yourself, allow this description to suffice: bunny rabbits are shown strapped to boards, having their fur torn out at the roots by hand until they’re bald, screaming throughout the entire agonizing process. Then they’re thrown into solitary cages where they live out their short, miserable lives, going through the same torture every two months until their throats are finally slit.

The good news is that if you want to take a step toward ending these horrific practices, watching the video isn’t the most important thing you can do. The important thing is to do is this: boycott angora.

I live with two pet bunny rabbits, so my sympathy for the species is personal. Here’s what I know from my experience: Rabbits are highly social creatures, with much more distinct and idiosyncratic personalities than most people would expect. They crave affection, from each other and from their human companions. They experience pain and fear. And under normal circumstances, they never, ever scream.

It’s easy enough to blame China, from which 90 percent of the world’s angora fur is sourced, for the horrors visited upon angora rabbits and other domesticated animals at their end of the industrial supply chain (and even easier to ignore what takes place at ours). As in the United States at the turn of the 20th century and England in the late 1800s, the breakneck pace of Chinese industrialization has generated both enormous wealth and massive poverty and desperation. It’s a society in a stage of anarchic capitalism. Just as there are few labor protections in China for capitalism’s human victims, there are no animal welfare rules whatsoever.

But pointing the finger solely at China elides the fact that it’s Americans whose purchasing habits are being served by this cruelty. Angora sweaters may end up on store shelves in a few high-end retail outlets in Shanghai and Hong Kong, but for the most part, they’re headed to your local J. Crew store. Angora fabrics are being made for the luxury tastes of American consumers and the profits of American retailers.

That doesn’t just put the moral responsibility back on us — it also puts us in a position to demand change.

We can no more write new Chinese laws to curtail these abuses than we can enter Chinese factories and release suffering rabbits from their cages. But we can do one thing to make a difference, right this minute: Boycott angora.