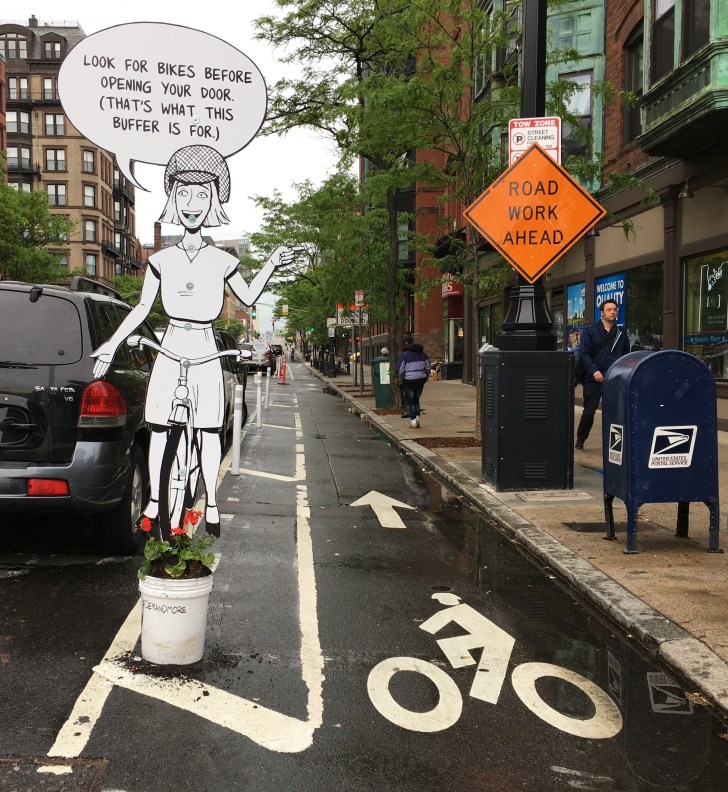 Comic characters in Boston's bike lanes remind drivers (and the mayor) that more can be done to improve safety. Photo: Jonathan Fertig

Last night, volunteers installed eight large black-and-white comic cutouts, printed on waterproof boards and mounted on metal poles, in buckets filled with concrete and flowers. They dropped the comics into the buffers of protected bike lanes along a few blocks of Massachusetts Avenue and Beacon Street.

In one, Irish-American step dancer Michael Flatley tells drivers to “keep this area clear for swinging doors and my swinging legs!” Another features a woman on a bicycle telling drivers to “look for bikes before opening your door.” A third features a “parking coach” with a whistle around his neck, yelling, “Line it up, people!”

“Introducing some whimsy to the street is just one strategy. It’s about expressing my displeasure with how we treat the streets now,” said Jonathan Fertig, an architect who came up with the project.

“I wanted something that was quirky and random and came from a place of absurdity, rather than a place of anger,” said Bekka Wright, who collaborated with Fertig and drew the characters in the style of her web comic, Bikeyface.

The city has installed flexible plastic bollards along the bike lanes, which did not initially have the barriers. But Fertig and Wright say the flex-posts went missing on Massachusetts Avenue over the winter, and the bike lane filled up with snow and parked cars.

Wright wants to see the city pick up its pace and install more high-quality protected bike lanes. “It’s gonna take hundreds of years for Boston to actually have a bike network,” she said. “I know things take time, but they need to go a little faster.”

Fertig began working on the project in his spare time last fall. After a radio interview last week in which Walsh blamed the victims of car crashes for getting injured, he felt compelled to go live with the intervention.

“Pedestrians need to put their head up when they’re walking down the street, take your headphones off… you’ve got to understand, cars are going to hit you,” Walsh told WGBH, two weeks after a cyclist was killed by a hit-and-run driver. “People need to be more cognizant of the fact that a car is a car. Even bicyclists, when you’re riding; a car can’t stop on a dime.”

Boston’s advocacy groups for walking and biking welcomed the intervention.

“We think the timing of this is great, and the tone is one that we wish was promulgated more widely on our streets,” said Boston Cyclists Union Executive Director Becca Wolfson. “Rather than fuel animosity, we hope that both drivers and the city — especially Mayor Walsh — can see that while the issue of safety on our streets is a serious one, we can approach it with some lightness, compassion and come together to work towards the same goal.”

“We do typically see these [street interventions] when the public is pushing back against officials when they’re dismayed at the slow rate of change,” said Andrew McFarland, community engagement manager for the Livable Streets Alliance. “Let’s ask more of our city officials. Let’s not wait around for another crash to take another life.”

Fertig is no stranger to bike lane interventions. Nearly two years ago, he began installing flowers and traffic cones to keep drivers out of the Massachusetts Avenue bike lane. This time around, he doesn’t expect the comics to stay on the street very long.

“As these interventions have gained a little bit more notoriety, the city has more recently removed them a little more quickly,” Fertig said. “I’m really a thorn in their side.”

Does he have ideas in mind for his next intervention?

“I really love seeing this growing movement of people using toilet plungers. That’s a really fun one,” Fertig said, referring to plunger-protected bike lanes in Wichita, Providence and Omaha. “I’ve considered placing a bulk order for some plungers at some point.”

Updated:  “We appreciate the intent of the cartoon cutouts to inform and educate people about bike safety on Massachusetts Avenue in an artistic, eye-catching manner,” said the Boston Transportation Department, which added that the city will be removing the comics. “We agree that it is beneficial to circulate these important messages and we are working each day to further enhance our streets so that they are safe and welcoming for all users. On Massachusetts Avenue, in particular, additional flex posts will soon be placed along the existing bike lane.”