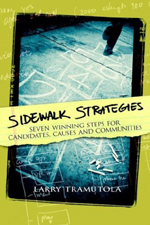 After graduating college, Larry Tramutola began volunteering on the lettuce boycott called by the emerging United Farmworkers Union. Tramutola spent hours each day in front of supermarkets signing up volunteers, but soon found that most of the signers failed to show up. Tired of working long hours with little results, a discouraged Tramutola attended a meeting where he met the legendary organizer, Fred Ross. Larry told Ross about his experience and said that it seemed he wasn’t very good at the work. Ross replied, “You’re right. It’s hard work and you obviously don’t know what you’re doing.”

Many would have given up organizing after that exchange but Tramutola told Ross he was willing to do what it took to learn the tools of the organizing trade. Ross had recruited and trained a young Chicano named Cesar Chavez and pioneered the now standard organizing tactic of establishing relationships through house meetings. Ross was a keen judge of talent and saw something in Larry that sparked his interest.

Ross met with Tramutola and told him to write down everything he had to do the next day. This included who Larry was to meet with, the times he would make his first and last reminder calls, and every other detail Tramutola or Ross felt relevant to the business of organizing. Two hours later, with pages of butcher paper filled, Ross told Tramutola that he would review the young organizer’s work from 9-11pm every day for the next six months.

Imagine having the opportunity to have your work evaluated daily by perhaps the greatest organizing mind of the 20th Century. It sounds great, but Ross did not suffer fools gladly. He did not mince words when pointing out Tramutola’s errors, and Larry took to describing his talks with Ross as a nightly “Inquisition.” Still, after the six months Tramutola became such a successful organizer that he never lost a UFW election.

After leaving the UFW, Tramutola assembled the legendary field campaign for the victorious 1987 Agnos mayoral effort. He went on to become the state’s leading campaign manager for campaigns by cities and school districts needing 66% voter approval for infrastructure improvements.

Ross never got around to finishing his own book, so it is fortunate that much of the wisdom Tramutola gained from Ross is available in Sidewalk Strategies. The book is organized around Tramutola’s “7 winning steps:” working for what you believe in (rarely a problem for progressives), developing discipline (a huge problem), knowing how to win, listening, defining the debate, investing in people, and the willingness to keep working, win or lose. Tramutola exhibits the meaning of these steps through discussions of specific campaigns.

Most of these campaigns are electoral. The book is a treasure trove of ideas for potential candidates, and should be a must read for all those running for supervisor this year. The book also discusses strategies for initiative campaigns, most of which involve bonds for school improvements.

The greatest strength of the book is its focus on the importance of discipline and accountability. These issues run through nearly all of the author’s seven steps, and are central to the organizing philosophy of both Tramutola and his mentor, Fred Ross.

Tramutola’s approach is clear. He believes that organizers must leave as little as possible to chance. If you need fifty people to show up at a meeting, the organizer must call people over and over again until they are sure to attend. In Tramutola’s book, there are no excuses for not getting meeting turnout or not getting volunteers to follow through-such failures are the organizers fault. It is all about accountability.

For Tramutola, creating social change is a serious business. When he ran Agnos’s field campaign it was rare to see anyone simply hanging around the headquarters or otherwise not engaged in productive work. Larry felt it sent the wrong message for folks to be sitting around, as it implied that the campaign had time to squander. A campaign that acts as if every minute counts identifies far more voters, and has the discipline necessary to win.

During campaigns, Tramutola starts each day with a staff meeting where people go around the room describing what they did the previous day. This is a receipe for accountability, because nobody wants to tell their fellow staff that they spent the day in a cafe rather than building the campaign. It is also a receipe for generating hostility from those called to account for their poor performance. Sad to say, but many activists feel as if having good politics is sufficient, and if they don’t get much done, well, that’s how it goes. Such an attitude does not win elections against the big money opponents activists typically face.

As I read Sidewalk Strategies I found myself saying over and over-“I really wish people who do organizing in San Francisco would read this book.” Now that you know about it, read it.

Randy Shaw is the editor of Beyond Chron and author of The Activist’s Handbook.