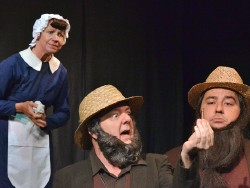 A WILD AND TART RIDE

This is a quirky story about The Amish. They are known for their marvelous cheese balls made by the daft and goofy Liz (Marie McDonnell). The problem with Liz is that she is just too liberal for the Bearded and not bearded Amish. The slapstick gets off to a slow start – but then all of a sudden, the Amish Wagon takes off like they were off to see the Grand Wizard.

Liz leaves the Amish Camp – because a pompous Ass, “Brother Brightbee” (Tavis Kammet) is a control freak that thinks he can walk on water. Brightbee demands that Liz gives up her ‘Cheese Balls’ formula to him. Problem is, he can’t make them right and the Amish depend on those “Balls” to sell to tourists. Their little camp is famed for them. The “Cheese Balls”, that is.

Yes, Liz has left the camp and meets up with a couple that are consistently entertaining. One is known as Mr. Peanut. You’ll find out why. What fun. The entire play is bright and charming. This fairy tale just rips along with lightening speed, with one laugh after another.

Liz, who made the famous Cheese Balls, finds a waitress job through her friends. At first they like her at the restaurant, but the management wants her to dress a little more modern. The Amish look is just a little to “mish” for the Restaurant owner. In a twisty way, Liz is funny and sometimes bittersweet. Just like her cheese balls, I assume.

This very off-center human comedy is a pure pleaser to experience. Can anyone sing “Horse and Buggy?” If so, this is the ride for you. Rejoice – it’s a prayer meeting of hundreds. Well, not really – but for four people in the cast, they do seem to multiply.

There are several blackouts for the many quick costume changes. Just like the Energizer Bunny – they just keep going and going in the little village of Cluster Haven. And you’ll just roll over as Liz is kicked out of the annual Chastity Parade float. Liz apparently was kicked out because of not following the theme of the Parade — that would be the float “Dangers of casual glancing”. OMG … not that! Liz must leave immediately. She glanced too many times.

“The Book of Liz is sheer irreverent entertainment, and is groundbreaking and Ballsy.

The Director: Gabriel A. Ross has given us a little slice of Heaven. It’s an utter blast! At the Gough Street Playhouse — 1620 Gough Street (at Bush). http://www.custommade.org/.

BILLY ELLIOT COMPANY MEMBERS of the smash hit musical at the Orpheum are giving up their time for a smashing evening of entertainment for the “One Night Only” Benefit Cabaret at the Marines Memorial Theatre. You’re going to really enjoy this evening of the cast with Tony Award winner Faith Prince and John Lloyd Young (Tony Award Winner) for his role in “Jersey Boys” musical. Plus Cabaret Stars Shawn Ryan of “America’s Got Talent” fame and Wesla Whitfield, known for her wonderful voice, will also entrance. It all takes place at the wonderful Marines Memorial Theater on July 31, 2011.

At this exclusive evening of fun, song and dance the cast members of Billy Elliot will perform song selections of their own choice in the evening of high-energy music.

The Richmond/Ermet AIDS Foundation has worked with over 33 touring casts to date, to produce “One Night Only Cabaret” events. To date REAF has distributed well over $2.5 million to AIDS service agencies. This is a perfect date evening of fun, frolic and singing. It’s also a surprisingly sweet evening, that’s sure to win your heart! Info and Tix: http://www.helpisontheway.org/

Billy Elliot the musical is still playing at the Orpheum Theatre in SF to August 17, 2011.

Bergl was recently at San Francisco’s Rrazz Room where like a visual masterpiece she gave a performance that deserves to put her at the top of the best actress/singer list. Bergl is a world famed actress (Desperate Housewives), star of Broadway, film and now she will wow the Great White Way in New York with her Cabaret show “Kidding on the Square.” You want your heart broken? She can do that when she sings “Ten Cents A Dance.” Or how about Roy Orbison’s “Crying.” Want more? Here’s the Dietz & Schwartz song “I’ll Guess I’ll Have to Change My Plan.” The Algonquin show will run through September 10th. Sarna Lupine will direct and the Mega Popular G. Scott Lacy will be the musical director and pianist. You’re gonna love it when Bergl and Lacy team up on a couple of songs–it’s like floating on air. Visiting New York? You really should see this show…Bergl, “Breaks the mold.” The Algonquin Hotel is between Fifth and Sixty Avenues in New York. http://www.alqonquinhotel.com/

And that’s a Wrap!