Board Set to Vote On Legislation to Reduce Evictions 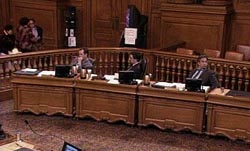 The Board of Supervisors will vote tomorrow on two proposals aimed at decreasing the number of ‘bad’ evictions – evictions that displace seniors, disabled and low-income people – by increasing public notice and government oversight of the eviction process. While both pieces of legislation possess broad support among tenant advocate groups and open government activists, as well as the almost unanimous support of the Planning Commission, their chances of final approval remain uncertain. Mayor’s Office of Housing head Matt Franklin testified at a recent Land Use hearing against the proposals, signaling that unless the Board passes both with a veto-proof eight votes, Mayor Gavin Newsom may refuse to sign them into law. The possibility of getting those eight votes remains open, setting the stage for what could be a dramatic Board meeting.

Of the two proposals, the second to be heard is less contentious, and stands the best chance of obtaining eight votes. This legislation would force those trying to sell buildings where ‘bad’ evictions occur to notify potential buyers earlier in the home-buying process. Currently, buyers don’t find out until the final stages of their purchase, making it hard to pull out once its discovered it became available at a vulnerable tenant’s expense.

Everyone from the Tenant’s Union to Plan C supports the proposal, as it works both as a consumer protection by providing homebuyers with more information about their purchase, as well as a way to decrease ‘bad’ evictions by slowing down the sale of buildings where such evictions occur (as recent information picketing of houses where bad evictions occurred have shown, San Franciscans are far less willing to even consider purchasing a home if the find out a senior or disabled person was evicted from it).

Surprisingly, however, Franklin opposed the common sense measure, claiming that the lack of a consumer advocacy group arguing for the legislation rendered it inconsequential. Whether his position translates into a mayoral veto should it pass remains to be seen, but Franklin’s position could influence those that traditionally vote with the Mayor, including Supervisors Fiona Ma, Bevan Dufty, Michela Alioto-Pier and Sean Elsbernd.

Because the legislation is ultimately not that contentious, it appears likely that at least one of these four will vote for it, providing the eighth vote that would ensure it becomes law.

The other legislation faces a tougher road. The measure would inject more city oversight and public input into the condo conversion process by forcing the Planning Commission to hold hearings on conversion applications for buildings with 2 to 4 units. If passed, the legislation could have far-reaching implications, as it would encourage the city to start enforcing a previously ignored 24-year-old law that prevents condo conversions in buildings where bad evictions occurred.

As it currently stands, when property owners wish to convert their building from rental units into condos, they must submit an application to the city. Buildings of 5 units or more get subjected to a hearing at the Planning Commission, where they routinely get approved.

The hearings serve the important function of notifying the public and tenant groups of an impending conversion. Interested parties can then air concerns about the conversion before the Commission. Because hearings aren’t held on buildings with between 2 and 4 units, the applications often remain unknown to the public until late in the process.

Tomorrow’s legislation would not only force hearings to be held on small buildings, it would also specify what the Commission should pay attention to when reviewing applications for conversion. In addition to the usual concerns, including the application’s consistency with the city’s General Plan and environmental findings, commissioners would be required to address the conversion’s accordance to Subdivision Code Section 1386.

This section of the code specifically states that Planning must turn down requests for subdivisions of buildings where a member of the protected class of tenants – seniors, disabled, and chronically ill people – get evicted. According to tenant advocates, 79 percent of the buildings where Ellis Act evictions occur include a protected tenant.

Because this legislation might decrease the number of Tenancy in Common conversions possible in the city – conversions some Supervisors and Newsom have fought to increase any way they can – it faces strong opposition from those on the Board allied with the Mayor.

Obtaining eight votes will likely hinge upon Dufty, who represents District 8, where the highest number of evictions of people with AIDS have occurred. Should the legislation fail to gain eight votes, it remains almost certain Newsom would kill it once it reaches his desk. Tenant advocates, however, remain hopeful that both proposals will pass.

“Both pieces are largely good government, open government proposals,” said Tenant’s Union head Ted Gullicksen. “Hopefully, tomorrow the Supervisors will stand up against eviction and approve the legislation, rather than supporting evictions and voting it down.”