Board of Supervisors to Consider Parkmerced CEQA Appeal 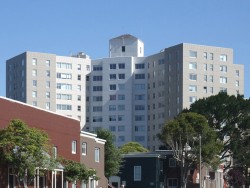 The fate of thousands of tenants at Parkmerced is now in the hands of the San Francisco Board of Supervisors. Today, the Board will hear appeals of the Environmental Impact Report (EIR) narrowly approved by the Planning Commission on a 4-3 vote. If the EIR is approved, the board will next consider, at future hearings, whether to approve the re-zoning of Parkmerced and the proposed Development Agreement.

The project is fundamentally flawed. Under the banner of “smart growth,” the developer and the Mayor’s Office of Economic & Workforce Development (the two are indistinguishable when it comes to this project) are applying infill development principals designed for vacant and abandoned land to the demolition and reconstruction of an occupied community of working class San Franciscans. If they have their way, they will bulldoze over 1500 homes. The Board must stop this madness.

The only reason this plan is even being considered is because it is destroying the homes of working class renters, not homeowners.

Imagine a proposal to take 152 acres of San Francisco’s Sunset District (or any other neighborhood) and increase density and transit by bulldozing 1500 single-family homes or duplexes to make way for new larger buildings as part of a 20 or 30-year construction project. The developer would be chased out of San Francisco, and any politician that aligned himself/herself with the project would be recalled.

Project backers will argue that the city will derive tax revenue and MUNI investments from the project. This is reminiscent of the justification used by the U.S. Supreme court in the wildly unpopular Kelo v. City of New London case. In that case, the Court upheld a city’s use of eminent domain power to acquire homes for private development on the theory that the increased tax base provided a sufficient public benefit to justify the use of eminent domain.

The Parkmerced proposal is similar, except that it is tenants whose homes are to be seized. Tenants would be forced to endure 20 or 30 years of construction, displacement from their current homes, and serious risk that the promised “replacement housing” will never materialize, all so that the City can, in theory, increase its tax base with fantasy $800,000 high-rise condos at Parkmerced.

Today, the issue before the board is the sufficiency of the EIR. Here’s a quick guide to some of the major housing-related flaws of the EIR:

2. The EIR fails to identify how long the project will take. At times in the EIR, the estimate is 20 years, and then at other times, the estimate is 30 years. In assessing a broad range of environmental impacts, a ten-year difference in the project description is significant.

3. The EIR contains no timeline for the various stages of construction. As noted by the Planning Department in a memo to the Planning Commission, “unlike other recently approved development agreements, under the terms of this Development Agreement, the Developer is not required to maintain any development schedules or pre‐determined physical development phases.” Without any guidelines as to when demolition and rebuilding will occur, the project impacts cannot be sufficiently analyzed.

4. The EIR fails to adequately address the displacement of thousands of residents. Instead, the EIR apparently adopts the position that tenants will be re-housed and therefore are not “displaced,” a position that is wrong legally (being relocated to a different unit is displacement under state and local law) and practically (there are serious risks that replacement rent control promises will never materialize). Other errors flow from this, including the failure to include state mandated relocation payments as part of the mitigation measures for tenants being displaced.

5. The EIR counts construction of new units as a “benefit” but does not count the demolition of over 1500 rent controlled units as a significant impact. This massive demolition has impacts that must be analyzed in the EIR, and any benefits analysis must be offset by the loss of existing units.

6. The EIR fails to analyze the Development Agreement (DA) in the project description. As argued by attorney Mary Miles in a recent comment letter, the “City proposes to enter into a development agreement that improperly delegates responsibility for mitigating the Project’s impacts to the developer with no public oversight.”

There are many other issues relating to seismic safety, gas lines, traffic, parking, historical significance, etc. that have been raised in the various appeals of this EIR and the comments submitted by the public.

For those who are interested in these issues, be sure to attend or watch the EIR hearing today at 4:00 p.m. at San Francisco City Hall.