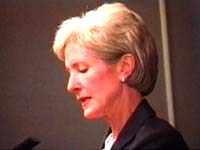 When you mix blue and red you get purple. That’s what happened Tuesday. As the dust settles from election night celebrations, the national landscape resembles less and less the neatly divided, easily distinguishable blue and red political map so many folks have come to accept as the normal, polarized state of the nation. Instead, everything is a muddy purple. The extreme right has been reminded, finally, that it is, in fact, extreme. Blue-tinged thinking has bled into traditional red-state areas like Montana and Virginia. And nowhere is all this more evident than Kansas, a state some folks call the very heart of the heartland. During the Newt Gingerich-filled days of the 90s, for instance, Democrats were happy (and felt lucky) to have one nationally elected official from Kansas. But after Tuesday night, half the state’s delegation to the US House of Representatives is Democratic, along with the Governor, the Attorney General and a host of other state-wide positions that the Dems picked up. Not bad for a state where only 26 percent of voters are registered Democrats. So what happened here in the Sunflower state? And what does it mean for Kansans? For Americans?

For starters, what happened in Kansas is that the Democrats won three of the four “important” elections previewed last week in this column. Nancy Boyda upset five-time incumbent Republican Jim Ryun, formerly one of the most conservative members of the house, in a race that the national Democratic Party (along with the Kansas City Star and other local media) had all but given up on in September.

But by last weekend, not even Bush’s last ditch effort to shore up Ryun’s campaign with a stop in Topeka on Sunday could save this far-right legislator. Todd Tiahrt, another far-right Kansas representative, however, held onto his seat by thirty percentage points in a race that was more or less over from the beginning, thanks to GOP gerrymandering in the 90s.

Statewide, the Democrats maintained (as expected) control of the governor’s mansion: Sebelius swept past her GOP challenger by twenty points—a margin of victory that signified just how strong the Democratic showing was on Tuesday. Most importantly, the ideologically-driven hack who has occupied the Attorney General’s office for the past three years, Phill Kline, was soundly defeated by former Republican Paul Morrison. Surprisingly, in a race that most pundits thought would come down to the wire, Morrison took the win by nearly twenty percentage points.

What this all means, perhaps, may be the more pertinent question. For Kansas, it means that the state where the first woman mayor in America was elected in 1887 is again, strangely, leading progressive change, in spite of its redneck reputation. Kansas now has a woman representative (Boyda), as well as a female governor. And with Ryun and Kline gone, Kansans in favor of allowing women the right to an abortion can breathe a sigh of relief. More generally, however, the moderates of Kansas have reclaimed the political megaphone—and this election, most of all, signals a move to the center.

Sebelius, speaking after the election, agreed: “It’s important not to be red and blue states any longer, but really focus on issues that connect with citizens across this country.” Connecting with citizens by talking about issues they care about is exactly what Sebelius said would be key to Democratic victory before the election—issues like healthcare, education and poverty, as opposed to evolution, abortion rights and gay marriage.

What unfolded Tuesday night in Kansas, however, fits with the larger Democratic tide that swept the nation. More than anything, Kansans—like voters from Virginia to Montana—were voting in a de facto referendum on the Bush presidency. And on that matter, they spoke loudly and clearly: the unflinching arrogance and blindness of Republicans on issues of congressional corruption and national security, for instance, are no longer acceptable. Because this vote was so tied to the failings of the Bush presidency, the call for change this vote reflects is vague and unformed. In other words, folks are ready for change—and so they voted for whoever was the most un-Bush.

It’s important to understand, therefore, what this Democratic landslide doesn’t mean. It is not, for instance, a “liberal” victory. Though Nancy Pelosi is herself a very progressive representative, she has already ruled out the most left-wing (and to some of us, most appealing) agenda-items, such as the proposed impeachment of George W. Bush, in favor of more centrist policy positions like changing course in Iraq.

Additionally, Democrats who won in traditionally conservative regions of the country were, in many cases, in the conservative wing of the party. Jon Tester in Montana, for example, is a butch-cut farmer who is staunchly opposed to gun control. Bob Casey, the Democrat from Pennsylvania who upset right-winger Rick Santorum, is a committed pro-lifer. In Kansas, Kline’s opponent Morrison is a former Republican. Even Boyda distanced herself from the Democratic party throughout her campaign. This was not, therefore, a victory for the likes of Ralph Nader, Paul Wellstone or Robert Byrd. The left came to the center to win on Tuesday, not the other way around.

Second—and because Democrats had to represent the center in order to clinch Tuesday’s victory—these wins do not mean that progressives in this country are out of the woods. That is to say, this is no time for Democrats to relax, sip martinis or generally act like all is peachy now. In Kansas as well as nationwide, Republicans who finally face the prospect of two-party rule for the first time in several years also have, for the first time in years, someone to blame if policy doesn’t work out. Bush, for instance, can now gleefully attribute his failings to Democratic incompetence or stalling. And since, as previously mentioned, this cry from the center was so undefined, the Democrats have ahead of them the difficult work of putting together cohesive policy alternatives that will give voters in 2008 something to vote for, not just something to vote against.

None of this cautionary talk, however, ought to detract from the feeling that a new morning has dawned in America. Everywhere people who’ve long felt that the Bush administration was growing into an unchecked monster finally feel as if there is something to cheer about. Most telling was the international response. From around the globe, said one European politician interviewed by the BBC, you can hear the world applauding. While there is no doubt real and difficult work ahead of the Democrats—the work of uniting politicians and creating actual change—we can say Amen to the applause.