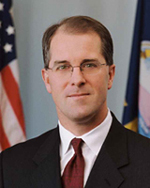 In his 2002 election campaign, Kansas Attorney General Phil Kline accepted a $500 donation from the son of Revered Fred Phelps. The same Fred Phelps who protests the funerals of military personnel, and who shouts “God hates fags!” on street corners—and his son is an active member of the family cult. Kline, of course, is eager to point out that his campaign donated the same amount to a group that works against Phelps. But why would the Phelps family find Kline attractive in the first place? Could it be that Kline’s ideologies and policies parallel the kinds of hateful ideas that the Phelps’s spew on a daily basis? As the most recent Survey USA poll shows Kline ahead of his Democratic opponent by only a 51-48 margin, more and more Kansans find these questions to be both relevant and definitive. Since Kline’s opponent is a former Republican turned fed-up Democrat, Kline’s defeat would represent further evidence of the growing fracture in the Kansas GOP.

Phil Kline is a rabid right-winger even by the standards of Kansas’ right-wing Republican party. He supports the absolute restriction of gay marriage rights state- and nation-wide. He openly opposes Roe v. Wade. He adamantly supports the death penalty. The conservative Christian propaganda hacks at the Family Research Council call him “noble” on their website. And, of course, he’s a born-again Christian. Ken Ciboski, a Wichita State University political science professor says “[Kline] is viewed as being part of the very conservative segment of the party.”

After serving eight years in the Kansas House of Representatives, Kline ran for the U.S. House, opposing long-time incumbent Dennis Moore. His bid to unseat Moore—who represents northeast Kansas, including left-wing bastions like Lawrence—ultimately was unsuccessful. In 2002, however, Kline narrowly defeated Chris Biggs for the Attorney General seat in an election that came down to recounts and a victory margin of less than one percent.

Disgusted with what he calls Kline’s “agenda” over the last four years, Johnson County Attorney General Paul Morrison announced last spring that he would be running against Kline—as a Democrat. Morrison has endured the expected insults from former fellow Republicans, and because of Morrison’s surprising candidacy, the Morrison-Kline race is shaping up to be Kansas’ most exciting political event of 2006, even more so that the Gubernatorial race (Sebelius looks more and more secure everyday).

According to Morrison, as Attorney General, Kline has involved himself in a number of issues that ought to be left up to politicians, not the state’s top law enforcement officer. “Do you want an attorney general who has spent over half his life … prosecuting criminals and effectively putting them away to keep this community safe, or do you want a career politician who has had precious little experience in actual practice of law?” Morrison asked an audience in June.

What is Kline’s agenda? Why was Morrison concerned enough to switch parties?
In March of last year, for instance, Kline subpoenaed the medical records of more than 80 women who received late-term abortions in Kansas in 2003. His office claims the records were necessary to find evidence of child rape and violations of a state law restricting abortions performed after twenty-two weeks of pregnancy.

Kline’s move was the boldest of any state yet. And while preventing child rape is a laudable cause, it is clear that the Attorney General was really interested in going on a carefully calculated fishing expedition meant to impede the ability of Wichita’s abortion clinics to offer services. The added burden and potentially intimidating impact this effort would have on clinics and women seeking abortions was clear.

“It really is scary for patients,” said Priscilla Smith, director of the domestic legal program at the Center for Reproductive Rights in New York. “As more and more restrictions are placed upon abortion, there’s more and more opportunity for self-righteous and right-wing anti-abortion attorneys general and prosecutors to do these kinds of investigations.” Judge J. Thomas Marten of the U.S. District Court of Kansas agreed. In a scathing decision he blasted the Attorney General for his brazen disregard for state law, saying Kline’s “overexpansive” interpretation of Kansas law “not only fails to serve the public interest, [but] actually serves to undermine it.”

Last week’s Lawrence Journal World reported on a memorandum leaked anonymously and mailed to media outlets around the state. In the email memo, which Kline’s campaign has sheepishly acknowledged as legitimate, the candidate outlines campaign strategies blatantly seeking to blur the lines between religion and politics. “Get the pastor to invite 5 ‘money people,’ whom he knows can help,” Kline wrote in the four-page memo. “Goal is to walk away with contact information, money and volunteers and a committee in each church.”

Kline’s memo goes on to coldly hand down specific instructions for how to approach certain pastors: “Must rework Joe Wright and Terry Fox,” he wrote regarding two Wichita ministers responsible for generating huge support for Kansas’ constitutional ban on gay marriage. “Must get in their pulpits and have them personally host a reception to match Tiller’s blood money,” Kline writes, this time talking about Dr. George Tiller, a Wichita abortion provider. “Perhaps we can get Dobson by phone. Joe, Terry and Pat must commit to get 5-10 people there who can drop $1,000 to $2,000. This will take a lot of work, contact, work, and contact. This should be early to mid-September. Get me in their pulpits,” he wrote.

Get me in their pulpits?

Morrison was convinced of Kline’s insidiousness long ago, but if moderate Kansans were not sure before, the leaked memo ought to be the final straw: there can be no doubt now that Phill Kline is the kind of neoconservative fundamentalist Christian plundering American politics of late with its fanaticism. While Paul Morrison is no saint, he represents the kind of non-self-serving politician willing to sacrifice party membership for sane policies. Let Phil Kline and Fred Phelps have their theocracy—somewhere else.