Blue Thoughts from a Red State 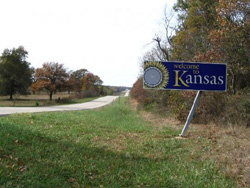 “Kansas and the face of AIDS”
Fundamentalist Christians like Fred Phelps immediately called it God’s retribution for the sins of San Francisco. But since June 5, 1981, after several seemingly innocuous cases led researchers to a disease that ravaged the immune systems of homosexual men, AIDS has taken the lives of 25 million people worldwide, leaving another 40 million folks infected. These days, explains Cameron Siemers, 24, who has been living with AIDS his whole life, it’s clear that “AIDS is not prejudiced. It will attack anybody.”

Once upon a time, however, that was far from accepted. Named unofficially as a gay men’s illness, President Reagan only acknowledged AIDS four years into the epidemic, after 12,000 people had already succumbed—and he didn’t even voice the word “AIDS” in public until 1987. Even Bob Hope made it into a homophobic wisecrack of sorts. “I just heard the Statue of Liberty has AIDS,” Hope joked in 1986 while speaking at a ceremony for the statue. “Nobody knows if she got it from the mouth of the Hudson or the Staten Island Fairy.” Indeed, it was only the merciless and unbounded march of AIDS through all walks of society that dismantled the myth of a gay-cancer, as it was called at the time. In red-state Kansas, for example, 1,447 Kansans have died between 1982 and 2005—many of them heterosexual men and women.

But things are not entirely grim here.

AIDS deaths in Kansas, for instance, have declined since peaking at 134 in 1994 to as low as 39 in 2005. Kansans like 24-year-old Laney Allbritten are among those fighting off the illness with at least modest success—making her and other like her nationally something of a new face on the epidemic: Americans living life under the shadow of AIDS, but controlling it through intense medication regimens. And though the disease once gripped the United States like it currently does Africa, the impossibility of living with AIDS in a developed country with access to medical technology is no longer so stark—making the tragedy of those dying without such resources even deeper.

As it was around the nation—and still is in many parts of the world—contracting AIDS in the 1980s was tantamount to receiving a death sentence. “The virus was devastating to people who got it,” Geri Summers, Douglas County AIDS Project Director told the Lawrence Journal-World last week. Summers, whose organization helps eighty percent of those with AIDS in the Lawrence, Kansas area explained, “A lot of what was done was palliative care—working with people in their homes, making sure they had what they needed to be comfortable [before dying].” Dramatized in the blockbuster Philadelphia, living with AIDS was clearly no life at all. Kansans—here, at what was at least in the 1980s, the homophobic heart of a homophobic nation—faired as poorly as anyone else, though they had the added slap of residing within hours of Fred Phelps Topeka, Kansas lair.

Those days are gone—or at least softened significantly. “We have clients who are still very healthy, who are working, who have families, who have a social life,” Summers says. “That wasn’t really true back then.” With medications that decrease the presence of HIV in the bloodstream, virus-carriers improve their chances of living lives with something resembling normalcy. Allbritten used to take seven pills every day. Now she’s down to five. The cost, however, of these medical miracles is around $1,500 per month. Demographically, she is, in the words of the Journal-World, “the modern face of HIV in America: a woman who contracted the virus through heterosexual contact, with a decent chance of a long and healthy life.” Though the life expectancy of a man in, for example, Botswana has been reduced to forty years because of the disease, in Kansas at least, AIDS is no longer an automatic death. This contrast, indeed, ought to inform the world as to what is possible in fighting AIDS—not just on the prairies of this state but everywhere.

Meanwhile, budget wrangling in Congress is frightening to those infected and affected by the disease. For people like Allbritten, the added stress of a Republican-controlled congress unwilling to make social spending a normal part of the budget is terrifying. As funding cuts are proposed and debated, millions like her find themselves jerked around by a political chain. “That’s my life,” Allbritten says tersely. Two years ago, President Bush made an impassioned plea for action against AIDS. He promptly cut funding in his proposed budget for the following year—though eventually Congress upped the funding from his meager proposal of 2 billion dollars (compare that to 87 billion a year for homeland security) to 2.4 billion dollars.

Funding finagles aside, researchers not far from where I write are hammering away at AIDS at the University of Kansas Hospital, home to Dr. Bill Narayan. Looking still for the Holy Grail—some sort of vaccine that would put an end to HIV instead of just containing it—occupies Narayan’s research time. Needed badly worldwide, but especially in third-world countries, a vaccine has been slow in coming. Nonetheless, Narayan says he is “optimistic as hell. We are working with a vaccine that looks good.” Narayan, according to local news, is focusing on a vaccine that he claims tested positively so far among monkeys. But “determining success,” the Journal-World reported, “could take years.”

Already, twenty five years have passed. And though the state of AIDS is both more dismal (the United Nations reports that worldwide only 1 in 5 HIV patients get the medication they need) and more hopeful (Narayan’s research, for instance) there can be little doubt that the situation has changed drastically. Kansans like Allbritten are, ultimately, a source of hope. Living their lives as “normal” human beings provides something of an inspiration to men and women worldwide—but the medications can’t be idealized into being. They require money. With steady funding and persistent support, Allbritten’s five pills a day can become fewer and fewer pills each day, and hopefully more effective, accessible pills as well. The possibilities for tackling AIDS in the next two and a half decades seem hopeful. And maybe by 2031, Fred Phelps will have gone permanently hoarse.