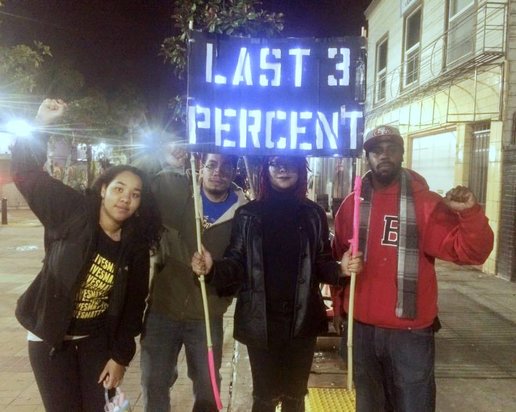 This story is prompted by a picket sign I saw at a recent anti-police brutality protest sponsored by two San Francisco families, one Latino and one Black, whose sons were shot dead in separate incidents following a barrage of police bullets.

Among the crowd of 150 activists standing in the pouring rain in front of the police-barricaded Bayview police station, were four young people holding a sign that simply read, “The Last 3 Percent.”

I thought their message was both powerful and poignant.

The words refer not directly to police violence but to the broader problem of the mass exodos of African Americans from San Francisco. Thousands have left their city of birth not because of any personal preference but because of political decisions and economic policies, many set into motion several decades ago.

Certainly, being one of the most expensive places to live in the entire world poses a challenge to the budgets of all working-class residents.

But, Black families are hit in particularly harsh and uniquely racist ways.

In a nutshell, as prominent San Francisco historian and veteran community activist Calvin Welch described to me, the city’s vast construction boom is designed to increase the value of property and to boost the profits of private developers instead of improving the lives of people and communities, especially those living on the sidelines of this great prosperous city.

It does not have to be this way, you can improve and upgrade property without displacing people but there would not be the same egregious profits of real estate interests and their wealthy, corporate and banking partners.

SF Mayor Lee is most responsible for housing policies and, according to Welch, responsible as well for most of the problems because the city, in short, “invests in buildings instead of in people.”

Karl Kramer agrees. Kramer is from the SF Living Wage Coalition that played a big role in the union/community coalition successfully promoting the city’s $15 an hour living-wage proposition that benefits around 100,000 residents, especially by July 2018 when the incremental wage increases mandated will actually reach the top bracket.

But, Kramer says, ” we still need to work on improving and expanding the San Francisco Community Jobs Program to serve as a genuine job-training program that will provide a  path to living wage jobs.”

Of course, this means chronically underemployed Black families and single mothers, in particular, leave the city because they can neither find work nor be trained for employment. “We are losing a whole generation,” Kramer predicted, “and it profoundly affects the diversity of the city.”

Destruction of one of the most vibrant Black communities in the nation began in the early 1960s as the Fillmore neighborhood, the “Harlem of the West,” was demolished as part of that era’s urban renewal.

Several years later when the “new” Fillmore finally opened with its refurbished housing and commercial buildings, several hundred of the traditional Black businesses and most of the previously displaced residents had already gone on with their lives, for better or worse, and never returned to the neighborhood.

In any case, after their dislocation, there was simply insufficient economic assistance for the former residents and the minority businesses to return. And, without the booming Black business economy that previously included 300-400 jazz clubs, bookstores, clothing shops and all kinds of other retail stores, unskilled Black youth found it difficult to find a job in the “new” Fillmore.

“In the old Fillmore,” Archbishop Franzo King, from St. John Coltrane African Orthodox Church, said with great pride during our conversation, “you did not have to go downtown, you could get a job in our community and get paid with a check signed by a Black business owner.”

“Redevelopment destroyed the Black middle class in the city,” historian Welch decried, representing a tragic example of increasing property values of a neighborhood while decreasing the living conditions and social status of the original residents.

It’s true, even though some African Americans still reside in the area, there are no identifiable cultural symbols reminiscent of its great past when the Fillmore hosted every prominent Black celebrity, politician and entertainer in the country.

And, only a few years after the Fillmore was again opened for business, the 1980 census recorded the city’s Black population at 86,000, its first decline since before WW11.

The descent continues unabated with the Black population in 2006 reported at 51,000, a reduction of 35% since the 1990 census. The most recent government census several years ago indicates Black residents represent six percent of the city’s population but fair-housing advocates and some city officials have been recently using the much-lower figure of “four percent and declining,” while other activists cite three percent.

Regardless of the exact number, no question, it all started with redevelopment of the Fillmore adversely impacting the economics of the Black community and, thereby, the demographics of the whole city.

The experience begs the question, who benefits from redevelopment?

Building Up, Pushing Out

After the Fillmore implosion, the Bay View working-class neighborhood became the area with the largest concentration of Black homeowners, mostly because it was near the Hunters Point Naval shipyards where around 10,000 Black workers had been employed since WW11, through the Korean War and after.

These workers had money to spend and the area thrived for some years. But, around the same time as the Fillmore was being torn down in the 1960s, a number of factors combined to shake the economic foundations of the Bay View.

Most devastating was when offloading of containerized cargo at the Hunters Point shipyards shifted to the Oakland docks across the Bay.

Now, once again, another thriving Black community was jolted, with thousands of good-paying shipyard jobs eventually lost in the Bay View. All the result of political and economic decisions made from the top.

As shipping technology began to change in the 1950s, San Francisco port authorities declined to upgrade their docks to accommodate containerized-cargo shipping, preferring instead to treat the land around the Bay docks as prime, coastal property investments, initially geared to tourism and, later, to upscale housing development.

Consistent with this vision, city planners and politicians also decided San Francisco would be a leading financial and commercial center. Of course, this also influenced who these planners saw as living in the city and it was their appointed Redevelopment Agency that carried out their designs.

Years later, as the city currently enhances its standing as a national tech center, there is a new redevelopment plan for how to accommodate the anticipated influx of tens of thousands of highly skilled and highly paid employees.

So, once again, reminiscent of the Fillmore, private property managers and city planners have instituted economic and political programs in the Bay View that accelerate the decline of the low-income Black community, leading to the further hemorrhaging of the population we see today.

San Francisco is geographically quite small, only 49 square miles, making its limited vacant land a premium in the extremely inflated real estate market.

So, the race for land is on. This is how unscrupulous property speculators come into the picture, devising any and all ways of acquiring new property for development which can be sold for astronomical profit.

It began anew with the displacement of longtime Black homeowners in the Bay View.

In fact, the Bay View became ground zero in the last decade for the now discredited and often illegal predatory lending system in place at the time. Salesman actually knocked on doors offering slick and dishonest pitches concealing reviled hidden mortgage balloon payments down the road.

These sleazy agents were better able to lure in Black homeowners who were mostly unable to obtain normal bank loans due to their debt or poor credit rating.

Again, accumulated economic hardships partially stemming from the closing of the shipyards decades ago. As a result, this vulnerable group, many of them seniors, was targeted for predatory loans more than any other neighborhood in San Francisco.

It led to an explosion of foreclosures.

Next, with land becoming ever more precious and scarce, private interests turned their attention to public lands which, amazingly, includes the demolition of public housing in the Hunters Point section of the Bay View and its conversion by private developers into “mixed-use” development.

This is truly highly valued public land, sitting atop hills that offers some of the best views and best climate in the city.

But, as one city housing official told me, “the government is out of the business of building public housing” and has turned it over to private developers.

“What all this means to me,” SF BayView editor Mary Ratcliff told me, “is that Blacks are being bulldozed from the Hunters Point section of Bay View. Simply put, Lennar and other private developers with city contracts believe they can more easily sell pricey upscale units if there are fewer Black folks living next door up here on the hill.”

Ratcliff’s respected national newspaper has published in the Bay View community since 1976. She has seen a lot and pointed out from her own intimate experiences that it was during this latest phase of redevelopment that “police occupation of the community intensified to fever pitch with gang injunctions, mass imprisonment of our youth and more targeted acts of police violence, all designed, I believe, to further push us out.”

This story does not yet have an ending and it won’t until the emerging voices of young Black community activists and organizations that stood in front of the Bay View police station have their say, in alliance with the growing coalition of fair housing advocates and progressive unions taking a stand for a more inclusionary vision of prosperity.

Carl Finamore is Machinist 1781 delegate, SF Labor Council, AFL-CIO. He lives in Hunters Point and can be reached at local1781@yahoo.com