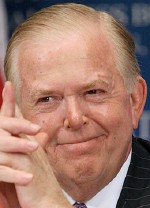 Do failed campaigns never end for the wacko right? Sporting a new “Kenyan” forgery, delusional “Birthers” recast Barack Obama as alien, subversive, not “one of us” – who won’t keep us safe. We’re back to “paling around with terrorists” and socialist-Muslim-Arab smears. The indisputable political aim: to unseat a legitimate president by outing him as foreign agent. This pathetic, sham impeachment hopes to nullify another Democratic president, a democratic election, indeed democracy itself. When do Democrats of all stripes rightly apply language Bush-Cheney misused for its critics: disloyal?

Let’s start by invoking Sarah Palin’s own truth quotient, “How about, in honor of the American soldier, you quit makin’ things up?” If “makin’ things up” dishonors the American soldier, “Birthers” are first in line, along with Glenn Beck, maligning Obama as a “racist,” with “a deep-seated hatred of white people.” What about Palin making it up, that fairy tale she resigned only for the good of Alaska? The good news: public disgust with conspiracy-apologist Lou Dobbs has so eviscerated him, even Rush Limbaugh shrunk back into his hole on this charade.

Perhaps we patriots should demand “Birthers,” and their two dozen elected Republican defenders, prove their own citizenship by showing their original birth certificates? We real Americans don’t want slimy subversives slurring our president and the state of Hawaii. This conspiracy transforms Obama, our government and country, into huge frauds, reinforcing Bill Maher’s quip, in America there’s “no idea so patently absurd it can’t catch on.” In this battle, Maher pits “sentient beings vs. the lizard people.”

Since “Birthers” are shredding whatever GOP dignity remains, in puzzlement we may dream our own conspiracies to explain the inexplicable. Are irate screamers really double-agent Democrats driving the GOP off another cliff? Or white supremacists, dividing party conservatives, to force an all-white third party? Perhaps “Birthers” are simply ignorant, paranoid, enraged bigots who can’t stand having an elected president forbidden to marry their daughters? You think?

If “Birthers” forego their state of delusion, they’d find the American state of Hawaii. Not only don’t “Birthers” accept certified copies (on which the world turns), nor triple confirmation by Hawaiian officials (upstart foreigners), nor 1961 newspaper notices, nor Obama’s State Dept. passport – they impugn our inaugurated president as both unAmerican and anti-American. Of course, there’s a term for those in free-fall from facts, tobogganing downhill on a fantasy sled into myopia: mental illness.

Now if “Birthers” made a stink over the Arnold’s foreign birth, or the racial bias of southern Senate dinosaurs, we might learn something. These folks talk funny, they think funny, and they war on the majority. Likewise, Oklahoma’s outlier Sen. Imhoff, who likes “Birthers” but defies evolution and global warming as liberal hoaxes. If Dick Cheney were outed as an invader from the lunatic planet Torture Works, who would bat an eyelash? Cheney thinks Scooter Libby “innocent,” victimized by a dreadful “miscarriage of justice” who deserves pardon (why not a Medal of Freedom?). Talk about crazed, alternative realities.

The Greatest Con Job in History

In fact, Obama sounds American, acts like a loyal American, went to American colleges, became an American lawyer and Constitutional expert, served in the American Senate and, for a guy with mixed parentage, looks, well, American. Plus, who imagines that tough, sensible Michelle Obama would marry some crazy-ass Kenyan illegal, a socialist-Muslim-Arab to boot, to father precious daughters? Unless Michelle isn’t a real American, either. What if her slave ancestors, 150 years ago, were incredibly farsighted subversives who planned her marriage to this illegal to win the White House and “africanize” our good, white, Angle-Saxon Christian nation? I mean, really, show me contrary facts.

Don’t “Birthers” realize what it means if they’re right? That our entire world has been subverted – Obama’s life, grueling primaries, nominations, the election, Electoral College, Congress, the Supreme Court, the FBI, even the hallowed CIA. If “Birthers” are right, everyone else is wrong: the entire federal bureaucracy, the Pentagon, every general, every obedient G.I. – they’ve all been faked out and defrauded, duped as no group in history has been duped. If Obama is not a natural-born citizen, he’s not only our first minority president, but the greatest con artist in the history of mankind.

Frankly, I doubted rightwing wackos would so rapidly displace stunted Teabaggers or terrifying “C” Street demagogues. But then, who expected southern senators to attack Sonia Sotomajor not on law but ethnicity or toughness with slippery lawyers? Who figured McCain outdoing himself, after Princess Sarah, by glorifying that wodge of white prejudice, Joe the Plumber? Or Palin declaring herself the heroic champion of the people by quitting? Whenever we think, “This must be the threshold,” up pops more rightwing goofballs with the next WTF chicanery.

This Fringe Makes the Right Cringe

Whatever the passing absurdities, reality and the future still loom: will this conspiracy take the cult of Republicanism over the line, equating it with mental illness? How many mortal blows can a party take before succumbing? The onslaught kicked off by Bush, Cheney, and Rumsfeld, advanced by McCain-Palin, now endures the “Party of No,” Teabaggers, secessionists, and mounting GOP adulterers and hypocrites. Forever revving up the next outrage are millionaire media loudmouths, ideologues hell-bent on political assassination against elected leaders so they “fail.”

If Republican extremists want to challenge this president’s legitimacy, that’s what impeachment is for. That demands evidence of criminal actions, not just an unsettling majority of Republicans polled who won’t confirm Obama as American-born. Fortunately, 60% of Americans stand by Obama, and this GOP fringe is in fact dividing conservatives, making its own rightwing cringe. That’s the one positive oozing from seditious posturing: its defenders, Dobbs or Limbaugh or southern dinosaurs, are challenged by their won suspect rightwing posturers, named Bill O’Reilly, Ann Coulter and Karl Rove. OMG, what a revolting development that is! Perhaps the lizard – and anti-lizard – contingent can fight it out while sentient adults address health reform, two wars, and how to protect the earth.