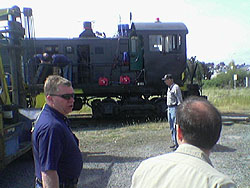 Last Friday, a 5 man team from California’s Air Resources Board arrived at the San Francisco Bay Railroad yard to test a variety of biodiesel blends on locomotive engine number 25, the first train to successfully run on biodiesel in San Francisco. “You are witnessing history people”, proclaimed David Gavrich, President & CEO of the SFBR, formerly known as LB Railco. The test results from CARB will likely not be known for some time, however the smooth operation of this 1946 diesel engine bodes well considering the large amount of aging locomotives still in operation in the U.S. today. There is hope for many of these necessary relics with the assistance of the SF Department of the Environment and the BAAQMD, (Bay Area Air Quality Management District) “Carl Moyer” grant programs to help refurbish them. Gavrich, a recipient of two such grants applauded the Moyer program, however for some locomotives, they aren’t an option. “Some of the parts and infrastructure for these older engines aren’t cost effective”, he explained. “Biodiesel offers another alternative in the interim”.

Fellow SF Biodiesel Access Task Force member and president of the San Francisco Biofuels Cooperative Eric Bowen, joined me on several quarter-mile tests with CARB’s crack team. With a hearty “All Aboard”, we were off and running. CARB came armed to the teeth with laptops and state-of-the art software, laser timers, generators, sensors and more.

“It will be great to see the Port doing this next”, Gavrich opined, and Bowen, also a member of the Biodiesel Access Task Force’s Marine Subcommittee agreed. They may be right, as the infrastructure and cost effectiveness of doing business along the water ways, powered by alternative fuels, safely and responsibly makes a lot of sense.

With the first set of tests completed, Gavrich briefly departed and quickly returned with another fresh supply of 55 gallon drums of “B100” or pure biodiesel from SF Petroleum, the City’s supplier of biodiesel to MUNI, it’s entire diesel fleet as well as an estimated 100 members of the SF Biofuels Co-op. “This is only the beginning gentlemen!”, proclaimed Gavrich, a long time alternative fuels advocate. Gavrich has two locomotives, circa 1946 in his yard; a host of diesel powered lifts and vehicles he plans to use biodiesel on. Gavrich also hosts many of the truckers from the Bay View Truckers Association, and it’s president, Michael Dennis hopes to get many of his members on board. Rising fuel costs are a barrier for many these days, however a variety of options and talk of local biodiesel production are being explored.

Gavrich and Bowen also agree that diesel engines will be with us for a while, and until other viable alternatives can be made available, biodiesel, preferably made from sustainable sources, may be one of the best options we have to mitigate some of the effects of global warming and green house gases. New studies and research by the EPA and others may show that NOX emissions from biodiesel may well be less than originally thought, with an increase perhaps as little as 4%. At a recent biodiesel roundtable, Dr. Randall Von Wedel, a leading expert on biodiesel here in the Bay Area, explained that the earlier testing on NOX were outdated, and used a very limited type of engine and conditions to produce a higher NOX score.

Next year, San Francisco will host the annual National Biodiesel Board Conference, and in March of 2009, the City’s Green Public Works Ordinance will go into effect, which means any city contractor engaged in public works with diesel vehicles for more than twenty days, must either have their vehicles fitted with particle traps, or use a minimum blend of “B20” biodiesel, 80% petroleum and 20% biodiesel. With City’s entire diesel fleet and MUNI now running on B20 biodiesel through the efforts of the Department of the Environment, and the Public Utilities Commission’s “Greasecycle” program, collecting waste veggie oil from participating restaurants and turning it in to biodiesel; both with the aid of the SFBC, San Francisco finds itself at the center of the nation’s debate on the positive merits of alternative energy and the need to become a more sustainable society.

Gavrich’s dream of his railyard, powered by biodiesel must also now be added to the mix. The success of these endeavors will be watched closely indeed. If we get it right here, California and others will surely follow.

E. “Doc” Smith is a member of the SF Biodiesel Access Task Force and the Director of Green Depot, a non-profit organization funded in part by the SF Department of the Environment, advocating the use of biodiesel, particularly in Bayview Hunters Point and Potrero. He can be reached at esmith@greendepot.org