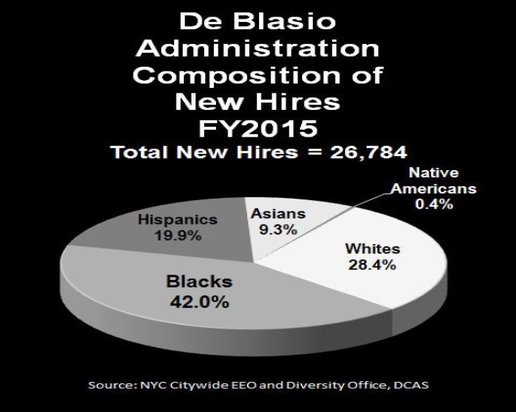 Mayor Bill de Blasio might as well hang an “Aquí No Se Habla Español” sign on City Hall’s front door.
This is supposed to be “our” time. New York City’s population is one-third white, 29 percent Hispanic, 25 percent black, and 19 percent Asian, according to the most recent U.S. census. Our numbers are growing so fast,
Univision is the highest Nielsen-rated television network in the metropolitan region.
But Latinos are still denied a seat at the table, a fair share of resources, and jobs despite the election of a supposedly progressive mayor, who studied Latin-American politics at Columbia University, speaks Spanish, and supported the Sandinista movement in Nicaragua.
Posted online this month, a 36-page report that the city Department of Citywide Administrative Services submitted to the U.S. Equal Employment Opportunity Commission on Sept. 25, paints a black-and-white picture of de Blasio’s hiring patterns since becoming mayor.
Unfortunately, this report only categorizes the data by general government function. Unlike his predecessor Michael Bloomberg, de Blasio has yet to publicly produce a workforce report that would provide a detailed demographic breakdown by individual city agency.
Hispanic leaders have repeatedly raised concerns about the lack of representation in city government since de Blasio’s 2013 transition. (His transition team was led by a white man and an African-American woman.) The city’s report validates their concerns. Actually, it shows the situation is far worse than they thought. Hispanic workers rank fourth, after whites, blacks and Asians, in de Blasio’s City Hall. Hispanics also rank a distant third in the number of jobs doled out by the de Blasio administration during the mayor’s first full fiscal year, which ended on June 31.
It is clear that the mayor is rewarding the voting bloc that put him in office, and one he needs to win a second term, with nearly half of all the new city jobs he gave out in his first fiscal year: 43 percent of de Blasio’s new hires were black, while 28 percent were white, 20 percent Hispanic, and 9 percent Asian, according to the Department of Citywide Administrative Services. That makes de Blasio’s overall hiring rate of blacks to Hispanics just over 2 to 1.
These jobs are important. Hispanics are the poorest of city residents, according to the Community Service Society’s analysis of census data. The most dispiriting of their recent reports found that 8 in 10 children of Mexican descent live below 200 percent of the federal poverty line.
Well-paying, unionized public-sector jobs would go a long way toward lifting Hispanic individuals, families and communities out of poverty. Additionally, these jobs increase an individual’s eligibility to get a mortgage and become a homeowner.
Yet Hispanics filled merely 14 percent of the new agency professional staff jobs that pay $70,000 or more a year. Thirty-three percent went to whites and another 33 percent went to blacks.
Giving Latinos a seat at the table where policy is shaped, programs are implemented and resources are allocated is arguably even more critical than the jobs issue. But only 13 percent of senior agency officials in the de Blasio administration are Hispanic, according to the Department of Citywide Administrative Services. Sixty-one percent of de Blasio senior agency officials are white and 18 percent are black.
Hispanics have the least representation among the leaders of the city’s public welfare agencies tasked with uplifting Latino city residents in poverty.
Merely 15 percent of de Blasio’s commissioner-level appointees at the Human Resources Administration, Department of Homeless Services, and Department of Youth and Community Development, including assistant, associate and deputy commissioners, are Hispanic. Nearly half are African-American. One-third are white.
This is a serious problem in a city that has long held the distinction of being home to the poorest congressional district in the U.S., the 15th Congressional District, which covers the vastly Latino South Bronx.
The Department of City Planning and Landmarks Preservation Commission have the fewest Hispanics in their leadership: 6 percent. Seventy-percent are white and 10 percent are black. This is depressing. We are poised to become the majority of the city’s population in this century, yet we have little say in how this city is being shaped.
Housing is another prime example of how the lack of representation of a community in an agency’s leadership impacts the delivery of services.
The city’s affordable housing program is de Blasio’s top priority. Applications for affordable housing units do not have a Spanish-language Internet portal that residents with limited English proficiency can access. Naturally, only 8 percent of the senior officials at the Department of Housing Preservation and Development and the Department of Buildings are Hispanic.
The city health agencies provide another example of how racial disparity in city government hurts New Yorkers. The Bronx is the unhealthiest county in New York state, according to the Robert Wood Johnson Foundation. More than half the population of the Bronx is Hispanic. The percentage of senior officials at the Department of Health and Mental Hygiene and the Department for the Aging who are Hispanic? A mere 11 percent.
De Blasio ran a campaign based on a “tale of two cities.” One rich, one poor. Before the ink was dry on his election returns, he was jetting across the U.S. touting his vision of progressive politics to correct the economic disparities in this city and nation.
But a core value of American progressive politics since World War II has been community empowerment. When de Blasio shafts the second-largest and fastest-growing portion of New York City’s population so spectacularly on jobs and access, he is worsening racial disparities and creating a new narrative, a tale of three cities: one white, one black, and one brown.
Eddie Borges is directing a documentary about Mexican and Puerto Rican child poverty in New York City. He can be reached at edwardborges@childpovertyus.org.
_______________________________________________________________________________________________________
This piece first appeared in the NiLP Report on Latino Policy & Politics,  an online information service provided by the National Institute for Latino Policy. For further information, visit www.latinopolicy. org.