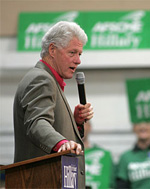 When asking Nevada culinary workers on Tuesday to ignore their union’s endorsement of Barack Obama, former President Bill Clinton called his wife the “insurgent” in the race – and Obama the “establishment” candidate. It was an odd statement, for nobody can seriously dispute that Hillary Clinton is the Democratic Party’s establishment choice. And while UNITE-HERE, the Culinary Workers and Nevada SEIU have rallied behind Obama, hotel and casino executives are largely supporting Clinton.

What the ex-President meant to say was that culinary workers should make up their own mind — regardless of what their union recommends. But the Nevada teachers’ union (which supports Clinton) has ignored pleas from their own rank-and-file members to drop a lawsuit that, if successful, would prevent casino workers from voting in Saturday’s caucus. The party decided months ago to have “at-large” precincts inside Las Vegas casinos, but now some Clinton partisans – including Bubba – want them shut down because attendees are likely to support Obama.

“In this case,” said Bill Clinton at a rally in Sparks, Nevada, “the establishment organization is with [Obama] and the insurgents are with her.” According to USA Today, he then asked for a show of hands from 50 precinct captains in the audience and challenged them to stand up to their union’s leadership. “They think they’re better than you are,” he said, “at identifying and getting people to their caucus sites. And I bet they’re wrong.”

Bill Clinton’s comment – which hearkens back to when he lied about having opposed the Iraq War – is so laughable that I won’t offer a detailed response. Hillary Clinton was the President’s wife, and used her status to move to New York and run for the U.S. Senate. She has enjoyed wide support from elected officials ever since announcing her candidacy, and has touted “experience” as her strongest asset. Most presidential primaries boil down to an “establishment vs. insurgent” rivalry, and it is quite obvious here that Clinton is not the “insurgent.”

In Nevada, we’re also seeing a “labor vs. management” rivalry between the top two Democratic candidates. The unions who represent casino employees are for Obama, whereas the bosses largely support Clinton. According to data at OpenSecrets.org, Clinton has raised 3 times as much money from gambling interests as Obama – including donations from C.E.O.’s of Nevada’s 3 largest casinos. Las Vegas Congresswoman Shelley Berkley, who endorsed Clinton last week, is the former Vice President of Sands Casino – and served as chair of the Nevada Hotel and Motel Association.

But Clinton has one large union endorsement: the Nevada State Education Association – which represents teachers. And now the union’s leadership is trying to make it harder for culinary, hotel and casino workers to participate on the January 19th caucus. Because the Nevada caucus is on Saturday at 12:00 Noon, teachers won’t be working and can go to their home precincts – but many employees on the “Strip” in Las Vegas will. So in March 2007, the Nevada Democratic Party set up nine “at-large” caucus sites in various hotel-casinos in Downtown Las Vegas – so that these workers can participate while on their lunch break.

Now that the Culinary Workers have endorsed Obama, the Teachers’ Union is suing to shut down these “at-large” caucus sites. They say that it’s discriminatory because the Obama camp would have a built-in advantage. While the Hillary Clinton campaign pretends to have nothing to do with the suit, many prominent Clinton supporters are on the board of the Teachers’ Union – and the law firm that has taken this suit to court has close ties to the Clinton campaign. Moreover, Bill Clinton has publicly supported the suit – and got defensive when called out on it.

When Bill Clinton told the culinary workers to defy their union’s endorsement, he strongly implied that the union leaders don’t represent the workers. In other words, union members should make up their own minds. But not all Nevada teachers are happy with their union trying to block other union members from caucusing. In an open letter to the Nevada State Education Association, 15 public school teachers demanded that their union drop its lawsuit – noting that many of the workers affected are parents of their students.

“This lawsuit is all about politics,” they continued. “It’s widely known that many of our union’s top officials support Senator Clinton and now that the Culinary Workers Union has endorsed Senator Obama, they’re using our union to stop Nevadans from caucusing for Obama. We never thought our union … would put politics ahead of what’s right for our students, but that’s exactly what they’re doing. As teachers, and proud Democrats, we hope they will drop this undemocratic lawsuit and help all Nevadans caucus.”

As I explained last week, Hillary Clinton won the New Hampshire primary because the voters want change – and enough believed that her mere status as a woman embodies change. They voted for Hillary – as opposed to Clinton – and it’s no accident that the Clinton camp has campaign posters that say “Hillary for President.” But if voters conclude that her candidacy is about prolonging a dynasty, she will lose the Democratic nomination.

This is why Bill Clinton is such a liability for her – voters may be nostalgic about the 1990’s compared with now, but they don’t want to empower a political family like this. He lied about having opposed the Iraq War, said he can’t make Hillary “taller, younger, male,” called Barack Obama’s campaign “the biggest fairy tale,” and now he’s gone so far as to say that she’s the “insurgent” in the race and Obama is the “establishment.”

If the Clinton campaign were smart, they would tell Bubba to shut up and keep him out of the spotlight. But I don’t expect the former President to keep his ego in check. He just can’t help making himself the news story – which is why he’ll continue to do damage to her campaign. And that’s why Obama supporters should keep the audacity of hope.

UPDATE: I have since been informed that unlike the unions who have formally endorsed Obama, the Nevada State Education Association has not taken an official position as an organization. What this means is that the leadership in the teachers union is allowing their personal partisan views cloud their responsibility as stewards of their unions. Many top officials at the Teachers Union are involved in the Clinton campaign, but they cannot use their status to help Clinton until the union takes a formal position.