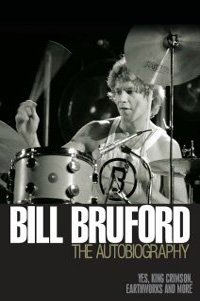 Bill Bruford is no doubt one of the most influential percussionists England has ever produced. His work with the progressive rock groups Yes, King Crimson, Genesis and Gong are the stuff of legend. His love of jazz and his admirable forays into that realm with his group Earthworks and later, with pianist Michiel Bortslap have earned the kudos he so richly deserved. Bruford retired from public performance this year, to tend his massive catalogue, garden and spend time with his wife. We will miss seeing him live, but no one can blame him. His career has been one virtually any drummer would kill for, and in his wake he has left another gem, “Bill Bruford, the Autobiography”. This fascinating, poignant and yet bittersweet tome recounts his journey as only he could tell it, and answers many of the things you may have wanted to know, but were afraid to ask. The historic era which gave rise to Britain’s progressive music scene, the rise and fall of the world of music as we know it today, through the eyes of one who has truly seen it all, and then some.

I’ve been extremely fortunate to have seen most of Bruford’s American performances; from King Crimson in ’73, to his shows at the Iridium in New York in ’07, a span of over thirty years, so many of the stories and groups he writes about were very familiar to me. That being said, Bruford’s tale will speak volumes to those wanting a deeper understanding of how he came to be a true musical pioneer.

From his humble beginnings in England’s Sevenoaks, Bruford recounts obtaining a pair of brushes from his sister and before long applying them to a sheet of cardboard. Soon he found himself in possession of a “red sparkle” drum set and a legend was born. Bruford was also fortunate to have grown up in England during the era of the Rolling Stones, Jimi Hendrix, Cream and of course, the Beatles. Harrowing tales of late night drives for “last orders” after gigs; his contempt for the egos and the cardinal sin of keeping other musicians waiting; crafty and larcenous managers are all detailed and hilariously well documented.

Bruford’s success with Yes would propel him and his fellow bandmates into the limelight; his departure following their painfully made, but extremely successful album “Close to Edge”, found him in the headlines once again. Not for joining the incredible King Crimson, but for leaving Yes at its height. Nevertheless, Bruford’s pairing with the enigmatic Robert Fripp would lead him down a path of innovation, exploration and acclaim for the next several years.

Following King Crimson’s “disbandment” in ’74, Bruford found himself in a journeyman’s role with several of the well known prog-rock groups of the day; the French/Anglo group Gong and following Peter Gabriel’s departure, he shared the drum duties with Phil Collins in Genesis. These adventures and others, led him to co-found “UK” with Alan Holdsworth of Soft Machine, Eddie Jobson of Roxy Music and former Crimso bandmate John Wetton. UK was ahead of its time and its greatest strength was perhaps also its biggest weakness. Bruford recounts this period in vivid and insightful detail. I managed to catch this one of a kind combo at Painter’s Mill, Maryland in ’78, opening for Al Dimeola in a truly unforgettable performance.

Sadly, UK with Bruford was not to survive, “too much, too soon, too heady”, Bruford recalled. Not one to be daunted, Bruford soldiered on with Dave Stewart, (not the bloke from the Eurythmics), bassist Jeff Berlin and Holdsworth in a combo under his own name. Those of us who recalled seeing Holdsworth briefly with UK and with the late Tony Williams were thrilled with his efforts on Bruford’s first two solo efforts, particularly “One of a Kind”. Holdsworth didn’t tour with this combo, however Bruford fills us in on the history of Holdsworth’s subsequent replacement, the “unknown John Clark”.

The 1980’s saw Bruford return to the “bed of nails” he calls King Crimson, this time with the phenomenal; bassist/Chapman Stick player Tony Levin and fresh from Frank Zappa and the Talking Heads, guitarist Adrian Belew. Like many, I was a huge fan of this particular incarnation of King Crimson. Bruford’s pioneering use of the electronic Simmons Drums and roto-toms gave the drumming world an “almighty clattering sound” that still stands the test of time. Some of the Bruford’s most revealing passages are among this chapter and makes for riveting reading.

One of the things I most enjoyed about this book, (being a self admitted Bruford fan), was the back story on so many of his sessions during that era. One of my favorite pieces, is a tune entitled “Calliope” from Al Dimeola’s album “Scenario”. This rare gem features Bruford, Levin, and Jan Hammer. Recorded at Caribou Ranch during the newer Crimso era, Bruford reveals an amazing story about how that song was made that had me laughing out loud. There are many others like that, many sessions I’ve always wondered about. Bruford answers those mysteries and more; Kazumi Watanabe; Jamaladeen Tacuma; The New Percussion Group of Amsterdam; Ikira Inoue and his sessions with David Torn. I’m surprised he didn’t mention the session King Crimson did with the Roches on “Keep on Doin’ What You Do” several years ago. On second thought, it wasn’t much of a session, but it’s one of the best Roches songs I’ve ever heard, even if Bruford is only playing bells and a tamborine.

With King Crimson on continual hiatus or Fripp adding a “double trio”, Bruford surprised everyone again by creating his forward thinking jazz ensemble Earthworks. I was mesmerized by this group when they first appeared in ’87. Bruford’s blend of electronic percussion, “chordal drums” and samples alongside Django Bates, Iain Ballamy and Mick Hutton was breathtaking. The inside story of the creation and rebirth of Earthworks will leave you astounded and Bruford’s candid retelling is one of the best in the book.

Bruford’s long love affair with electronic drumming would soon come to an end, culminating in an unforgiving computer crash/meltdown at a Yes “Reunion” show in New York, (a tour Bruford rightly and ruefully recounts). Bruford once told me, “Everything is designed to go bad.” With his electronic days behind him, Bruford remade Earthworks as an all-acoustic line-up in the mid ’90s, complete with his timpani-style drum set-up. If had thought that the electronic version was going to be tough to match, I was mistaken. The gorgeous piano playing and writing of Steve Hamilton/Gwlym Simcock, the saxes of Patrick Clahar/Tim Garland, and the bases of Mark Hodgson/Lawrence Cottle, coupled with some of the best writing Bruford has ever done, made Earthworks Mark II and III one of the best jazz ensembles of our time. His musical “conversations” with Dutch pianist Michiel Bortslap were equally enjoyable and I was fortune to catch their performance at the Bath International Music Festival in ’07. Those performances were recorded live and were the basis for their third effort together, “In Two Minds”.

There are many, many more stories in this well written tome; his dedicated wife Carolyn; the creation of his album “If Summer Had It’s Ghosts” with Ralph Towner and Eddie Gomez, but perhaps the most telling is Bruford’s assessment of the modern music machine. Having experienced the industry as perhaps no one else has, Bruford’s unique perspective on the good, bad and ugly business of the profession we call music is perhaps the most telling. Gone are the days when you and your chums could pack off to a gig and seek your fortune in the heady new era of rock and roll. These days, where anyone and everyone can make records in their bedroom, has changed all that and not necessarily for the better. We now live in a world where MP3s, DVDs, DJs and laptops seem to rule the day. Jazz it seems, is too often guarded by the retro-driven. There is simply too much music out there and not all, if not most of it, is much good. The culture of youthful marketing and the competition for your listening pleasure and the almighty Euro/Dollar continues to grow.

Too often, the greats stay too long in an attempt to reach the heights again. Bruford, like the wise champion who has scaled every height, has decided to leave the game on his own terms. That’s something he has become famous for and it’s how he’ll no doubt be remembered. Bruford isn’t dead, far from it. This fall he’ll be releasing a much anticipated album with England’s “Piano Circus”. If you haven’t seen them, imagine six stellar pianists arrayed in a circle, place the enigmatic Bruford in the middle, shaken, not stirred. The result will be just as you might imagine from a musician that in this writer’s opinion rarely, if ever disappoints.

Kudos to Bruford for this informative, personal and moving autobiography. There is no doubt, he will continue to roll.

E. “Doc” Smith is a musician and recording artist with Edgetone Records, who has worked with the likes of Brian Eno, Madonna, Warren Zevon and Mickey Hart among others. He is also the inventor of the musical instrument, the Drummstick. He can be reached via http://edgetonerecords.com/edoctorsmith.html