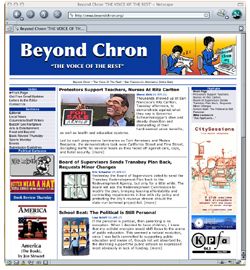 One year ago, Beyond Chron was launched to cover news either ignored or distorted by the San Francisco Chronicle. Since that time we have not only broken key stories otherwise uncovered in the media, but Beyond Chron has become an organizing tool for campaigns to oppose MUNI fare hikes, for those skeptical of Redevelopment, and for those seeking new and creative strategies for increasing affordable housing. We have learned much about the media and San Francisco since launching Beyond Chron, and will continue putting these lessons to work in the months ahead

We decided to launch Beyond Chron in the wake of the 2003 Newsom-Gonzalez mayoral runoff. The Chronicle’s coverage of this race was so one-sided toward Newsom that a daily on-line counterweight to such bias was clearly needed.

Our intention was never to conceal our own editorial biases. Rather, our goal has been to provide the facts that have led us to support a particular stance.

On many stories— the new wave of Ellis Act evictions, the lower Potrero Hill rezoning, Mid-Market Redevelopment, city giveaways to the rich, and the high price tag of the mayor’s anti-litter campaign-Beyond Chron has often provided the only coverage.

In some cases, such as last November’s losing housing bond, Beyond Chron has exposed the hollowness of a “consensus” reached at City Hall and pushed progressive supervisors to demand a better deal. Chris Daly noted at the Board of Supervisors meeting this week that Beyond Chron was the only news source to reveal the controversial background of millionaire Republican bike race promoter Thomas Weisel.

Beyond Chron broke the story of how the post office refused to deliver mail to residential hotel (SRO) mailboxes. Our story was picked up by other media and led the Mayor to demand that mail be delivered. Similarly, since we publicized the Redevelopment Agency’s potential displacement of the Bindlestiff theater company from Sixth and Howard, there has been an outpouring of support and the Agency is talking about protecting the theater’s future.

We have been most troubled by the Chronicle’s reinvention of San Francisco history. That’s why we devoted a special edition to the Chronicle’s repeated and false claims that Newsom is the first Mayor to address the problems of Bayview-Hunters Point, (None Dare Call it Propaganda: The Chronicle’s Biggest Lie About Gavin Newsom).

Mayor Art Agnos not only distinguished himself with his personal involvement in addressing gang violence and other problems in Bayview, but he also set San Francisco on a new direction in city homeless policy that continues to this day. Similarly, it was Mayor Willie Brown who started the hotel leasing program that has become the centerpiece of Care not Cash. The Chronicle can praise Mayor Newsom’s efforts in these areas without disparaging the contributions of prior mayors.

The local media’s hero worship of San Francisco’s Mayor has left Beyond Chron as the sole news source that seeks to hold Newsom accountable. Our stories on the Mayor’s failure to actively campaign for the housing bond, and his refusal to meet with small business groups in preparing Prop K, the business tax increase, have led some to accuse us of being “anti-Newsom.” It is a sad comment on the state of our local media that subjecting our current mayor to the same level of scrutiny imposed on prior mayor’s is now seen as demonstrating editorial bias.

Unless the Chronicle is reinventing history or throwing softballs at the Mayor, too few people are reading Chronicle stories to justify regular critiques. For example, we are regularly asked why we do not write stories refuting claims in Kevin Fagan’s long-running “Shame of the City” series. As tempting as it is—and I really wanted to bash Fagan for claiming that the Tenderloin’s Dalt Hotel was among the worst in the city during the 1990’s when in truth it was one of the best—we found that even people working in homeless programs have stopped reading Fagan’s pieces.

It is not easy putting out new material every weekday, and sometimes our coverage falls short of our standards. We recently did an update on the controversy regarding the building of a highway in Golden Gate Park and due to time constraints relied too heavily on a single source. These mistakes happen, and we appreciated the reader feedback on this and other stories that enabled our readers to get a more accurate account.

Beyond Chron has also fallen short of its goal to provide cutting-edge cultural coverage. I was advised early on by Alex Clemens of the Usual Suspects site that people who come to Beyond Chron will not be interested in cultural stories. We tried to attract the cultural crowd by including prominent local writer Michelle Tea and by including a creative food column, but readers were not drawn to these pieces. If you are interested in doing cultural criticism for Beyond Chron and think you have an angle that will get people to read your work, please let us know.

When we began in April 2004, local progressives were in the doldrums over the Newsom mayoral victory and Matt Gonzalez’s surprising decision to leave politics. Today, we have seven votes on the Board of Supervisors in defense of protecting tenants and Gonzalez’s replacement, Ross Mirkarimi, has demonstrated that he seeks to move the city in a progressive direction. We’re stuck with George W. Bush for four more years, but the nurses, teachers and firefighters have destroyed the teflon that once protected our Governor.

Thanks to Lisa Schiff for her outstanding weekly column, School Beat, Marc Norton for his ongoing exposes of economic goodies for the elite, Tiny at Poor News Network for all of the stories she provides that would otherwise be excluded from the media, and all of the others who contributed to our pages during our first year. On behalf of Managing Editor Casey Mills and myself, we look forward to another year of trying to build a more progressive San Francisco.